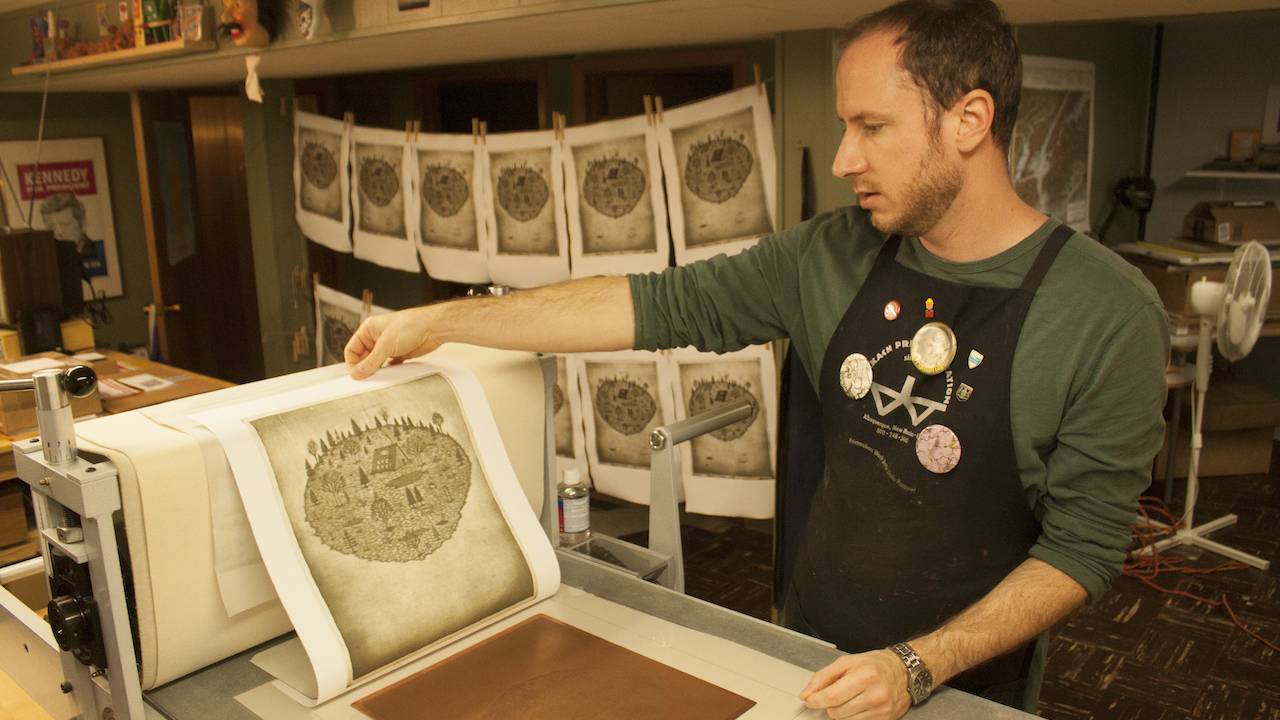 "I’m a basement dweller," says Andrew Kosten. And it's true, literally. He does bank major dwell time in the basement studio of his Brookings home, cranking (again, literally) out intaglio vignettes from the world inside his head.

From this world, strange, forlorn and fantastical characters conduit via pencil onto the pages of his many sketchbooks. Then his work begins. And work is his m.o.

Printmaking through the traditional etching method is a labor-intensive process.

“It’s a very physical process. That’s what I really love about the process is its physicality. That’s why I’ve chosen to make prints is I’ve been in love with the process since I first did it.”

“I was a painter before I was a printmaker. I did still lifes. I had a fixation with objects and formal aspects of spaces and color relationships as they were represented in these still lifes."

"My work wasn’t really about a whole lot. It was just about painting. But I had a separate body of work in sketchbooks. People were like, ‘You need to be doing this.’”

The Memphis, Tennessee native took a printmaking class at Washington University in St. Louis and, like a printer's ink, he found a niche.

“[The University of South Dakota] was put on a shortlist of grad schools to look into. Initially I was like, ‘South Dakota?’ And I put it on the bottom of the list. I visited Vermillion and I was attracted to the calm and the spaciousness. I could tell this was like going off somewhere and just focusing on your work. I was able to get a lot done there.”

He was able to study under the legendary longtime instructor-artist and Frogman's Print Workshop founder Lloyd Menard in his final years at USD. "He taught me much of what I know about etching."

After grad school, Kosten took turns at several teaching posts before he ended up pulled back Corleone-like to the Plains. This time, Brookings (where he lives with fellow artist and partner Diana Behl).

Kosten's art seems to draw more from an inner well then his adopted home, though you'll find elements of prairie solitude in his work if you're looking for them.

“I think I’ve absorbed the sense of openness, the open spaces — the idea of mapping your observations. Spatially there’s a way the work has opened up in a way that’s new for me. Whether or not you can contribute that to the locale I don’t know.”

There's a kind of whimsical reminiscence in his work, though one that seems to recall the bygone days of another dimension. But maybe that's memory. Whether the pining kind, or even the good-riddance variety, images of the past are altered in the mind's eye by time and subconscious agendas.

If the characters from Kosten's world seem somehow familiar to you, it might be hard to articulate how exactly, buy hey, there they are. (Where you been, Big Smokie?!)

“I’ve always been an avid collector. Going back to my childhood, I’ve had collections of things that were more about a fixation or fascination with that particular object and the feelings or nostalgia they evoked.”

A first-generation Sony Trinitron delivers vivid aperture grille TV technology to his studio. In a hobby room off his studio he has a collection of box turntables, cassette decks and curly-cord analog phones.

"Much of what influences my work is the experience of the every day and how I can mix that in to this dark and comical world I create in some of the imagery."

The dreamy tonal quality of his prints is an effect of the aquatint technique he uses in parallel with the traditional etching process.

He starts with a drawing and a clean copper plate, coating the plate with a waxy, acid-resistant ground. To create the aquatint effect, he applies rosin to the plate then heats the rosin for an evenly distributed coat, then uses a scraper tool to create varying gradients of shade.

He scratches the drawing into the ground with an etching needle, then gives the plate an acid bath that etches lines into the areas where the ground has been scratched away.

After the plate has been etched and the ground wiped away, the ink is applied and finds its way into the areas etched beneath the surface. The plate is wiped down again, then run through an etching press which applies pressure to transfer ink from plate to paper. The paper is hung to dry. Each additional color, if any, requires another run.

"I can isolate myself and get deeper and deeper, so I’ve got to maintain that healthy regimen of getting out and being exposed to art and artists."

One way he interacts with other artists is through exchange portfolios (a group of artists each sends a print to the person putting together the folio, they then send each artist a complete set of prints by each participating artist). When SDPB stopped by the studio, Kosten was printing an edition of twenty-five two-color prints for an exchange.

The print — inspired by something an adolescent Kosten glimpsed across the Lake of the Ozarks at summer camp — is a nice introduction to the hazily dreamlike quality of his work. Do you have some recollection of this place but you're not sure how? Dive a little deeper. 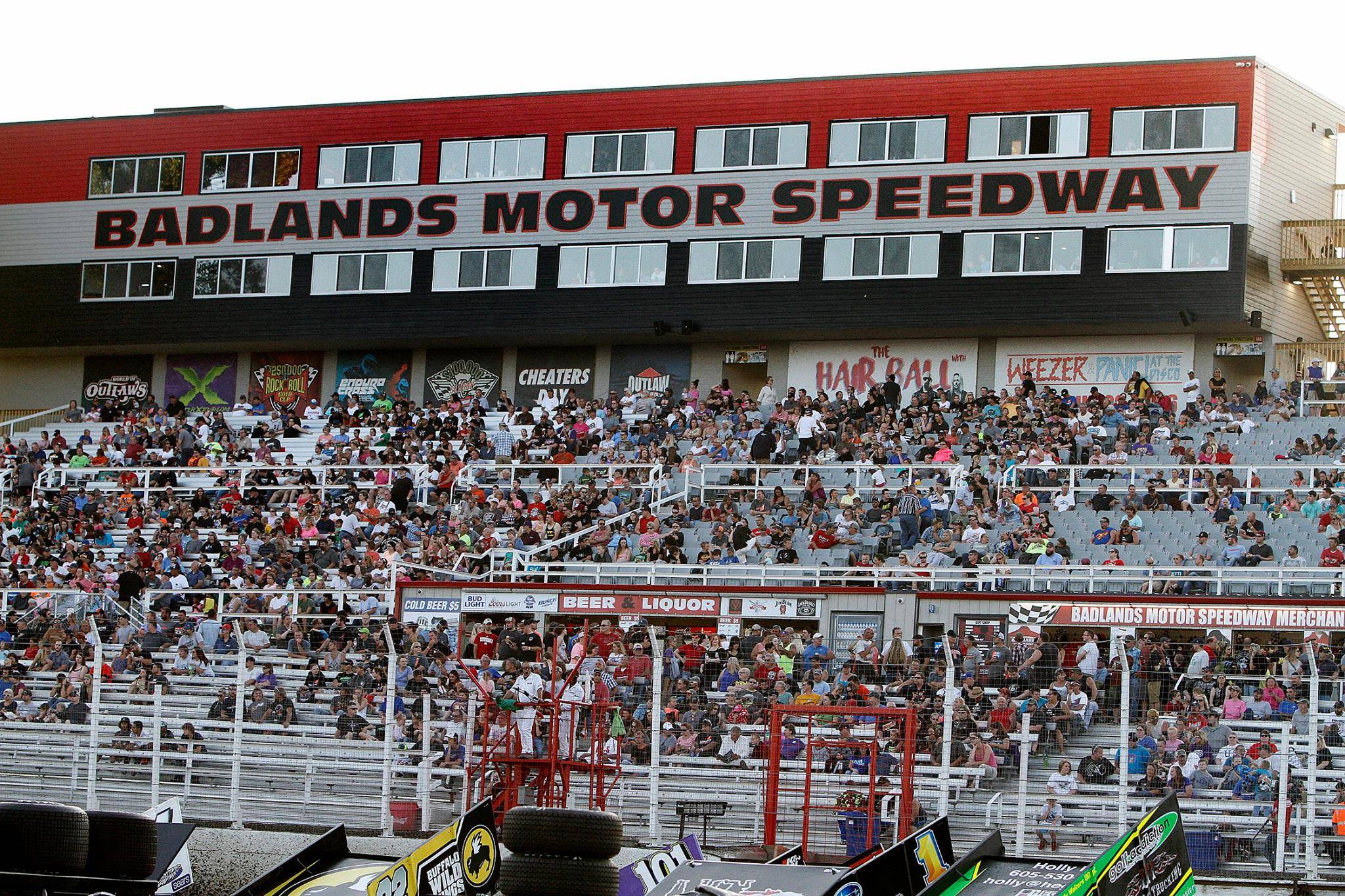 previous Post
Sports & Recreation
Badlands Motor Speedway In Brandon, South Dakota Is For Sale
by nate wek
•
next Post
Images of the Past
Yankton's Mead Building
by brian gevik
•
next Post 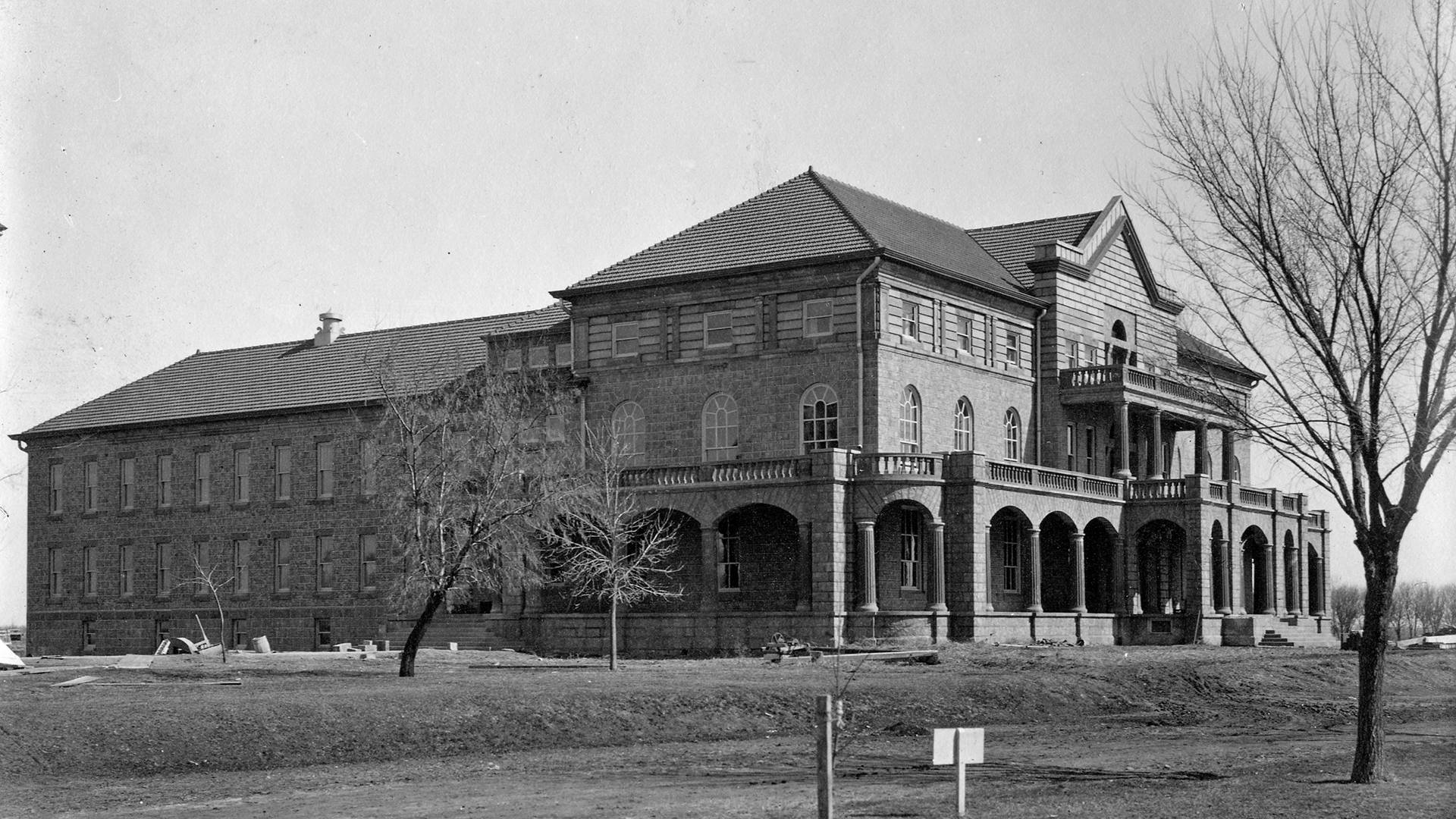