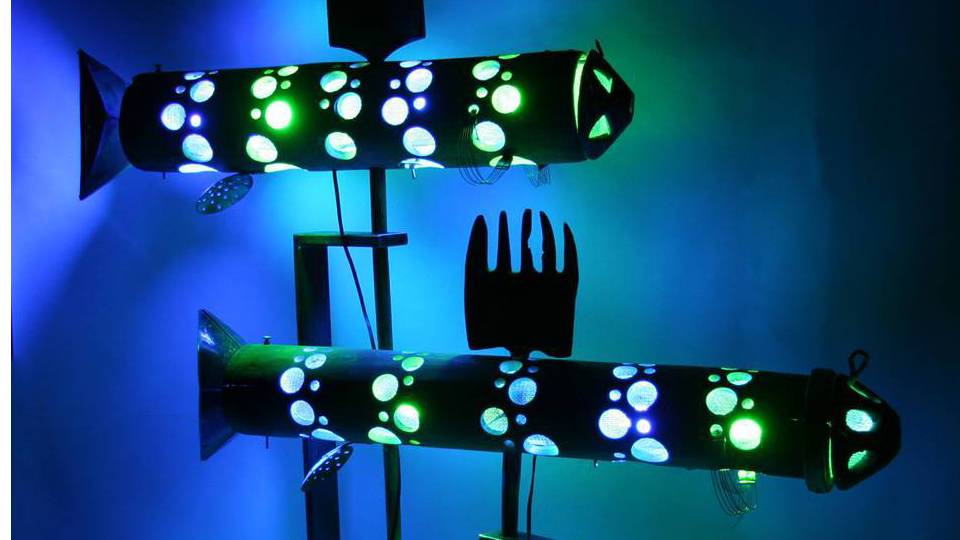 Ask Sioux Falls artist Steve Bormes what inspired him in the creation of his new large-scale art installation at the Washington Pavilion and he bounces around between stories about college ice fishing, the process of making Turkish yogurt churns and rehabbing garage sale-find swag lamps.

The Deep Sea Imaginarium is part art exhibit, part Jacque Cousteau underwater adventure and part Antiques Roadshow. In it, Steve has combined his love of found object art with fantastical representations of deep-sea fish. Walking into the exhibit is like descending in a deep-sea vehicle into the Marianas Trench. You don't know what might be around the corner; you don't know what the next fish might look like. Each is lit from within, staying in tune with the deep-sea fish Steve discovered while preparing for this exhibit.

"Right after I sent in my proposal (to the Washington Pavilion) to do these fish, I had knee replacement surgery. I had a few weeks where I just sat back and watched a lot of deep sea documentaries on Netflix," Steve explains. "The biggest thing I got out of that is that there are no rules. Some fish breathe through their skin, some fish have lungs, some have gills, some are phosphorescent. There's really no rules with fish because we haven't discovered them all yet."

Steve's artistic process follows no rules either, except to delight himself. He uses found objects for every piece he creates, ranging from old boat motors (a favored item) to grain augers and yes, Turkish yogurt churns.

"When I started going to Turkey to buy rugs (Steve's other job is owner of the Rug and Relic store in Sioux Falls with his wife, Tove), I kept seeing these hollowed out logs used for butter and yogurt churns and couldn't figure out how they did it. I had just come off my tree business (Steve was an arborist in Aberdeen for many years) and we had all the chainsaws and fancy equipment you could get, but there is just no way to hollow out a log like that, I just could not figure out how they did it," he laughs.

It turns out those logs are hollowed out by young Turkish boys, who take up to three days to hollow each four-foot log by hand, using chisels, hot coals and hammers. Steve couldn't resist the unique designs and took several home with him, resulting in some of his first artistic creations, what he calls "my Fred Flintstone swag lamps".

Those same logs are featured throughout the Imaginarium. They have become the core of all manner of underwater life forms. "I now bring home 50 to 75 logs at a time when I go over there," says Steve of his annual travels to Turkey. "I now use those as the base of many of my sculptures."

Steve sources many of his other sculptural elements as he road trips across the US as part of his rug business. "I stop at almost every antique store as I am traveling," he laughs. "It can be a long trip if you're going to travel with me!"

One of his favorite stops to make is for old boat motors. He explains that when he gets to a new town, he will make a call to the local boat marina in the phone book. He asks if they fix old boats and usually, if they don't, they know someone who does. Those referrals have led him to gold mines of old motors in dusty garages, where he sometimes brings home as many as 20-30 boat motor covers at a time.

"They become fish, they become cats, they become bison", Steve tells us. He has two boat motor sculptures in the 2016 Sculpture Walk in downtown Sioux Falls, one depicting a bison head (complete with horns made out of phonograph horns) and another with nine cat heads, each made of 1950's Johnson boat motor covers. "To me, they look like cats-I don't know how nobody saw that before. I think that when you look at these motors forevermore, it'll look like a cat to you after you see 'Nine Lives'."

Old boat motors feature heavily in the Deep Sea Imaginarium as well, with pieces like "Johnson Maximus", a large Johnson boat motor recreated as a deep-sea fish, complete with spatula fins. The front entrance of the exhibit is adorned with boat motor "fish" seeming to scurry along the bottom of a sea floor, all lit from within.

That internal lighting, intending to represent the phosphorescence of deep-sea fish, comes from the electrical skills Steve self-taught himself when he started rehabbing garage-sale swag lamps many years ago. He says that where he once had to run to the hardware store every time he starting wiring something, because he was never quite sure what he needed, now has a large part of his studio space devoted to electrical supplies and LED bulbs, sometimes buying them by the thousands.

And it is the thousands of beads of LED lights that make the Imaginarium the immersive experience that it is. Unlike most gallery exhibits where a ceiling light casts a glow from above for each piece, the Deep Sea Imaginarium is entirely lit from within each installation. A fully darkened gallery allows the visitor to drift from piece to piece, taking them in as if finding them in the water at the bottom of the ocean as part of a deep sea discovery mission.

It may seem a stretch for an art exhibit featuring deep sea fish to have been inspired, in part, by living in South Dakota but Steve claims it is his unique South Dakota life experiences that helped make his art come to life for him. To illustrate that point, Steve tells a story of ice fishing in college:

"Many of my college days were spent fishing on the Missouri River (Steve attended USD). We fished from shore, fished from boats and ice fished. After a few beers, in the middle of the night, ice fishing gets really fun. The ice is cracking, its kind of scary-you're in the middle of nowhere. And then in South Dakota, we have this fish we called the 'Eel Puppy" (American Eel)-it looks like a catfish and has a long eel tail. And once you pull that thing out of the ice, if you're not quick enough it will wrap itself around your arm in a hurry! That's one of those crazy-looking fish and it is in our reality here-I don't have to stretch it [my imagination] too far to get a fish like that on the wall."

He also says that his exhibit feels more like scuba diving in the Missouri than, say, Cancun. "It's dark down there (in the Missouri), you can only see three feet in front of you and it is pitch black beyond. You don't know what is around you, watching you, and a fish can enter your tiny field of vision and then disappear just as rapidly. It's strange and it's creepy and that is our underwater 'normal' here in South Dakota."

Steve also feels that living in South Dakota as an artist gives one perspective not found elsewhere.

"In South Dakota, we all leave here when we're young because 'it's not cool' or whatever and then eventually we find ourselves back here. I think that we are just really open when we travel; we're open to other places, cultures, experiences and art. Even though we're from this prairie, we're taking all these influences and bringing them back here and mixing it up whereas a lot of the country would completely skip South Dakota, especially as artists. And so they are not going to glean off as much from us as we do from them. And that twisted up mixture seems like it's working out."

Beyond his show at the Pavilion, Steve thinks that South Dakota has a lot to offer the greater art world and has a bright future ahead. He draws inspiration from the fast-growing art scenes in Sioux Falls and Rapid City and the state's investments and welcome of large-scale art installations such as Dale Lamphere's "Dignity" sculpture in Chamberlain.

"We have big ideas here, " he says. "I know so many people that are working hard and doing their thing and creating something new. I think South Dakota is truly going to become an arts destination."

One thing is for sure, Steve's new Deep Sea Imaginarium is certainly a destination for those who love art and who are down for their very own prairie version of a deep-sea adventure.

"Deep Sea Imaginarium" will be on display in the Everist Gallery of the Washington Pavilion Visual Arts Center from September 10, 2016 to January 29, 2017.You can find out more about Steve's work at www.stevebormes.com. 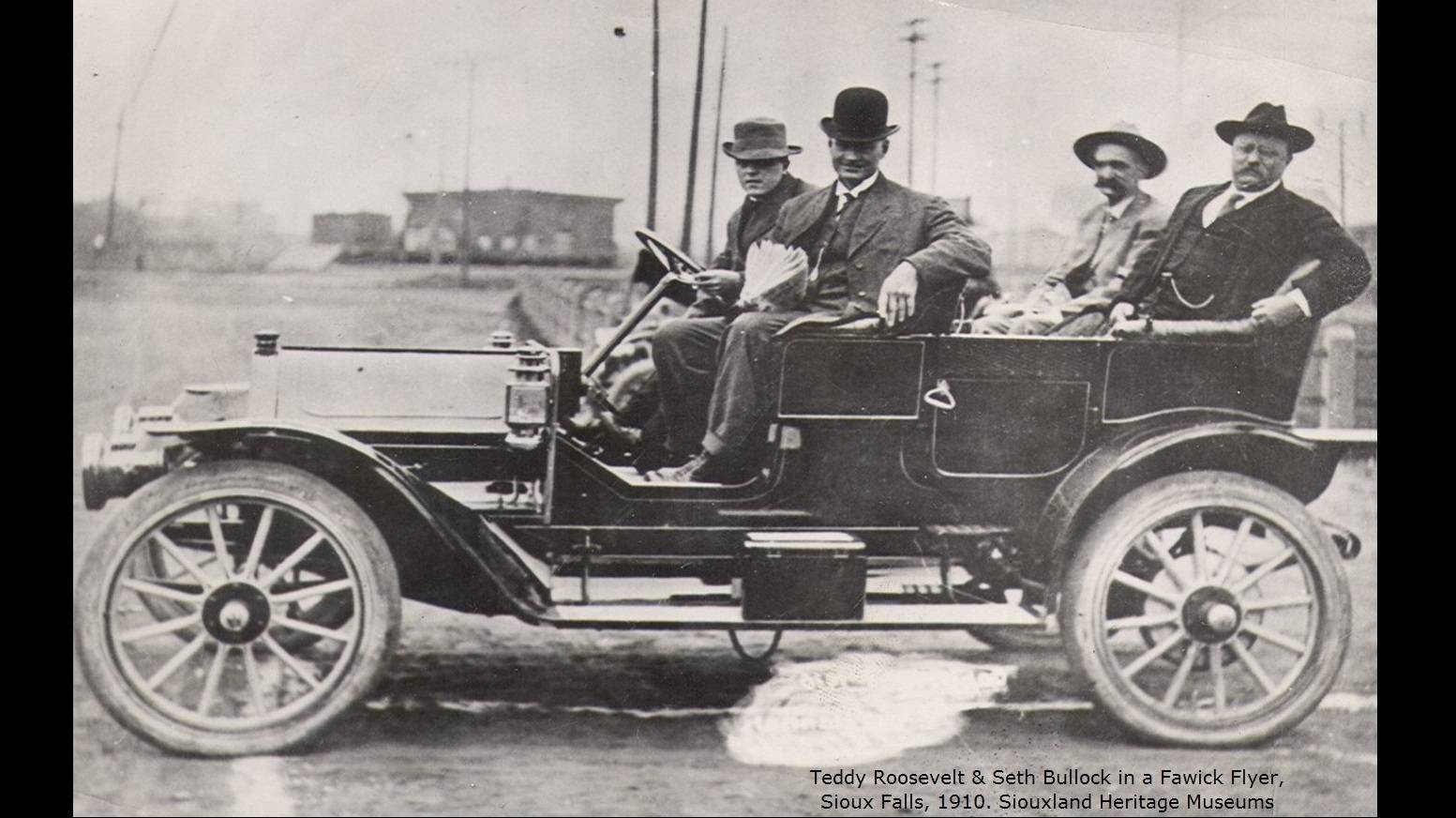 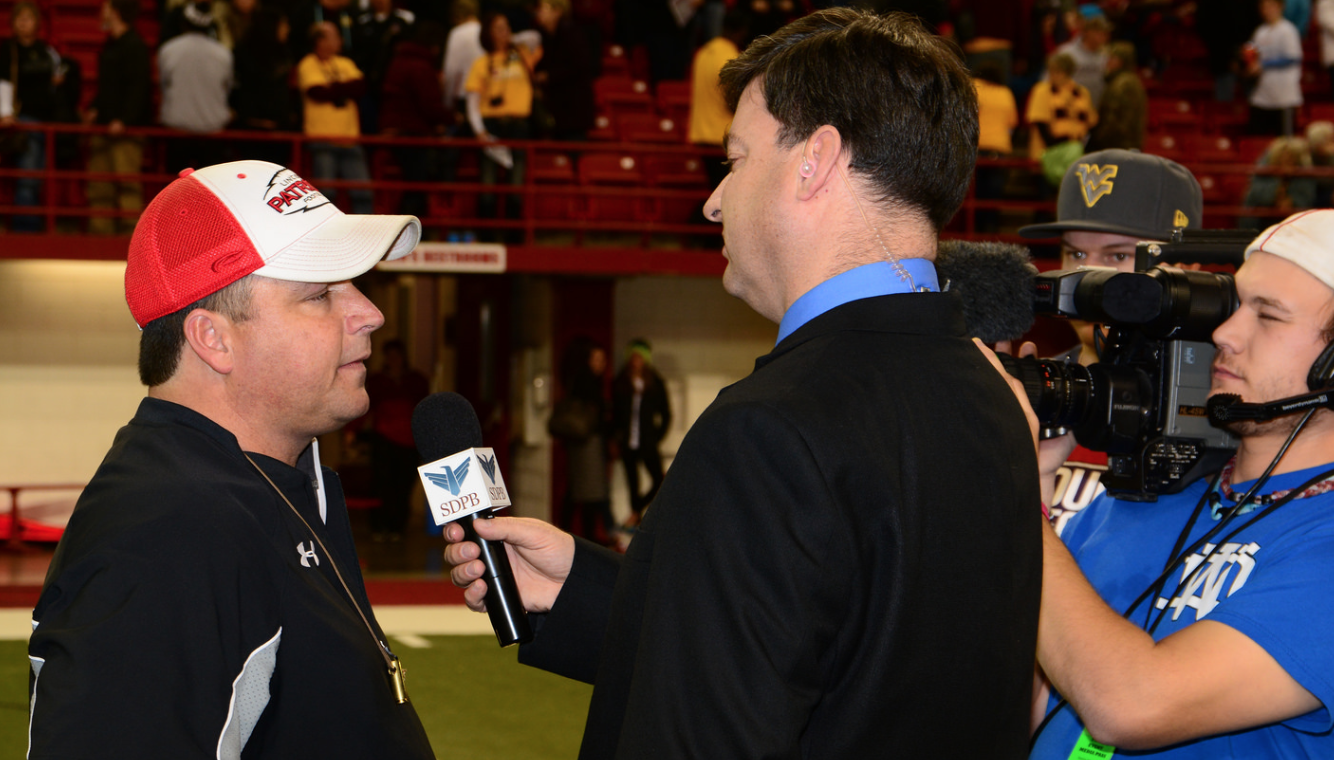