Landmarks : The Pickler Mansion in Faulkton

The Pickler Mansion, the historic home of Major John A. and Alice Pickler in Faulkton South Dakota, has been a Faulk County landmark for well over 130 years.

The record isn’t definitive on what year construction began — maybe 1882, maybe a couple years later. The “Pink Castle” began as a claim shanty and grew more grandiose in parallel with the Picklers’ prosperity. Over the years, additions budded and bloomed. By the 1890’s it had become a sprawling, eccentric Victorian mansion. Faulkton artist Charles T. Greener is credited with the signature pink that bursts against the big blue Faulk County sky.

Major Pickler served in the Iowa State Legislature before moving to the Dakota Territory. He was elected to the Territorial Legislature in 1884, and after the Dakotas were granted statehood, elected to Congress, where he served until 1897. The Pickler home housed many prominent guests in South Dakota, including Theodore Roosevelt, Susan B. Anthony and Grover Cleveland.

Alice and John Pickler were both pioneers in the women’s suffragist movement. Alice was a leader in the Women's Relief Corps of the G.A.R., Women's Christian Temperance Union (WCTU), and the South Dakota Equal Suffrage Association (ESA). (The WCTU had a very close, if sometimes contentious, working relationship with the ESA.)

John played a major role in introducing legislation to give South Dakota women the right to vote, first as a territorial legislator in 1885 (the bill failed), and then as a Congressman. He was derided by his opponents as “Petticoats Pickler” but the couple remained steadfast suffragists for life. Upon admission into the Union, the new state’s constitution required a referendum on an amendment to give women the vote. The suffragists lost the ballot in 1890 — it would take six more referendums, and 28 years, but in 1918 South Dakota women won the right to vote.

The Pickler Mansion was abandoned for nearly thirty years, beginning in 1955. Faulk County Historical Society President Jody Moritz says the role the Picklers played in the suffragist movement, and their association with Susan B. Anthony, is what initially lead the Historical society to investigate the house, which, despite being listed on the National Register of Historic Places in 1973, was lapsing into disrepair by the 1980’s.

The cataloguing of the Picklers’ correspondence soon turned into a larger project when the Historical society found a virtual time capsule inside the house. Much care has been taken to preserve the contents of the house as an authentic representation of the Picklers' times.

“All of the furniture is original to the home,” says Moritz, “… the pictures on the walls, the bedding, doilies, dishes… Only the working old crank phone is added, as well as some rugs.”

Restoration is still a work in progress, funded in part by summer tours. One-hour tours through all 20 rooms of the mansion are available daily from 1-4pm, Memorial Day through Labor Day. If you're ever in Faulk County, the Pickler Mansion is a truly unique place in a state known for them, combining a near-whimsical architectural genius with reams of national and South Dakota history, all wrapped up in pink. 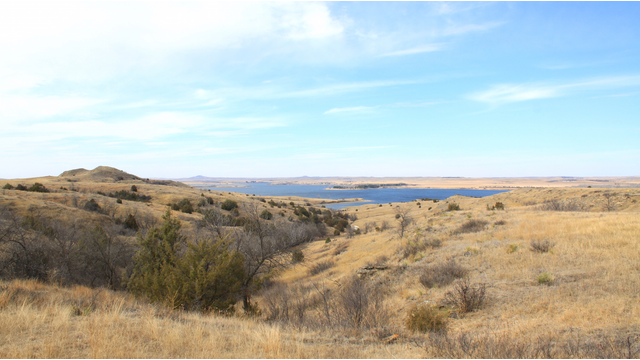