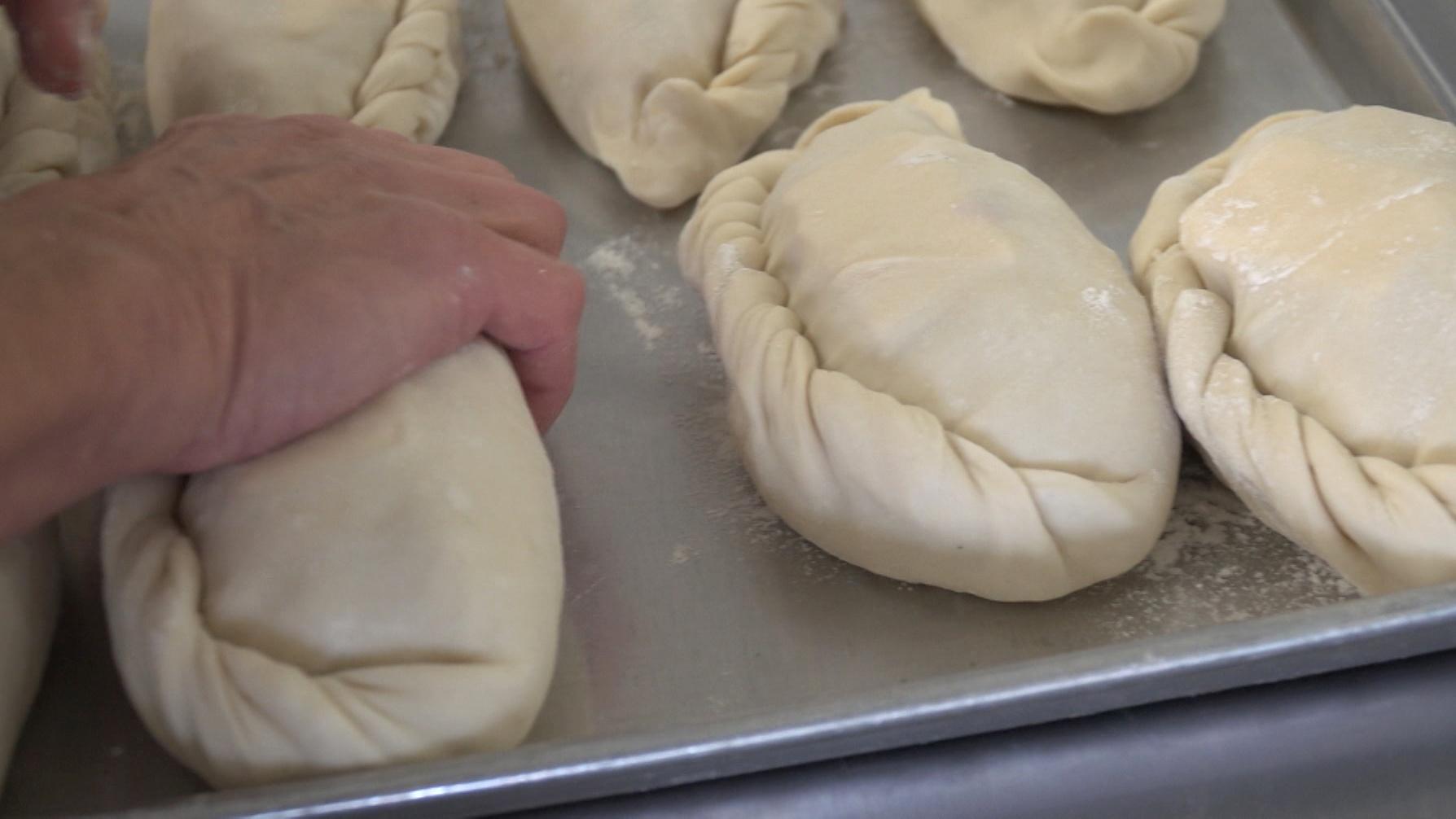 These pasties are ready to be baked.
Dakota Life

While producing our local food series, “Savor Dakota” a fellow producer just back from the Black Hills strongly suggested that I look into “King’s Pasties” of Lead. He thought them delicious. I am fond of the meat pie as well, they were a quick lunch to grab while I was a student in Northern England. The portable meal originates in the Cornwall region of the U.K.

Many consumers have heard of savory pies, I just didn’t know that they were popular in the northern Hills. While researching I found an article written by South Dakota Magazine. I was intrigued by the historical tie in to the mine.

King’s Pasties by Bonnie King has since changed hands. Michele Loken is Bonnie’s granddaughter, she now runs the business with her husband Oren. It's not the only place to fill a desire for the Cornish dish. A group from Christ Episcopal Church in Lead still get together a couple of times per year to make pasties for annual fundraisers and bazaars.

Residents and tourists alike crave the hearty pie. Ladies with Christ Episcopal Church have mused and researched the history of pasties for many years as they convene together for their preparation. Long time members of the community share their memories with women who have more recently joined.

Susan Medley, current President of Christ Church ECW (Episcopal Church Women) said, “ I am a relative newcomer to Christ Church, having joined in December 2007. I was confirmed in the Episcopal Church by Bishop Creighton Robertson in 2008. Shortly after that I helped make my first batch of pasties. Phyllis Lang, ECW President at the time, then told me, "Now you're Episcopalian!"

Evelyn Murdy gave a speech on pasties to a historical group earlier this year. The following information is the presentation that she shared. Murdy kindly passed her knowledge along to South Dakota Public Broadcasting.

A pasty (as in the word ‘past’) is a kind of meat pie developed to provide a substantial meal for miners who worked below ground, and who could not stop work to purchase more perishable meals.

Those who are unfamiliar with this type of pastry sometimes mispronounce the word in a way that makes it sound like paste. A ‘pastie’ [PASTE-e] is an item employed by exotic dancers in lieu of clothing, and is a far cry from the hearty meal enjoyed by the Welsh miners.

Those who have watched the Poldark series on Public TV have seen the primitive conditions in the numerous tin mines that dotted the landscape of Cornwall. The hard working miners needed strength to sustain them through their grueling hand labor with pick and shovel far underground. To satisfy that need someone, and it must have been a woman, invented a way to solve the problem. It was the pasty!

There were no grocery stores from which to purchase the necessary ingredients, so she worked with what was at hand. Every woman baked her own bread and based on that fact a serviceable dough was created. It was simple. She added flour to her mixing bowl and worked into it the lard that was rendered from the slaughtered pigs her family raised. A little water and a dash of salt was added. There was no real recipe necessary because the dough was mixed by hand and by feel. The quantity of ingredients depended on the number of pasties to be made. The dough was worked vigorously.

Before the crust was finished, the filling was prepared. It consisted of meat, usually beef, turnips or rutabaga, potatoes and onions, plants grown in household gardens. Meat was cut into bite-sized portions, as were the other garden products. The ingredients were mixed to satisfy her husband’s taste. When the housewife was ready, she cut the dough into suitable portions and rolled out a crust in the shape of a pie plate. Adding dollops of butter lard, or even a little pork to the filling, she heaped the mixture onto half of her dough. The meat and vegetables were now covered with the other half of the dough. She then sealed the pasty by dipping her finger into water and wetting the edge. When she crimped the pasty shut, it was sealed, except for a small vent cut in the top.

The pasty was now placed in the oven to bake. As the meat and vegetables cooked, they formed juices, a kind of gravy that enriched the tasty interior ingredients, tenderized the meat and created a healthy, hearty meal. The crust provided a form of bread. A self-contained whole meal in itself, the pasty was carried into the mine in a lunch bucket and was ready to be eaten.

It is said that some miners carried their pasties in their jacket pockets, but this sounds like a culinary disaster to me. I have also heard that miners occasionally scraped their shovels clean to hold the pasty and then warmed it over their lantern candle. This process would at least offer a warm meal. Pasties have now become the traditional dish of Cornwall and the unique symbol of a Cornish woman’s ingenuity. Cornish pasties came to Lead with unemployed “Cousin Jacks” seeking work in the Homestake mine. Their wives provided them with the same wholesome sustenance they had known in Cornwall. But this tasty dish refused to stay underground. Pasties are now relished by thousands of persons who have never seen the interior of a deep mine. The pasty has spread widely throughout America and nourishes those of many nationalities who enjoy this delicious repast.