A History of the Flandreau Indian School

by
Bill Ellingson - Moody County Historical Society and Museum
• Published on September 10, 2021 • Last modified on November 15, 2021
Images of the Past

MISSON SCHOOL ORIGINS
The Flandreau Indian School (FIS) is one of four remaining off reservation boarding schools for Native American students in the United States funded and operated by the Bureau of Indian Education. Its origins go back to late 1871 or early 1872 when classroom instruction was first provided to Native American children in a Presbyterian mission school. Classes were held in a church building and meeting house then known as River Bend Meeting House. It was built on the high south bank of the Big Sioux River by Indian families who were the first “settlers” to take up homesteads in the Flandreau area beginning in 1869. It was located on the corner of present-day Flandreau City streets of Crescent and Prospect.

GOVERNMENT DAY SCHOOL ESTABLISHED
In 1873 a new church was built by the Flandreau colonists to accommodate the increasing number of Native American families who migrated to the area. It was located on a hill about one mile northeast of the River Bend Meeting House and named First Presbyterian Church. It is still in use today and is the oldest continuously operated church in South Dakota. Later that year, the federal government purchased the meeting house and appropriated money to purchase desks, books, a school bell, and supplies. By that time, some children of white settlers and residents of the town of Flandreau also attended. It continued to be operated as a mission school until 1877 when the federal government took over and conducted it as a government day school until 1892-1893.

Perhaps the most notable alumnus of that mission school attended it in 1873-74. He later became one or the highest educated Indians of his time and through his social work, writings, and public speeches, he was among the best known and respected American Indians of the early twentieth century. Dr. Charles Eastman started his classroom education in Flandreau as a teenager and went on to earn a B.S. degree from Dartmouth and an M.D. degree from Boston University. Learn more about Dr. Charles Eastman.

PETTIGREW’S POLITICAL PROMISE
By 1877 Congress had established policy of developing boarding schools for Native Americans not living on reservations. For a number of years prior to 1889, Indian families and others in the area discussed and encouraged the establishment of a federal boarding school for Indian students in Flandreau. Other residents of nearby Indian reservations also supported the proposal. Richard Franklin Pettigrew (a prominent Sioux Falls lawyer and politician), seeing an opportunity to gain favor among voters in Moody County, made a campaign promise to do just that in 1889. That year, Congress carved two states out of Dakota Territory with South Dakota being one of them. That created new political opportunities and campaigns which, unsurprisingly, generated political promises.

When South Dakota gained statehood, one of the first orders of business was to elect two senators to represent it in Washington. R.F. Pettigrew obtained his party’s nomination to run for one of them. During his campaign that fall he promised the Flandreau area voters that, if he carried their vote, he would get a federal Indian boarding school located there. He won the election and, having carried Moody County, proceeded during 1890 to set the stage for Congress to appropriate money for purchase of up to 169 acres of land, and thereafter in 1891, to begin construction of the first buildings for a new boarding school.

By early 1892 the first buildings of the new Flandreau Industrial Indian School (as it was first called) were completed and located across the Big Sioux River approximately one-half mile north of the original meeting house. At first it was a boarding school only for Native American grade school age children. In 1892, the initial campus was made up of three buildings: a classroom building, boys’ dormitory, and a building that housed girls on the upper floor, and a dining hall, offices, and classrooms on the main floor. After Alfred Riggs died in 1893, it was called the Riggs Institute for a number of years. Riggs had served the Santee Sioux Indians as a missionary for many years. The boarding school has gone through a number of name changes thereafter but, since 1964, it has been referred to as the Flandreau Indian School. 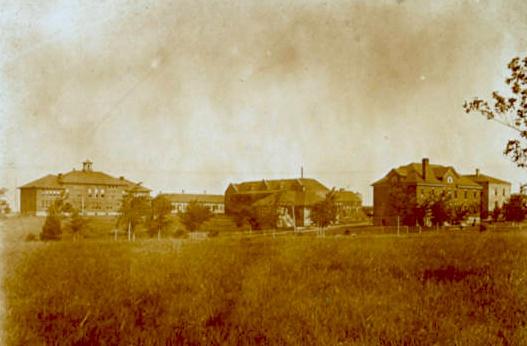 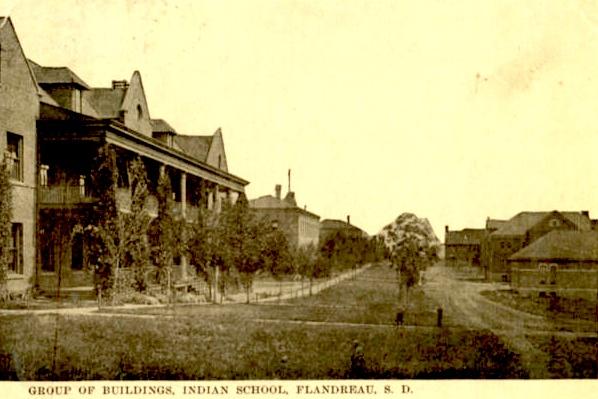 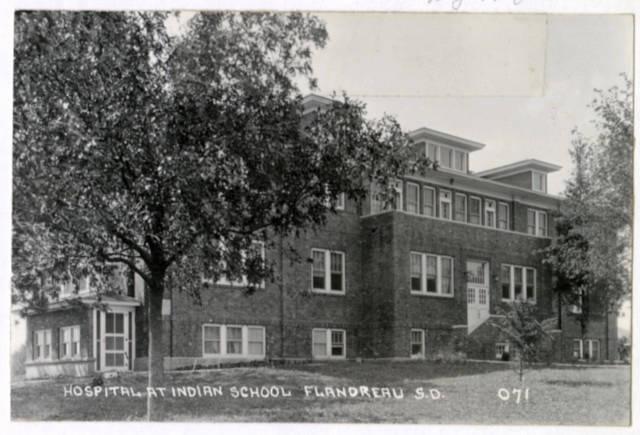 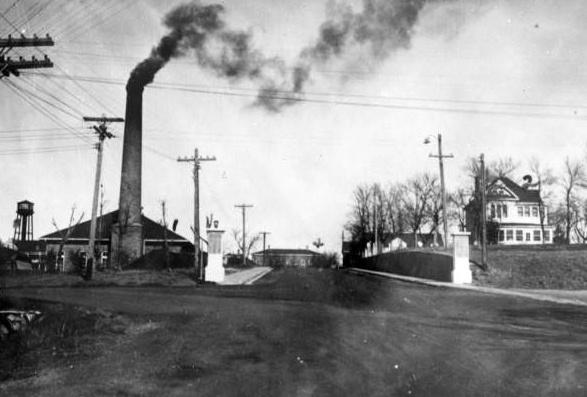 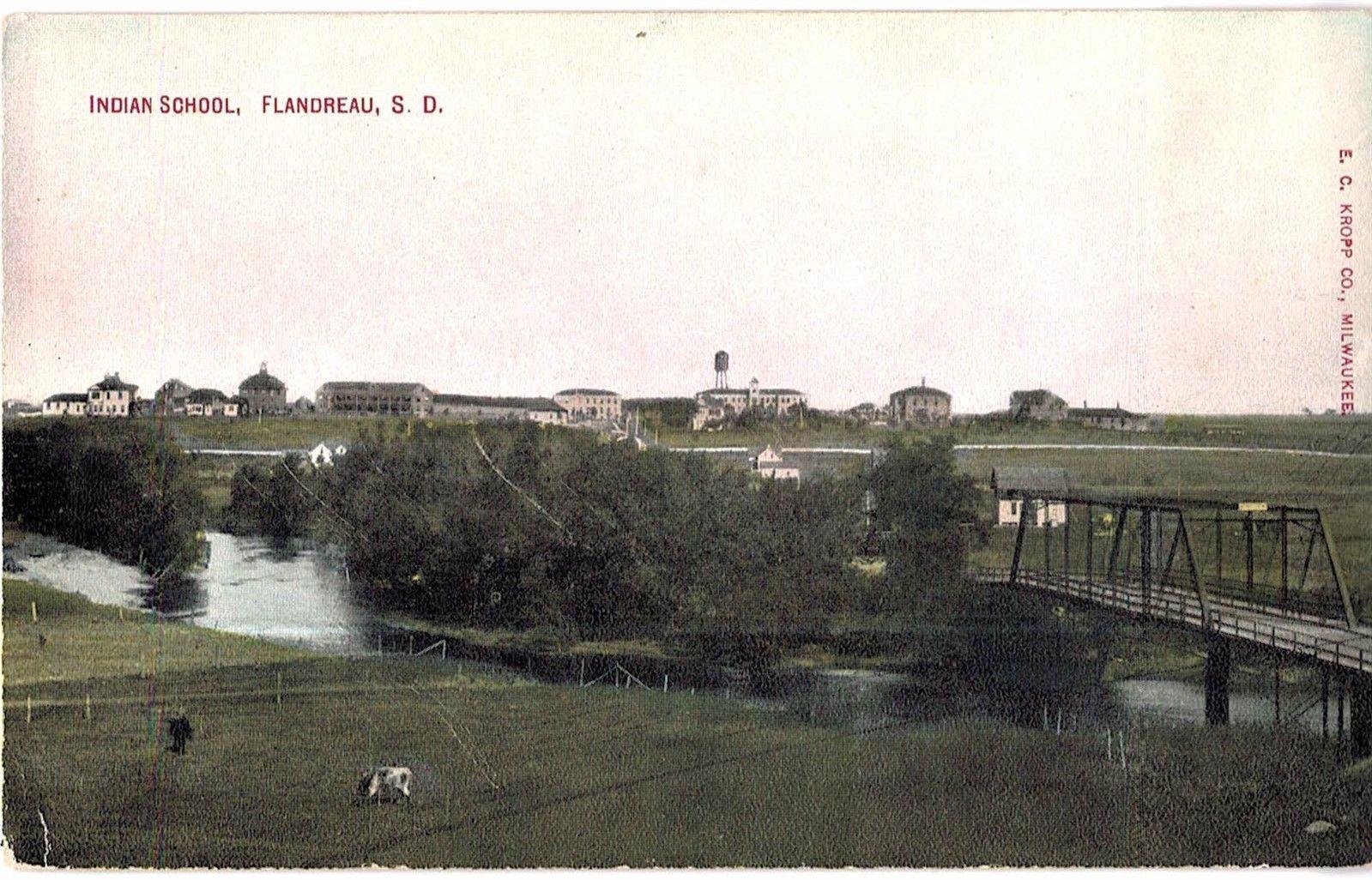 The boarding school opened in 1893 with four buildings, twelve staff members, and a total of ninety-eight pupils. After that the campus expanded rapidly. By 1939, it grew to encompass several buildings, about fifty teachers plus other supervisory and maintenance employees, and an enrollment peak of 563 students with a housing capacity of 500. During the first few years it was a struggle to enroll enough student to fill to capacity but, by 1897, 226 pupils were enrolled with room only for 170. From time-to-time Congress would appropriate money to expand the capacity, but expansion of the physical plant and staff typically lagged behind the demand through he first half of the 1900s thereby causing many student applications to be turned down annually. From the peak enrollment in 1939, the number of students on campus fluctuated from numbers in the 400s to sometimes over 500. Over the decade preceding 1970 it averaged around 500. Students at that time came primarily from ten contiguous states and more than thirty tribes.

After 1970, enrollment started declining and sometimes varied quite a bit from year to year. Much uncertainty as to the possible closure of the school surfaced from time to time as federal Indian policy was reviewed and revised. Many off reservation boarding schools were closed starting as early as 1940 and continued through the 40s and 50s. One example is the boarding school that was started in 1893 in Pipestone, Minnesota for grades school age children. It was closed in 1953.

Efforts to close the school at Flandreau were made periodically, most recently in 1982, but all have been successfully repelled. Residents of the local community, along with tribes and alumni from all over the country, were vocal in their support of continuing the school at Flandreau. The uncertainty of its future, however, no doubt had an adverse effect on enrollment. It seems to have stabilized in recent years since enrollment has remained on average at about 320 students since 2009 through 2018.

For the first couple of decades, (1893-1918), instruction at the new boarding school was offered only for grades one through eight. Even kindergarten classes were available until 1901. Because of small enrollment throughout the early years, the younger grades were gradually eliminated. However, in 1913 grades nine and ten were added, which coincided with development of a two-year agricultural course for those pupils who wished to continue their schooling and training. Later, over the next ten years, two more years were added, which then allowed for a total of four years of agricultural instruction. By 1931, grades one through eight were dropped, academic course offerings were expanded, and the school became an accredited four-year high school (which it continues to be.)

Policy for Indian education at the time was “to make the people less dependent on the federal government.” The proposed route most tried was through vocational training in agriculture, manual trades, and domestic tasks. Consequently, the boarding schools typically taught farming methods, trades, and domestic activities.

By 1934, FIS courses for girls offered by the home economics department included commercial sewing, laundering, and cooking. Other departments offered Native arts, library work, bookbinding, and home nursing. By 1936, cosmetology was added and eventually accredited by the state, enabling those successfully completing the coursework to be licensed. Academic courses were expanded and others added in the curriculum through the first half of the twentieth century, but Home Making I, II, and III, and other courses in home management continued to be required of all girls. Those courses covered foods, general health and nutrition, childcare and training, clothing selection and care, construction, budgeting, and consumer buying.

For the boys at FIS, early on and until about 1920, tailoring was offered. From 1901 until 1936, shoe repair and harness-making instruction was provided. Starting in about 1924, a manual arts department was up and running with courses in carpentry, woodworking, and mechanical drawing. By 1934 courses were offered in baking, auto mechanics, barbering, leatherwork, metal working, painting, electricity, masonry, and plumbing. Students were used for much of the campus’ needs for building construction, maintenance, and repair.

The school started out with 160 acres of land purchased in 1892. It added 320 acres in 1898 to expand its agricultural production, and then reduced it by selling off about 400 acres by the late 1950s. In 1955, President Eisenhower ordered that any commercial activity carried on by boarding schools “to provide a service or product for its own use if such product or service can be procured from private enterprise…” be terminated. Consequently, FIS got out of the farming business shortly thereafter. Prior to that, for many decades agricultural related trades had top priority at FIS and other Indian boarding schools. Instruction and practical experience were offered in crop farming, gardening, dairying, as well as hog and poultry production. Boys enrolled for agricultural training spent half of their training in actual farm practice and, by 1934, about six hundred acres of and was used by the agricultural department. Crop production included corn, oats, wheat, potatoes, and vegetables. Animal production included primarily hogs and dairy. Hogs raised were butchered and cows produced a record of on hundred pounds of milk daily by 1934, much of which was consumed on campus. Any surplus of the farm production was sold to help cover operating expenses.

Although vocational instruction was curtailed in the late 50s and early 60s, it has since resurfaced as a valuable part of the curriculum. In addition, currently Native studies, college prep courses in cooperation with South Dakota State University, athletics, Junior ROTC, industrial arts, and the fine arts are offered. The academic department requires students to take mathematics, English, science, social studies, government, and history courses. As would be expected, tribal government and Native American history are included. 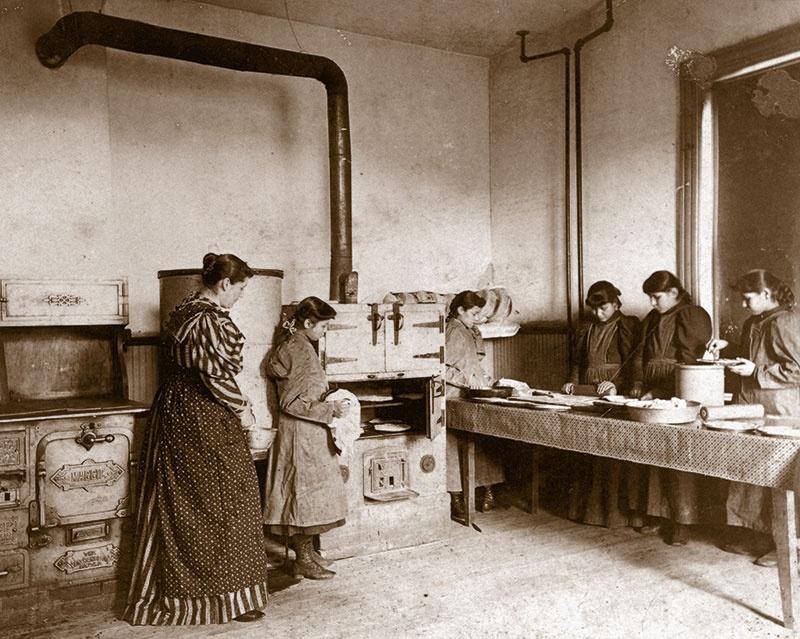 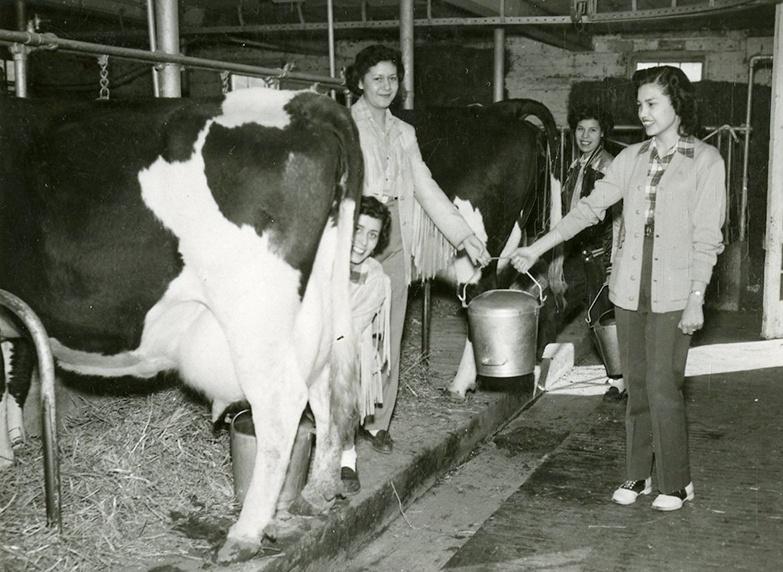 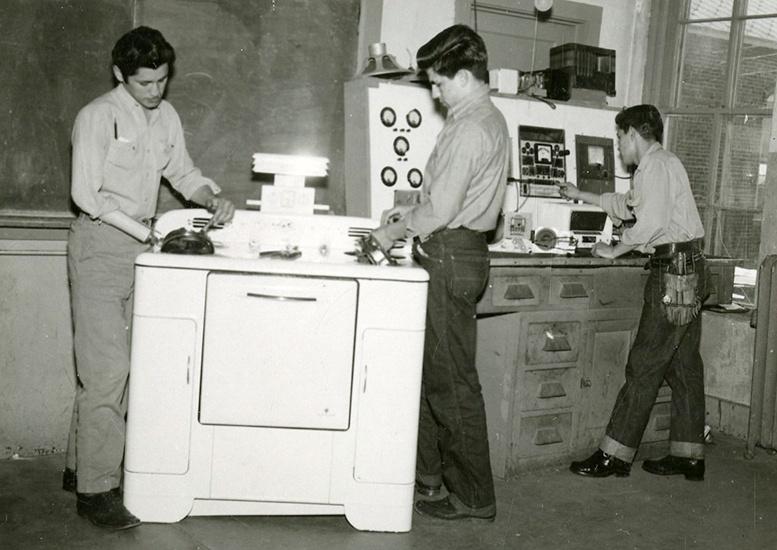 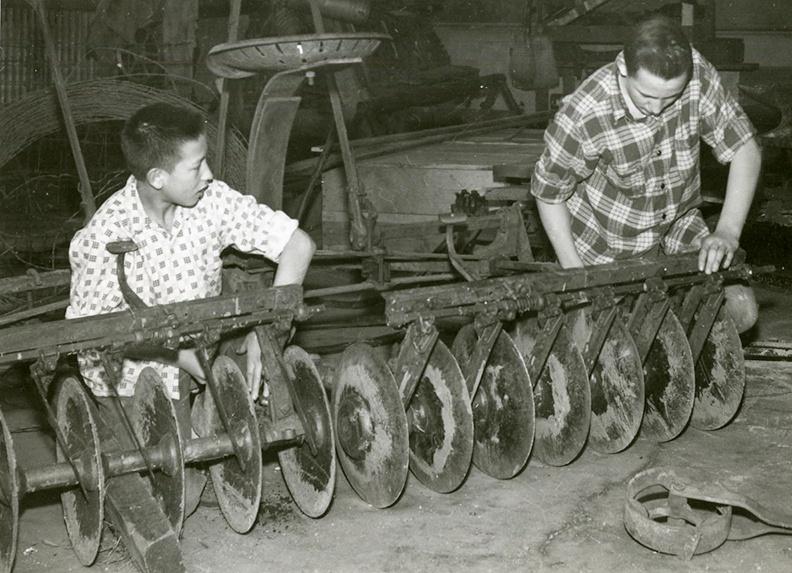 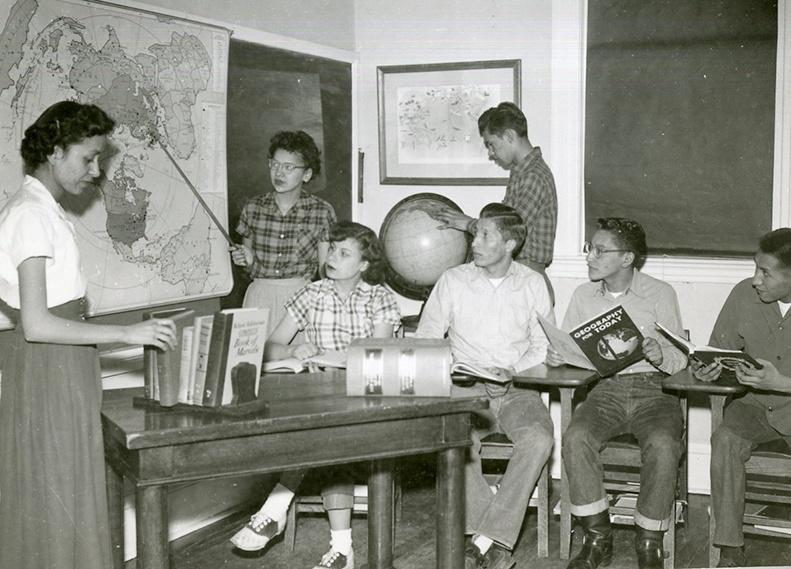 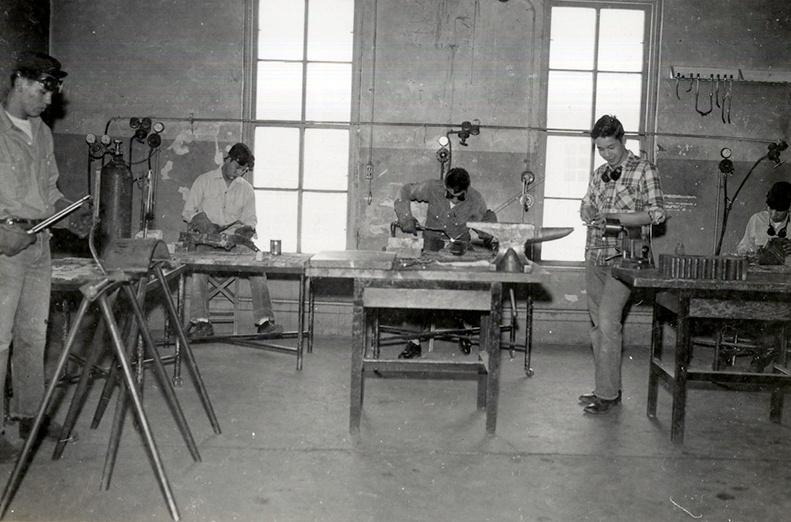 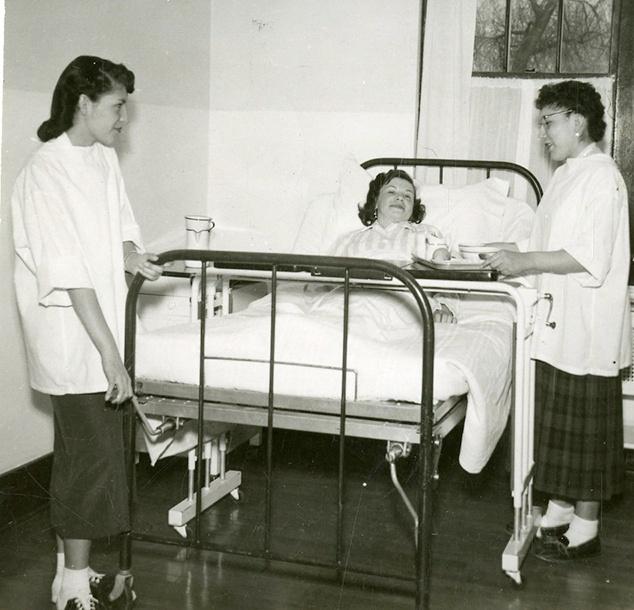 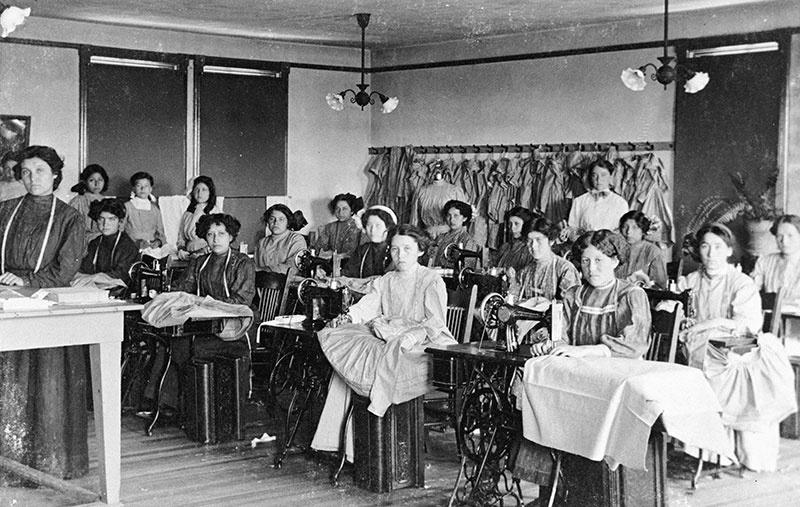 As of today, the Flandreau Indian School campus consists of thirteen buildings plus fiver residential quarters. There are eighty-five staff members in the following departments: thirty academics including sixteen teachers, a principal, counselors, clerk, secretary, and others; twenty-five home living staff; six in administration; six in food service and eighteen in facilities management.