by
Pat Roseland - Minnilusa Historical Association
• Published on January 21, 2020
Images of the Past

In downtown Rapid City, South Dakota, you can see giant creatures on a ridge of sandstone at the top of a hill. It’s one of the area’s original tourist attractions – Dinosaur Park. So how did those dinos get there?

The park was conceived by many people, including members of the Rapid City Chamber of Commerce and C. C. O’Harra, the president of the South Dakota School of Mines and Technology at the time.

There were to be five dinosaurs constructed – Apatosaurus, Triceratops, Stegosaurus, Trachodon and Tyrannosaurus Rex. And the man chosen to build them was Emmet Sullivan, born on May 27, 1887.

It has been said that Emmet was associated with Gutzon Borglum, a sculptor best known for creating Mount Rushmore National Memorial. In the book, “Christ of the Ozarks,” Emmet said he cooperated in the artistic formation of the Mount Rushmore faces, but there is no record of such work. However, he did practice law in North Dakota and Rapid City in the 1930s.

Emmet was creating small sculptures in Rapid City when the idea of the park was being tossed around. The government, more specifically, the public works agency called Works Progress Administration (WPA), got wind of Emmet’s work. When they asked if he could do large sculptures of dinosaurs, his response was, “Of course I can.”

The land that the sculptures were to be constructed on was donated to Rapid City. Towering 300 feet over the city, the site had a commanding view of the Black Hills to the west and the Badlands to the east.

Construction began in March 1936, and Emmet was given 15 months and $25,000 to complete the project. He devised his own system of construction, setting 2 inches of black pipe in cement for the framework. He then covered them with steel mesh and more concrete.

Once built, it took three months to paint the reptiles. Dinosaur Park was dedicated on June 1, 1937. When the park was completed, it was said that it could hardly be replicated anywhere within a city’s boundaries in the United States.

Emmet and his wife Lorraine were granted full control over Dinosaur Park’s concessions, to be maintained by them for public use. The city took control in 1967, but Lorraine continued to run the concession area.

In 1958, Emmet built models of two more dinos: a Dimetrodon and a Protoceratops - the only dinosaur that did not roam the Black Hills area.

Toward the end of the project, there was controversy between the WPA and Emmet. He resigned but kept the Tyrannosaurus’ teeth, saying he made them on his own time. When they later saw eye to eye, he placed the teeth in their rightful place – the dinosaur’s mouth. At the ripe old age of 83, the T-Rex is toothless again.

A project record with the names of supporters, WPA employees, members of the Rapid City Chamber of Commerce and other city officials were enclosed in a sealed packet and placed inside of the thigh of the huge Apatosaurus. Those names are expected to remain there until exposed by the elements in the distant future.

Emmet passed away on Nov. 3, 1970 and is buried at Black Hills National Cemetery.

In 1990, Dinosaur Park was placed on the National Register of Historic Places.

The dinosaurs have been keeping a watchful eye over Rapid City for nearly 83 years, and they have the best view available. 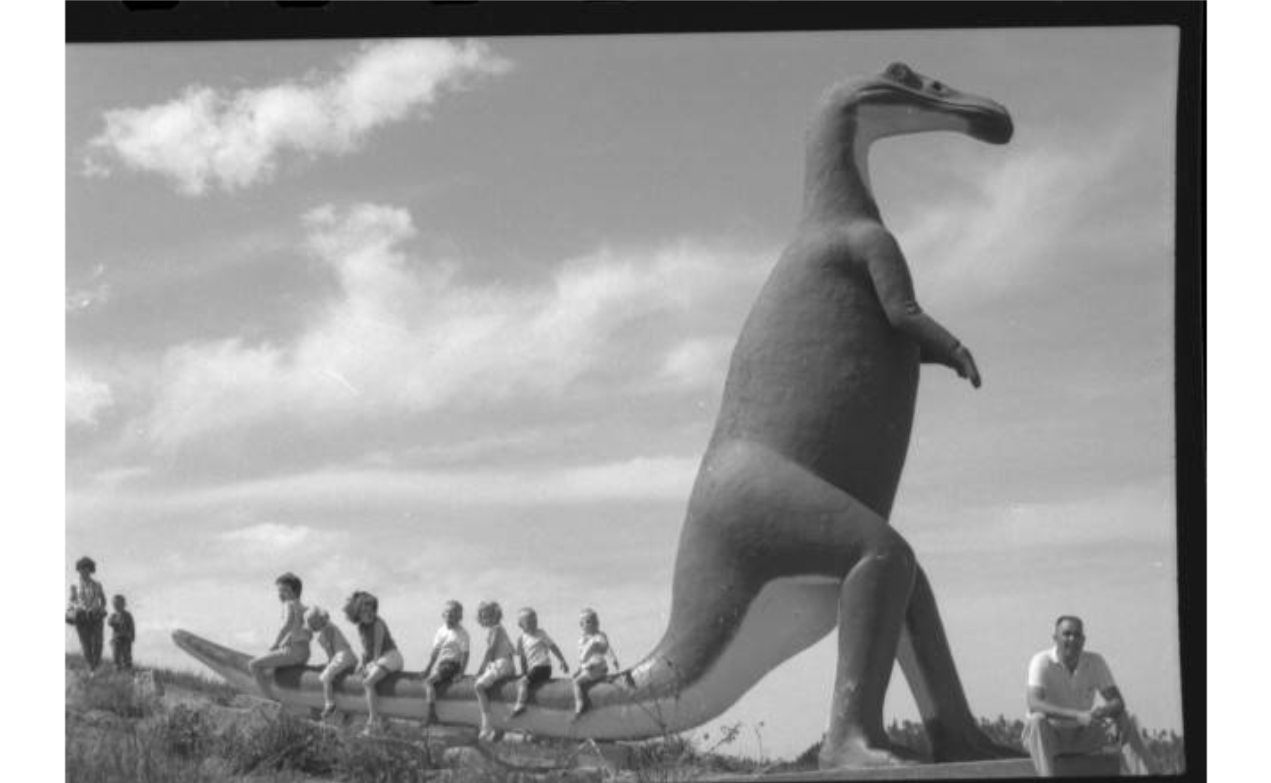 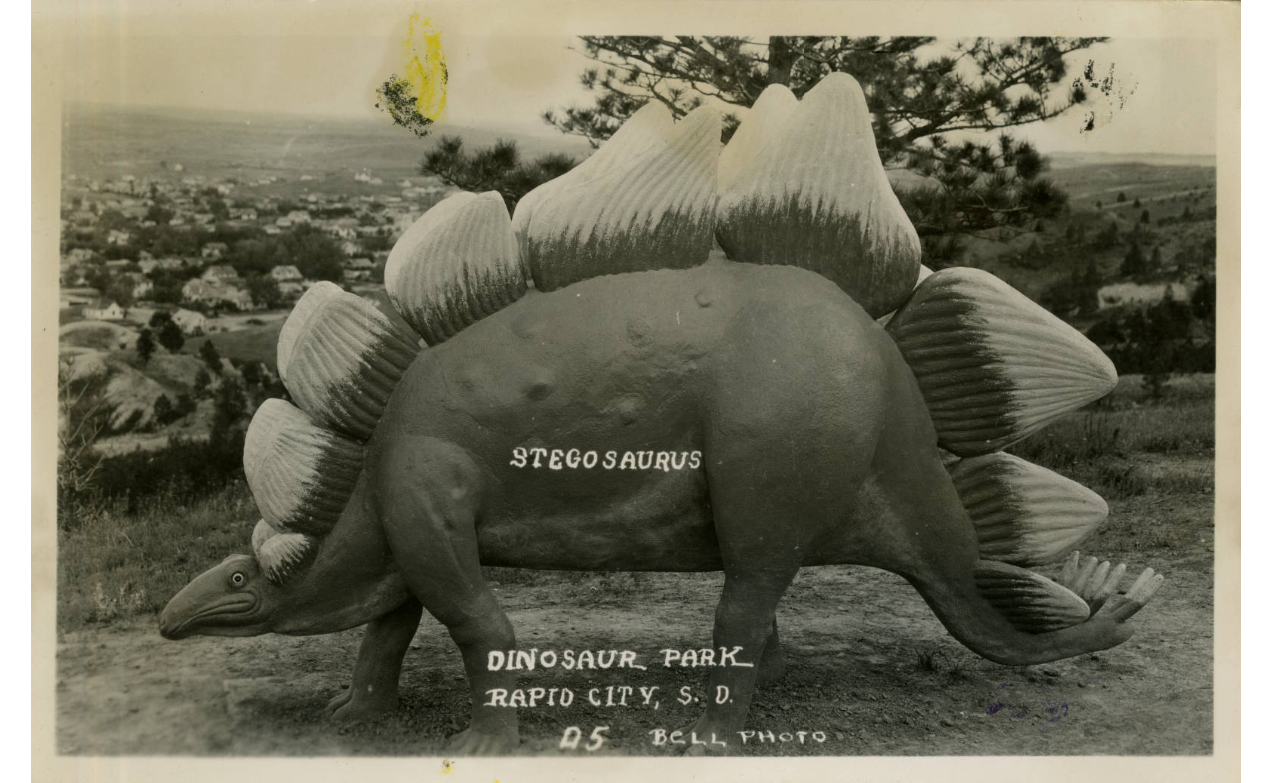 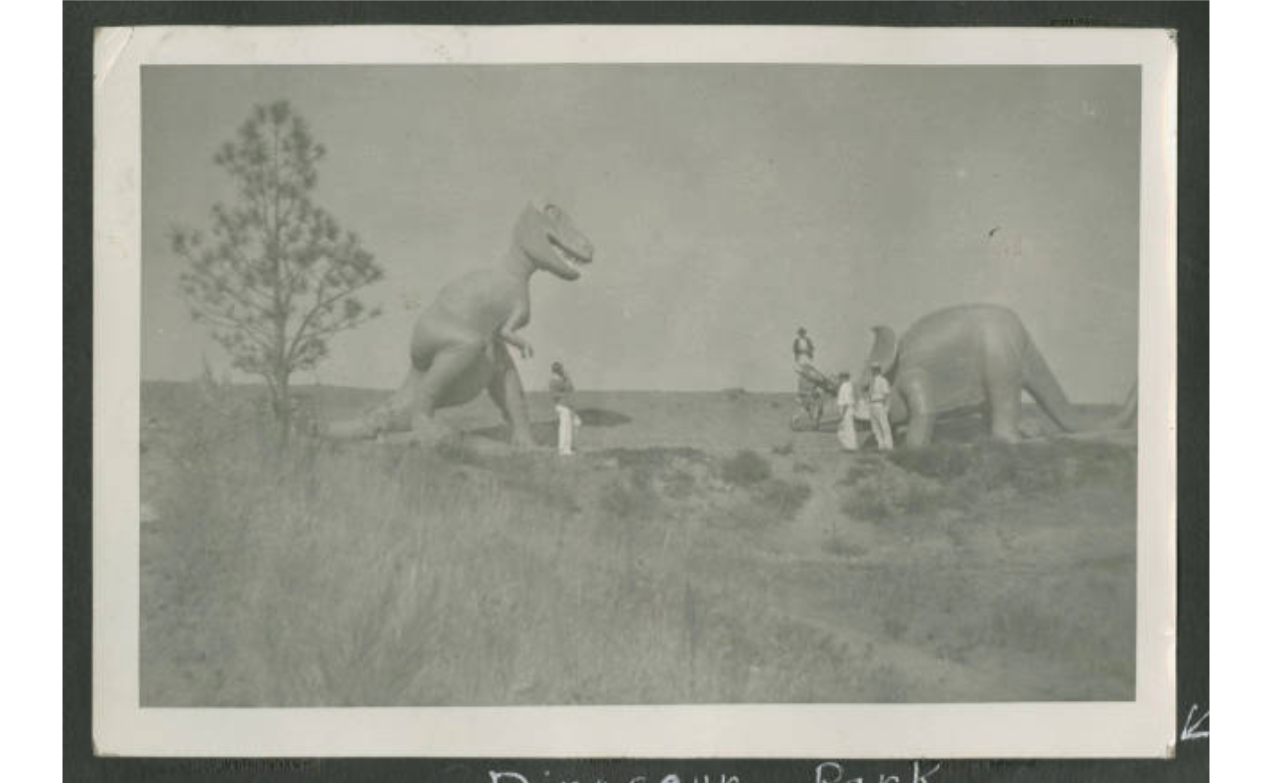 6 / 15
T. Rex with Apatosaurus in background 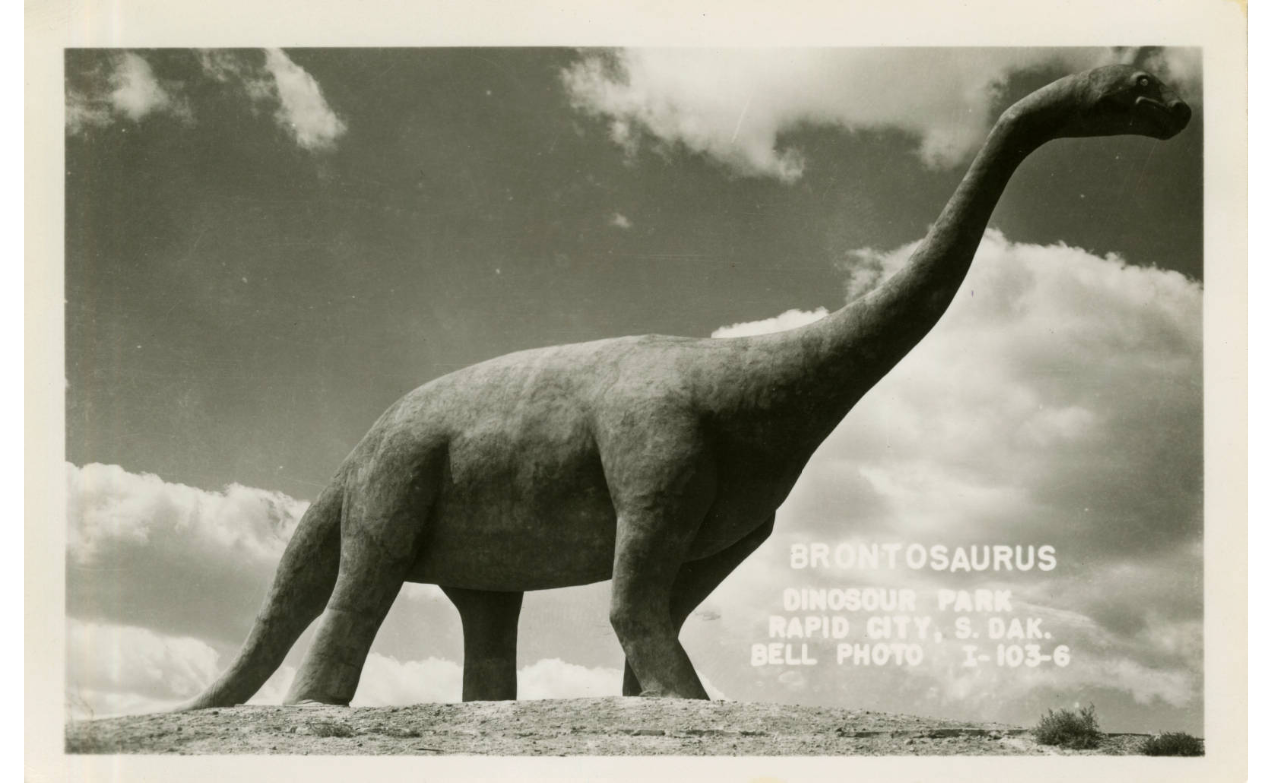 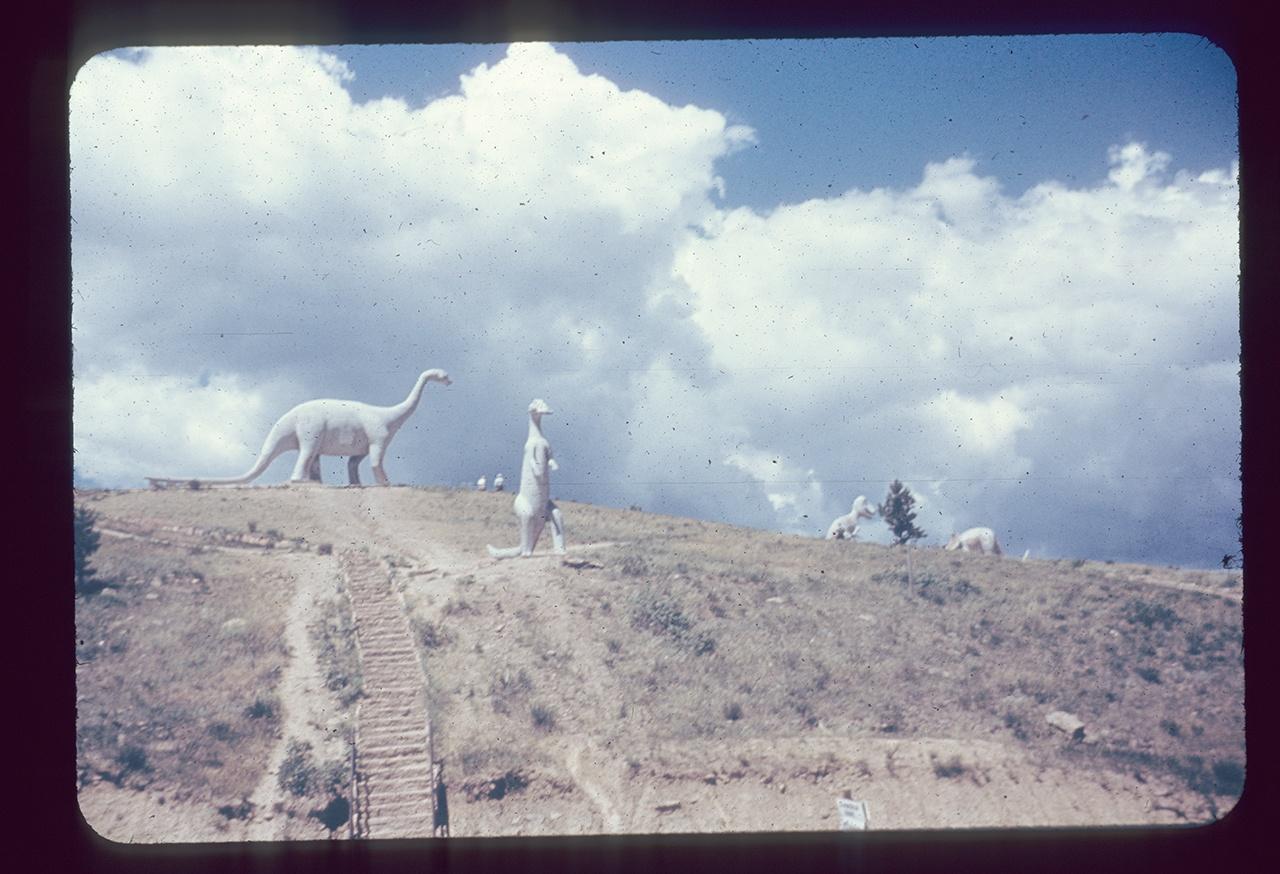 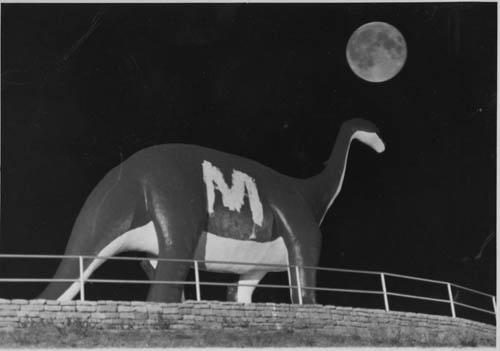 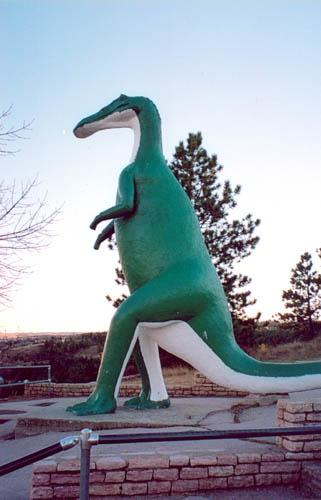 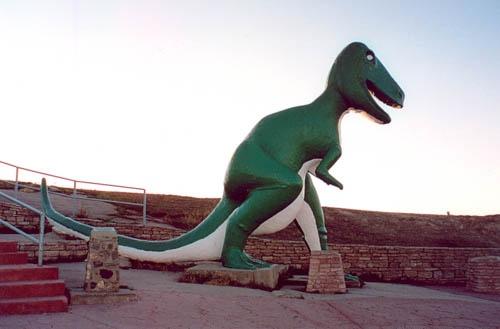 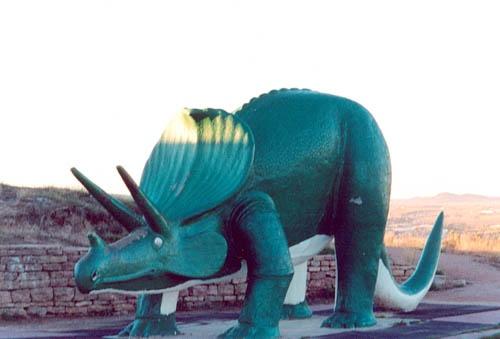 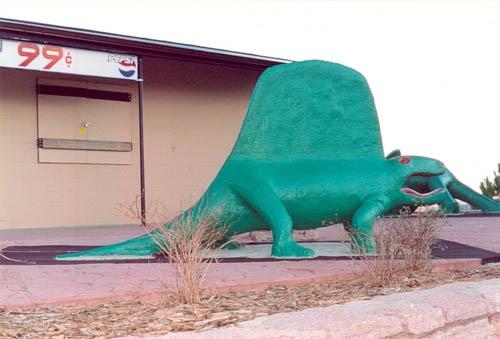 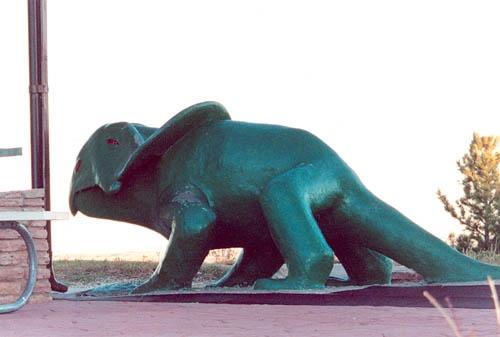 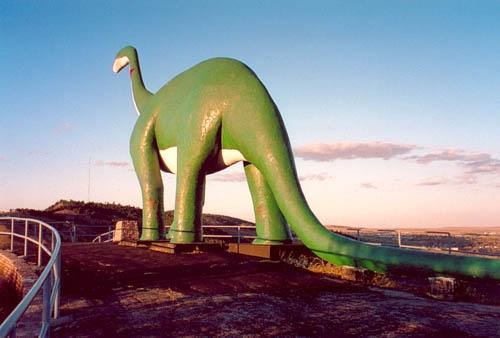