Charting the autumn colors, finding the magic in Spearfish Canyon

“It has really invigorated the trees and has slowed down the color saturation so that it’s only at about 90 percent today,” Boyer said. “And that’s after already reaching 85 percent last week.” 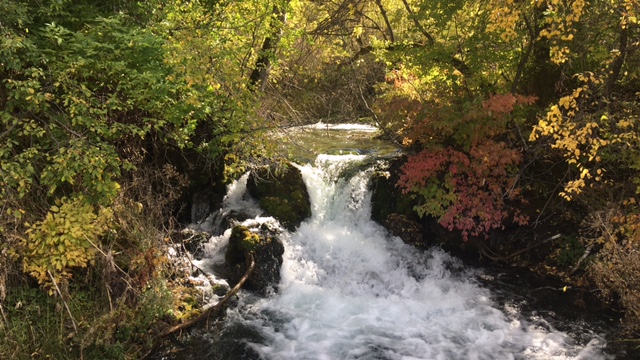 What does all that mean? Colors, lots of them, now bursting, as Boyer likes to say, in the forest and across meadows, up and down the cliffs and throughout the tangles of creekside fauna bordering the curvaceous 19-mile-stretch of U.S. Highway 14A that makes up the Spearfish Canyon Scenic Byway.

Boyer is the unofficial keeper of the Spearfish Canyon color-saturation count each autumn in Spearfish Canyon. He notifies news media outlets by email of the percentage of saturation, starting with a scattering of lime greens and building week by week into the full outbreak of multi-colored autumn extravagance.

Tuesdays and Fridays are his survey days. And I caught up with him yesterday at Bridal Veil Falls after he and his wife, Carol Koerner, a Eureka native, made the cruise up the canyon from Spearfish to have lunch at Cheyenne Crossing and cruise back down again.

Which means, Boyer likes to remind us, that safety at the wheel is an imperative for canyon cruisers, in a stunningly beautiful place that is never more of a driver distraction than at this time of year.

That’s important because deer and other wildlife are common along the road, especially early and late in the day, and also because the caravans of cars and trucks and ATVs blend with motorcyclists, bikers and hikers.

Boyer estimates that more than 100,000 people from South Dakota and other states will cruise the canyon to gawk at colors this fall.

“Sioux Falls is big,” Boyer says. “We really get a lot of people coming out from Sioux Falls.” 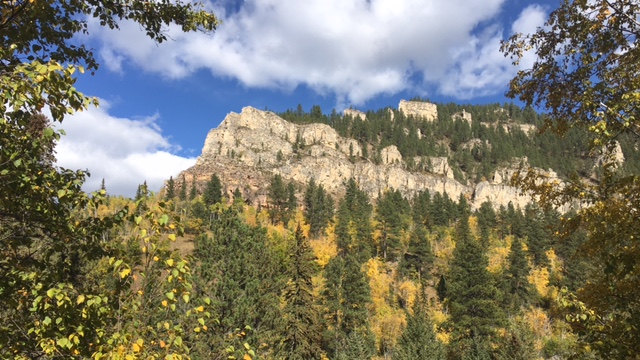 Wherever you’re from, you can find that something magical Boyer mentioned.

But this last weekend wasn’t the first time Boyer was enchanted by the spellbinding qualities of the canyon. It happened initially more than 40 years ago, when he was a big-shot lobbyist for the aeronautics industry.

“I’d lived and worked in that urban world, Chicago and New York and D.C.,” he said. “And you know, they talk about the skylines there. But it was the skyline here that lured me to this place.”

Boyer’s dad kept a cabin up the canyon beyond Savoy. And Boyer came there for breaks from the urban rush. It was during one of those breaks that he decided this was where he wanted to live.

“I got a call from my boss, telling me I had to get back and handle something,” Boyer said. “And as I was talking to him, I was looking out the window at a doe and  fawn in the creek, getting a drink. I looked at the phone and looked at the doe and fawn and looked back at the phone, and that was when I decided.”

But he also stayed busy, owning a five-state marketing firm and an FM radio station in Spearfish, which he sold after suffering a heart attack. He then worked as president of the Spearfish Canyon Foundation for 14 years.

Now 74, the Wisconsin native is president of the Spearfish Canyon Society. An advocate for and student of the canyon, he has been charting autumn colors in the there since 1994. Most of that charting has been between Boyer and a small group of email recipients, including reporters. But that changed a bit this year, after a story by the Black Hills Pioneer.

“I let them use my email address in the story, and I’ve been going batty ever since,” Boyer said. “I’ve had over 100 emails, and it just keeps growing and growing.”

So does the color saturation, by the way, although that magical touch from the rain has slowed things down.

Prior to the wet stuff, Boyer was anticipating a quicker-than-usual peak for the color show. Dry conditions and unusually warm weather had things moving ahead of schedule. But now he’s expecting 100 percent saturation to be delayed a few more days.

“If the winds don’t blow and the leaves hold, it could be Friday or into the weekend,” he said. “Which would be just about average.”

It would also be a fine time to cruise the canyon with a careful eye on the colors and close watch on the road. Follow the speed limit, which is 35 mph or less in many areas, and don’t hesitate to stop on gravel or asphalt turnouts to admire the view, and let more anxious drivers go by. 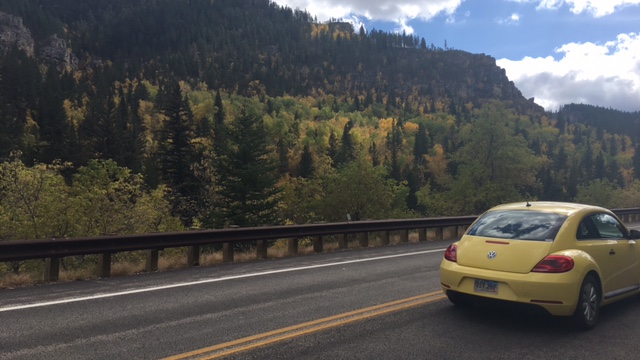 There is more than leaves to see, as Boyer pointed out in his email update on the color saturation yesterday. Knowledgeable on the rock formations and stream flows and plant types, he tends to blend the poetic and the scientific in describing what he sees — and what we should take time to appreciate.

“The scenic canyon drive follows the meandering bluish-green rapids of Spearfish Creek while the entire scene is framed in a deep emerald green pine and spruce forest.”

Boyer splits the canyon up into four interconnected ecosystems:

There is what he calls the northern great plains grasslands at lower elevations near the canyon mouth, where the high walls of red limestone contrast with the “rich gold and orange colors of the oak and cottonwoods, the yellows of the prairie grasses, and reds of the sumac.” 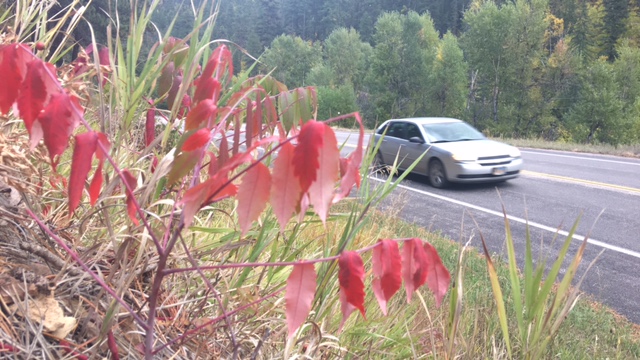 Then there’s the Rocky Mountain coniferous forest near Bridal Veil Falls, with the high walls of yellow sandstone highlighting the “towering dark emerald-green of the ponderosa pine, purples of the dogwood, and reds of the nannyberry.”

From Victoria up, the eastern deciduous forest “displays the tan-gray limestone high walls with the vivid golden and orange aspen and birch, yellows of the ferns, and reds of the ivy.”

And above Savoy to Cheyenne Crossing, the northern coniferous forest features “the green shale and tan limestone high walls with the vibrant dark-emerald white spruce, golden willows and oranges of the hawthorn.”

The forecast, by the way, is for lovely fall weather this week, before some wind and possibly rain arrives for the weekend. So you might get to experience something magical in the canyon, without three days of rain. 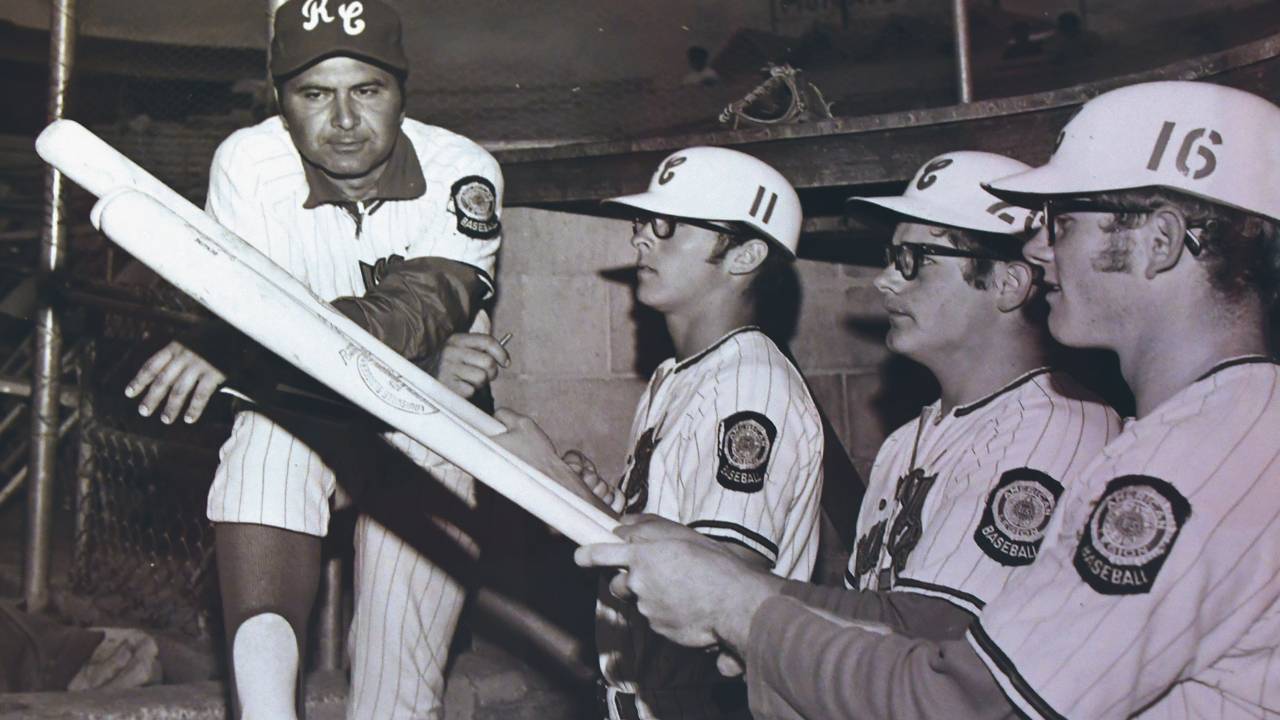 previous Post
Sports and Recreation
Dynasty on the Diamond: Post 22 Baseball
by katy beem
•
next Post
Images of the Past
Sioux Falls and the Birth of the Modern Hot Air Balloon
by brian gevik
•
next Post 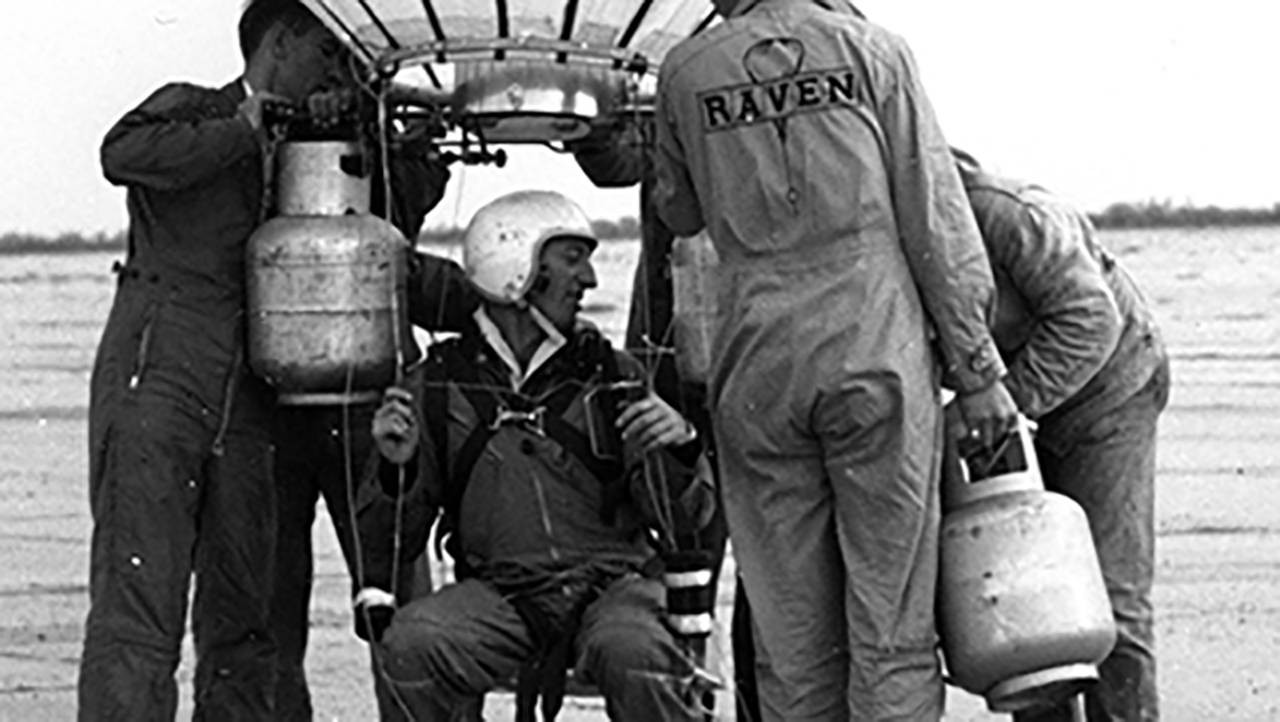