Jean Rounds is the real difference-maker in 2020 U.S. Senate race 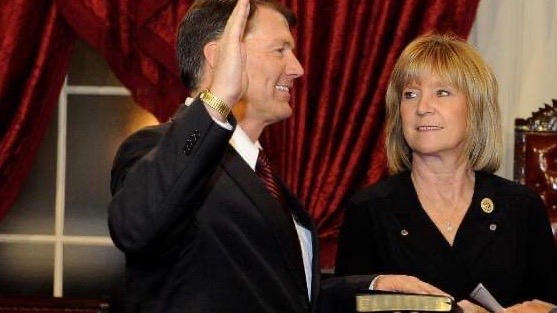 There’s nothing more important to the 2020 U.S. Senate race here in South Dakota than Jean Rounds.

Jean Rounds and her health.

They’re as much at the center of strategic planning for Sen. Mike Rounds and his not-quite-defined campaign team as fundraising and platform development.

But let’s stop here before we consider political possibilities and theories and rumors and ponder something more important: Jean Rounds, and her health.

Her health is her life. And her life is the priceless center of a family, including her husband, the former governor and first-term U.S. senator, their children and grandchildren.

It’s bigger than politics, of course. A lot bigger. Which is why I have hesitated to write about the single most determinative factor in whether Mike Rounds runs for reelection: his wife’s health.

The aggressive malignant tumor detected near her sciatic nerve in June has been shrinking in promising ways since Jean Rounds began her treatment at the Mayo Clinic in Rochester, Minn. Word from the Rounds team last week was that the good news continues.

So good news has followed bad, elevating the mood of the Rounds family and, in a world of less significant realities, the chances that Mike Rounds will run for a second U.S. Senate term.

A run in which he would be the pronounced favorite.

That presumes there won’t be any surprising reversals in the cancer treatment and management for Jean Rounds. And of course, such things are always possible, although places like Mayo do an amazing job to reduce such possibilities.

And in today’s world of cancer treatment, particularly when top-flight institutions like Mayo are involved, years are the most common prognosis. How many years does Jean Rounds have? Who knows? How many do any of us have? But I’ve had friends who faced dire short-term prognoses who went on to live for five, six, seven years, and more. Sometimes a lot more.

I have a sister who found herself near death from colon cancer and its treatment five or six years ago. And today she is alive and well and living each day fully in-between life-affirming annual test results that all of the Wosters and extended kin celebrate.

Like my friends, my sister lived as normally as possible while fighting cancer. She continues to live it that way now. And I expect Jean Rounds to do the same thing. From what I know of her, I couldn’t imagine otherwise.

Nor can I imagine that she would want her husband of 41 years to give up his political life and such an important job in order to hover around the house, watching over her. He can be a U.S. senator and still be at home regularly, as regularly as in many less-prominent jobs requiring travel away from home.

They have a large family, a great home along the river in Pierre, a circle of faithful friends, an energized faith life. It’s not like Jean Rounds sits alone looking out the window and wondering: “Where’s Mike?”

In fact, Mike Rounds’ political life seems to have fit in pretty well with their family life since he announced on Nov. 28, 2012 that he was leaving the private insurance-real estate business once again to run for the U.S. Senate seat then held by Democrat Tim Johnson.

A three-term Senate incumbent with physical impairments left from a near-fatal brain bleed in December of 2006, Johnson was a profile in courage during his campaign for a third term in 2008 and his service during the six-year term that followed. But he decided not to run for a fourth term.

And after some discouragement from other leaders in the state GOP, then-U.S. Rep. Kristi Noem decided not to take on Rounds in the primary. Then Rounds won a GOP primary and the general election with relative ease.

Since taking office in January of 2015, he has followed the South Dakota congressional tradition set by Sen. John Thune ten years earlier of living in the state and coming back every weekend, as well as for weeks at a time during breaks from Senate action.

There was no indication that setup wasn’t working before Jean Rounds learned she had cancer. I assume it can still work, and likely will.

If and when Mike Rounds would be needed by his wife at the Mayo Clinic in Rochester, Minn., he could probably get there more easily from D.C. than he could from Pierre.

As full-time political jobs go, being a U.S. senator is relatively family friendly, with elections only ever six years and the opportunity to take breaks if personal needs intervene. Rounds has worked in the last five months to balance his personal and professional obligations. I couldn’t have been easy, but he seems to have done it pretty well.

In truth, if he were to win a second Senate term, Mike Rounds could be absent from the Senate for days and weeks at a time, showing up in D.C. for key votes and hearings, then being in Fort Pierre or over in Rochester if Jean needed him there. And who would hold that against him? Certainly not his Republican colleagues in the Senate. And almost certainly not his Democratic colleagues, either.

Would state voters? I doubt it. Not most of us. And if we did, we could show it in the 2026 election. By then, Mike Rounds would be in his early 70s and would face an interesting choice between running for another six-year Senate term or spending more time at home and in the pheasant fields of family land in Lyman County.

That would be then. This is now. And every indication is that Rounds wants another term and is supported in that fully by his wife.

There are plenty of other theories. One has it that Rounds will delay and delay and finally resign from office or, presuming he wins another term, resign then, thus allowing Republican Gov. Kristi Noem to appoint Congressman Dusty Johnson as his successor in the Senate, at least until the next election. Then the plan, according to the guy who shared the theory with me, would be for Noem to appoint Sioux Falls Mayor Paul Tenhaken to fill Johnson’s spot in the House.

There’s a couple of problems with that. 1) Vacancies in the U.S. House are filled through a special election, not through gubernatorial appointment. 2) I expect Rounds to serve out the term, rather than engage in GOP trickery with an early retirement. Oh, and 3) I expect him to run again.

Also, I wonder if anybody told Tenhaken about the plan?

The fact that Rounds hasn’t officially announced a run for reelection in 2020 fires all kinds of speculation. But the family has had a lot on its plate over the last six months. I’m not surprised the campaign schedule and a final decision and announcement have been shifted a bit. I’d expect something official by the end of the year.

Meanwhile, I’m sure there is plenty to discuss in the Rounds household, whenever Mike is home from his job in D.C. And a lot of that “plenty” has nothing to do with politics or campaign planning.

It’s about kids and grandkids, old friends and new, about a woman’s health and her precious place at the center of a family.

You know, the kind of real-life stuff that can make politics seem kind of insignificant.