The Cement Ridge story: Watching for lightning, finding the flames 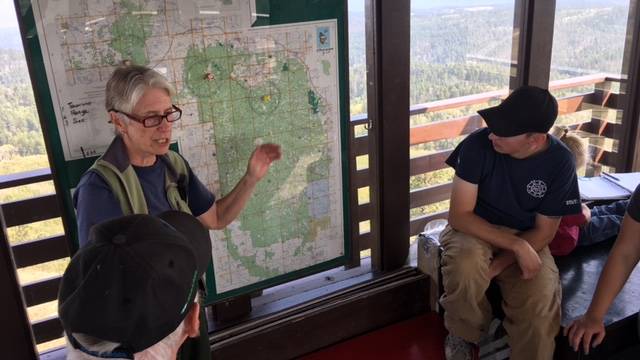 Important safety tip: If you show up at the Cement Ridge Fire Lookout Tower during a lightning storm, bring your own stool.

Lightning stool, that is. Because Barb Peterson will be using hers.

“It’s really something up here when those lightning storms roll through,” says Peterson, who helped host a public visit to the lookout on Saturday. “You’re kind of at eye level with them. And you think, ‘Maybe I should be a little scared.’”

Which is a pretty good time to climb up on the fire stool for a while, just in case. The 14-by-14-foot tower cab is, after all, the prominent point atop 6,647-foot Cement Ridge, just west of the South Dakota-Wyoming line southwest of Spearfish. 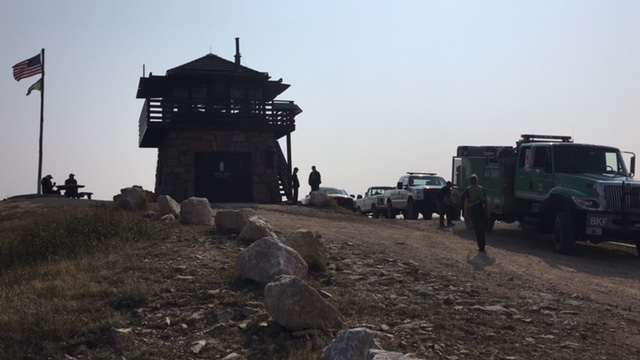 And while the cab is about as grounded as it’s possible to get, a little extra precaution makes sense. Which is where the wood stool with the glass power-pole insulators at the base of each of the four legs comes in.

“Then I climb up on my stool,” Peterson said.

It’s a replica of the historic lightning stool that was stolen from the fire lookout a few years back when somebody broke in during the off season. Theft and vandalism occur on a fairly regular basis, even though there’s not all that much to steal or even vandalize, except pieces of history.

And history it is, beginning in 1911 when the Northern Black Hills site was chosen for a fire lookout that began as a one-room log cabin that became home and office for a single full-timer staffer during the fire season. The Cement Ridge Lookout was just one of many across the nation that were built after a severe fire season in many states.

There are six operating fire lookout towers on the Black Hills of Wyoming and South Dakota. The U.S. Forest Service has five of them:  Cement Ridge; Elk Mountain near the Wyoming line west of Custer; Bear Mountain northwest of Custer; Custer Peak between Lead and Rochford;  and Warren Peak in the Bear Lodge Mountains north of Sundance. The state of South Dakota has one operating fire lookout at Mount Coolidge in Custer State Park.

The Cement Ridge Fire Lookout Tower was upgraded by the Civilian Conservation Corps in 1941, when the current structure was built. It has a stone base with a single room that was probably a vehicle shelter ad storage area located beneath the lookout cab. But it's the cab Peterson spends her workdays, either walking and watching from the outdoor catwalk or scrutinizing the surrounding landscape from behind the big glass windows on four sides.

There is plenty of technology at work these days on fire detection and suppression, but it’s still tough to beat a good pair of human eyes. Barb does most of her watching without any magnification, getting the broad view. But she also scans the forest with binoculars and sometimes with a more powerful spotting scope to narrow in on suspicious signs of smoke.

When she detects a fire, she turns to one of the old-but-effective tools of the trade — the Osborne Fire Finder. Peterson demonstrated the device Saturday during an open house and public tour of the fire lookout, which is listed on the National Historic Lookout Register. 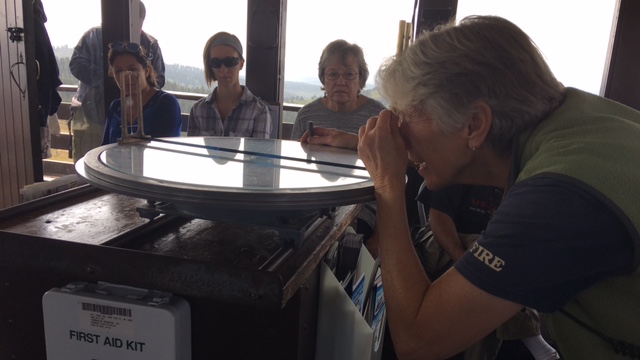 Topics at the open house included the history of the Cement Ridge Lookout, the purpose of the National Historic Lookout Register and the history of wildland fire suppression on the Black Hills National Forest. In was part of Archaeological Awareness Month in Wyoming.

The Osborne Fire Finder at Cement Ridge, like others still in use across the nation, is a functional piece of archaeology itself, with an essential role in wildfire detection and suppression. The first version of the device was created in 1909 by William Bushnell “Bush” Osborne, Jr., a U.S. Forest Service forester working on the Oregon National Forest. He would improve on the first model with a succession of changes, the last coming in the 1930s.

Fire finders dating back to the 1930s and carefully maintained are still in use across the United States and in foreign countries for pinpointing fire locations. The units include a circular topographical map mounted on a table with a rifle-like sighting mechanism mounted on a railing running around the map.

Visitors got a chance to peek through the sights of the fire finder. And they listened as Peterson, a retired CPA now in her ninth year at the lookout, described the early years at fire lookout towers. Those lookout pioneers lived at the station throughout the fire season and were expected to hurry to the fire for initial attack once they reported it.

“I’m glad we don’t have to do that anymore,” she said. 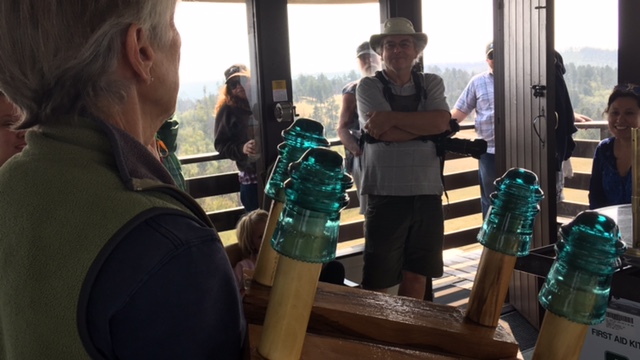 Peterson was followed by Brian Raffery, Assistant Fire Management Officer for fuels on the Bear Lodge Ranger District of the Black Hills National Forest. He spoke of the forest diversity that surrounds Cement Ridge and the benefits of “disturbance” on a forest grown thick with ponderosa pine.

In it's a perfect place for making the forest-diversity case. The mottled terrain around Cement Ridge reflects a mixture of trees and shrubs produced by disturbance. In this case, it was a big wildfire that started in the nearby Iron Creek area in 1893, scorching the surrounding forest.

“It was probably mostly ponderosa pine back then or open areas,” he said. “After the fire, the grasses came in first, then shrubs and then hardwoods.”

It’s that forest diversity that attracts me to Cement Ridge, for the view and each September for the ruffed grouse hunting across the line in Wyoming. Because of that diversity caused by a wildfire more than a century ago, there are expanses of aspen, birch and shrubs, offering food and lodging for scattered populations of ruffed grouse. The birds are rare in much of the Black Hills, primarily because of ponderosa pine encroachment.

But even at Cement Ridge, the pine are always working to retake the forest. And Rafferty noted that pine on the tops of slopes covered with aspen are slowly encroaching as they grow taller and throw more shade on the sun-loving deciduous trees below.

“Eventually, the pine will take over,” Rafferty said. 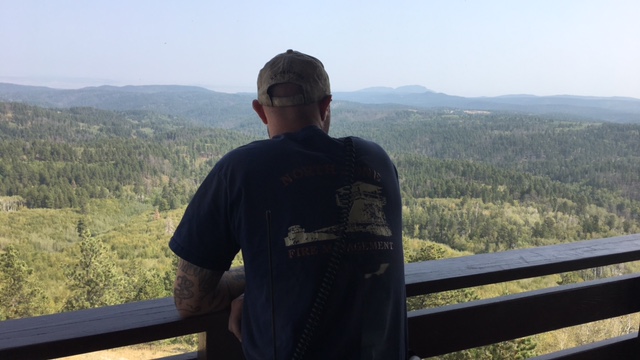 Historically, regular wildfires were part of the natural disturbance that maintained diversity on the forest. But fire-control efforts that intensified as more homes were built on private land within the exterior boundaries of the forest have reduced the historical role of fire in the forest, while preserving homes. But the missing disturbance matters, Rafferty said.

“We’re a disturbance-based ecosystem,” he said. “And really,  the more disturbance we have, it’s really beneficial to the health of the forest.”

Logging is a disturbance, and can be beneficial when done in ways that keep fire suppression and forest health and diversity in mind along with commerce. And even mountain pine beetle can have a positive long-term impact on diversity, despite short-term negatives of ugly dead trees and tangled ground cover that makes fighting fires more challenging, and more dangerous, Rafferty said.

Patches of dead pine are visible in all directions from Cement Ridge, although Rafferty said the beetle kill there was less than in many areas of the forest. Existing plant diversity might have helped slow the bug down in that area, he said.

But because of the ground clutter from the bug-killed areas, any fire would be fought a bit differently, with crews backing off to areas that aren’t quite so dangerous and may provide a better location to fight the first. Aspen stands are among those more defendable areas, as are roads, Rafferty said.

The fact that the Black Hills National Forest has a fairly extensive road system — a reality that some criticize for its environmental effects — is also a benefit in fighting fires and managing the forest, Rafferty said. The logging industry in the Black Hills is unusually healthy compared to those in most areas of the nation. And that is also an asset in Black Hills management, Rafferty said.

So are prescribed burns in carefully chosen areas of the forest, he said.

As Rafferty finished up with fire safety and home-protection tips for people living in or near the forest, Peterson stood on the catwalk explaining to other visitors that the open patch on a distant slope was the ghost town of Tinton, which began as a gold-mining camp but earned its name for tin production.

The abandoned town sits on the Wyoming-South Dakota line and a small mining company continues to work there. Seen from Cement Ridge, Tinton is a bit of a scar on the landscape. But it’s a scar with a history, and one of the many that Peterson shares with visitors to the lookout.

She does that formally during public tours when the tower and cab are open, and more casually when visitors to the Cement Ridge summit walk over to the base of the tower. Then she typically leans over the catwalk railing too converse with people down below.

Don’t talk too long, though, because she’s got serious work to do watching for fire.

And if a storm comes up, you might want to just forget the whole lightning-stool question and head for lower ground. 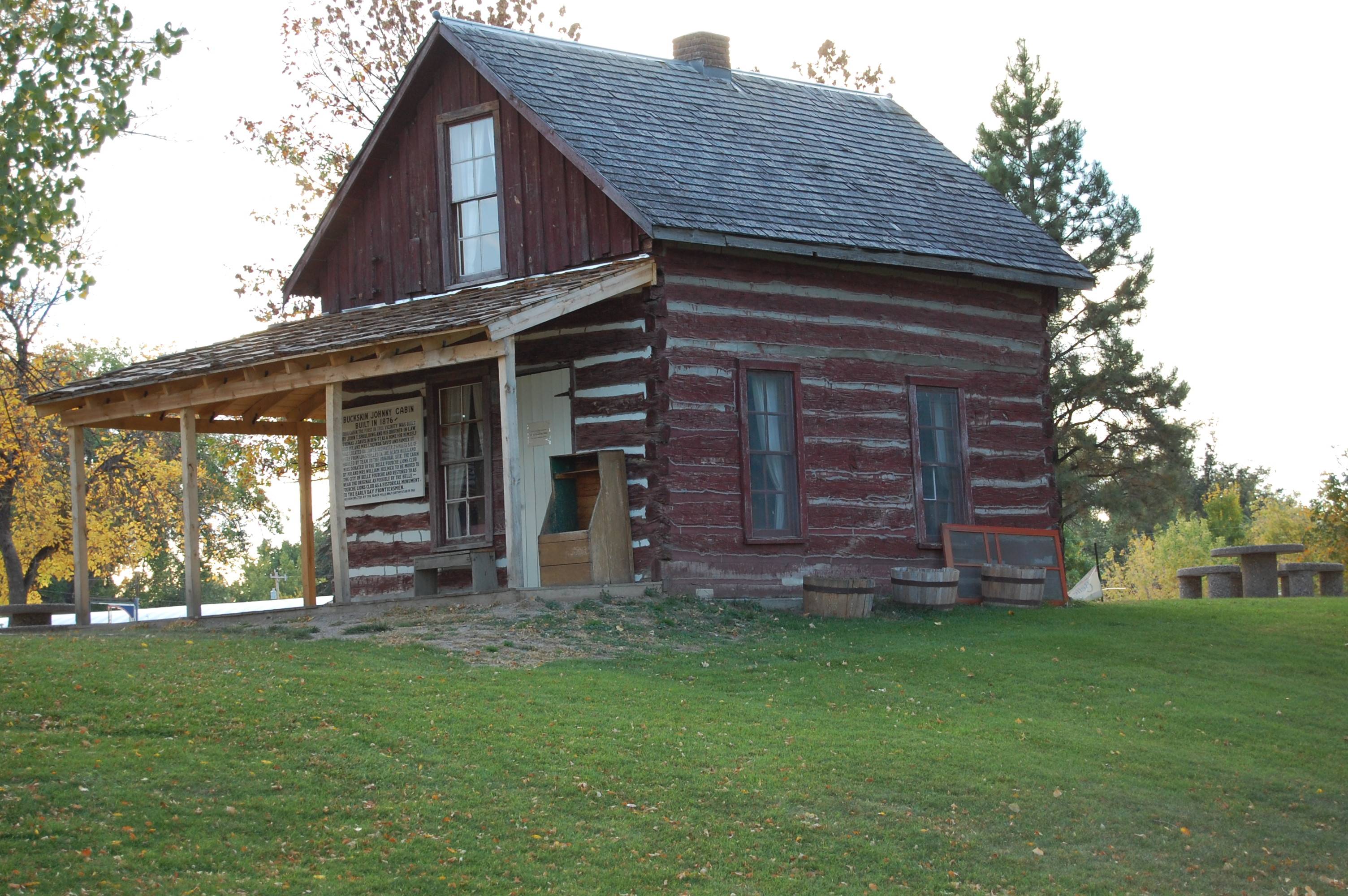 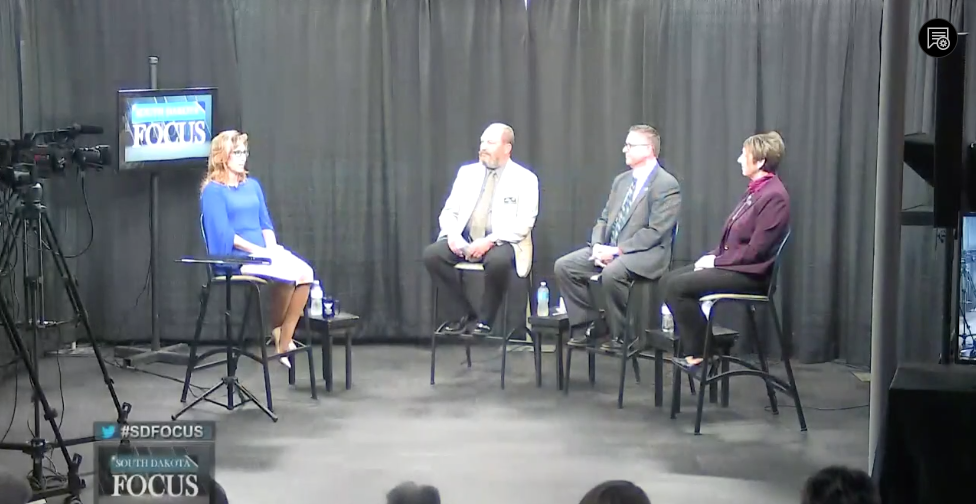