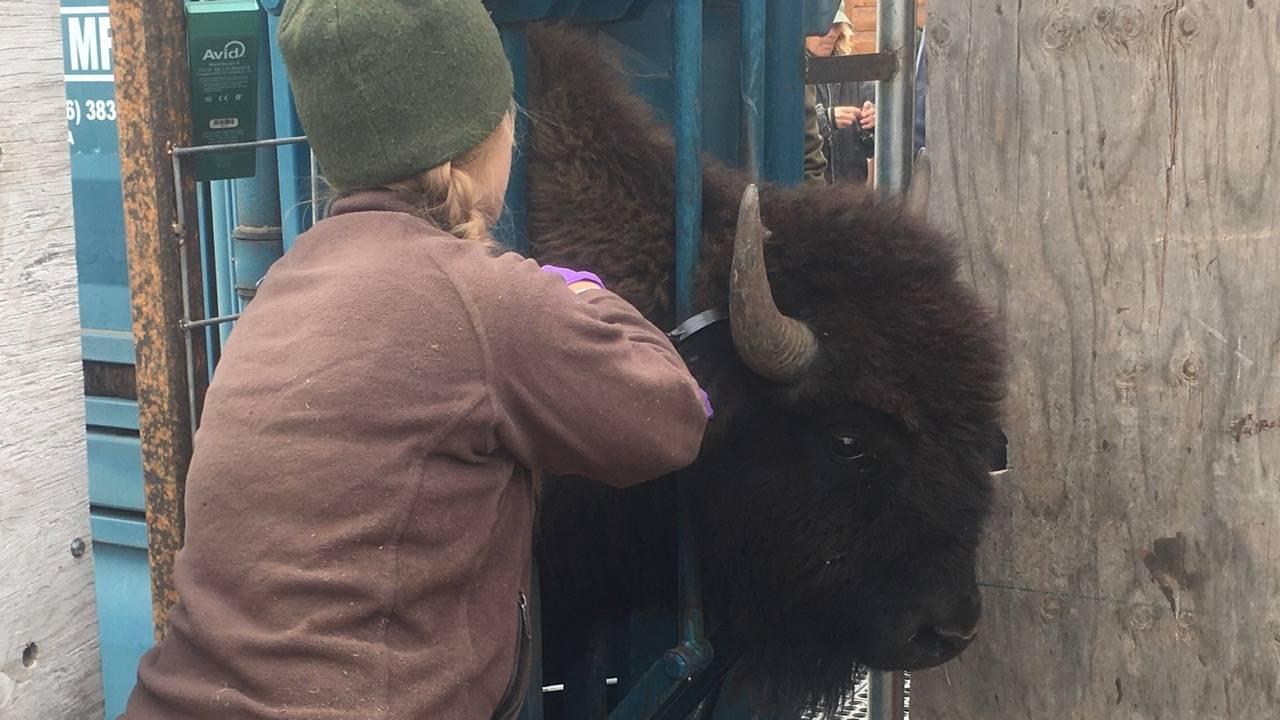 The big news this year at the Wind Cave bison roundup — which should not be confused with the more extravagant affair across the fence in Custer State Park — was the GPS collars placed on 10 bison cows.

At least, that was the plan for the big news.

Then that Custer State Park bison showed up in the Wind Cave bison corrals, where it was definitely not supposed to be.

“What’s going on?” I said to Tom Farrell, Wind Cave’s chief of interpretation, as we stood in a wooden observation box above the Wind Cave corrals, watching National Park Service workers down below move around with heightened focus.

Farrell checked around and came back with an answer:

“I guess there’s a Custer Park bison in there, and they’re getting it isolated.”

That’s important, because bison in Custer State Park and bison in Wind Cave National Park are not the same, genetically speaking. Wind Cave bison have a particular genetic makeup, free of cattle genes and offering an important diversity of genetics beneficial to the future of the animals in North America, and possibly to research on a greater scale.

“Wind cave has some really unique genetics,” says Greg Schroeder, chief of resource management at Wind Cave. “We actually have 10 alleles that have not been found in any other bison herd in North America.”

Without getting too technical — something I’m incapable of doing when discussing genetics anyway — let’s just say that alleles (pronounced “ah-lee-ahls”) are essential variants of genes that matter to the genetic diversity and general well-being of the bison.

So, it’s pretty important that the Wind Cave bison don’t fraternize with the Custer State Park herd. And there was clearly a sense or urgency when the CSP bison turned up, even though the biggest threat of an unwanted genetic convergence passed along with the bison rut last summer.

“It’s important to remove CSP bison from our herd before they start breeding with our animals, due to our unique genetics,” Farrell says. “In this case, we just called CSP and they came down and loaded it from the pen and took it back.”

It would have been more complicated during a different season, especially if the CSP bison had not already been herded into the Wind Cave corrals along with the other bison. So it was easy to separate and hold until the CSP staffers showed up.

“If it was out in the wild, we’d call them and work with them to remove it to CSP,” Farrell said. “As a last resort, and this would typically be during the rut, we’d had to shoot the animal. This is why we improved our cattle guards and installed a stronger fence between the two parks in recent years.”

There have been cases in the past, Farrell says, where a CSP bison had to be shot. But much is done to avoid that last resort while preserving the genetic characteristics of the Wind Cave bison herd, which supplies animals for other herds across the nation through the roundup and distribution of surplus bison.

It’s an all-business affair, this roundup, with a style that stands in stark contrast to the festive mix of roundup and regalia and commerce at the Custer State Park Buffalo Roundup and Arts Festival in late September. Thousands of spectators show up each year to observe. Special guests get to dress up like cowboys or cowgirls and ride along in the final hours of the roundup.

It's a real working roundup. And a celebration. And a show.

The Wind Cave Roundup, which relies in advance on UTV riders and the assistance of the helicopter professionals from Sky Aviation in Worland, Wyo., is a more mundane, more pragmatic event. Open to the news media but not the general public, it is driven by science and herd management and biological and landscape imperatives.

It’s a big part of the management plan at Wind Cave, but it affects bison management in parks and conservation preserves and on tribal lands across the nation.

“Every two years at Wind Cave, our herd grows large enough that we have to remove some animals to keep it at a stable population size,” Schroeder says. “So we try to gather up most of the herd, then we’ll remove about 80 percent of our yearlings and 2-year-olds and offer them up to other conservation groups out there and organizations that are helping to put bison back on the landscape.

Going into the roundup, the Wind Cave bison herd was at about 550 animals. With a management goal of 350 to 450 based on available habitat, the plan was to remove 110 to 125 animals for distribution elsewhere.

This year, about 85 bison were headed to The Nature Conservancy, for preserves in Iowa, Illinois, Missouri and Kansas. And with coordination from the Inter-Tribal Buffalo Council, about 40 bison were headed to the Flandreau Santee Tribe in eastern South Dakota, the Prairie Island Indian Community of the Mdewakanton Sioux Tribe at Red Wing, Minn., and the Red Lake Band of the Chippewa north of Bemidji, Minn.

All will play a role in preserving and protecting the unique qualities of the Wind Cave herd while continuing the work of returning bison to traditional landscapes, advancing public education and strengthening Native American traditions.

“We don’t necessarily know what the unique genes are going to do, but the main thing we’re helping to do here is to preserve them — not only in the bison in Wind Cave, but also the ones that we send out,” Schroeder said. “They can go out to other areas and help spread those genes that aren’t represented anywhere else in the country.”

At the corrals where the whole system begins, each bison is run through chute and checked to see if it has already been fitted with a computer chip. It not, it is held and examined for information on sex and age. In addition, blood and tail-hair samples are taken on any bison that hasn’t already been handled, charted and fitted with a passive integrated transponder (PIT) tag and ear tag.

“We do that so we know who the animal is and we can individually ID them later,” Schroeder said. “So we can keep the genetics of the herd basically on file. That way whenever we have a need like a research project or someone wants to look at it, we have that already collected and we don’t have to go back out and capture the animals to get that information.”

This year, there was added duty in fitting the 10 bison cows with the GPS collars to monitor their travels within the park and help identified preferred areas and habitat types.

“These collars will last for a couple of years. And we’re really going to be looking at how these animals utilize the habitat that’s available here on a fine scale,” Schroeder said. “They’ll take multiple locations a day. And then we’ll be able to look, based on the forage that’s available and water resources available, at how they utilize those.”

Over, in some cases perhaps, over-utilize them.

“Then maybe with some of that information we can modify some of the habitat or maybe take the pressure off those areas that are being hit a little harder and maybe spread that around a little bit,” Schroeder said.

The public will get an inside look at the travels of the collared bison, too. Information from the collars will be available at the park visitor center store, which is run by the Black Hills Parks and Forestry Association. The association paid for the collars.

After the samples were taken and the tags and collars applied, park staffers picked those yearlings and 2-year-olds that would be sent out to the tribes and The Nature Conservancy preserves. Or as Schroeder put it, they “basically randomly decide who gets to stay and who gets to go.”

Except for the CSP bison, of course. There was nothing random about that. It had to go.