The Madison Bulldogs defeated the Tea Area Titans 39-0 in the 11A State Championship game. This is back-to-back championships for Madison.

Tea Area got the ball first, but the drive stalled in Bulldogs territory. Madison got on the board quickly when quarterback Josh Giles found wide out Mason Leighton for a 71-yard touchdown. The extra point was no-good, but it still gave the Bulldogs an early 6-0 lead.

With 1:53 to play in the first quarter, Giles found Jaxon Janke for a 33-yard touchdown. This extended Madison’s lead, 12-0.

Early in the second quarter, Jadon Janke recovered a Payton Conrad Titans fumble and returned it 80-yards for a touchdown.

Tea Area was able to force a turnover on downs midway through the second quarter to get the ball back. However, Jaxon Janke jumped a Conrad pass for a 44-yard pick six.

At the 54-second mark of the second quarter, Giles completed a 21-yard touchdown pass to Leighton. This gave Madison a 32-0 lead heading into the locker room for halftime.

With 4:16 to play in the third quarter, Giles and Leighton hooked up again, this time from 19-yards out. This extended the Bulldog lead to 39-0 over Tea Area.

Due to a 35-point lead in the second half, the game went to a running clock – meaning the clock doesn’t stop for incompletions or running out of bounds.

Mason Leighton of Madison, who had six catches for 154-yards and three touchdowns, is the 11A Joe Robbie MVP. 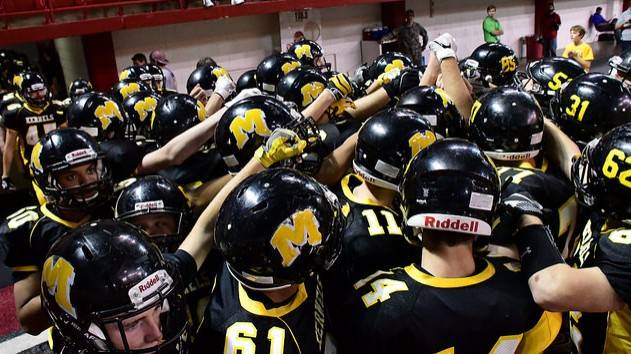