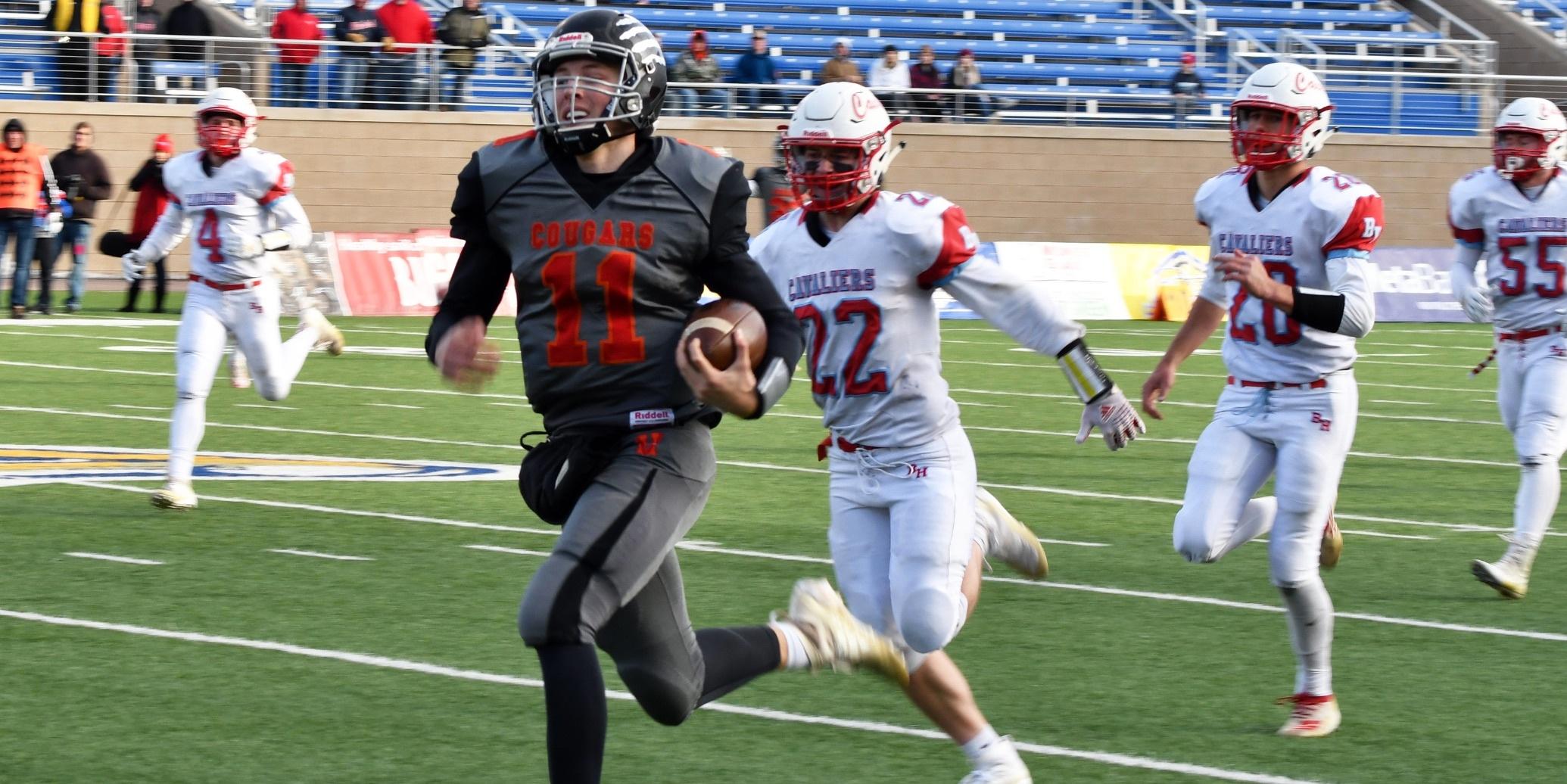 Viborg-Hurley received to start the game, but quickly went three-and-out. Bon Homme’s opening possession showed some promise, but it didn’t result in points either as Joshua Crownover missed a 31-yard field goal attempt.

The Cougars second drive on offense also went stale for another three-and-out. During the punt attempt, the ball sailed over punter Chase Mason’s head and into the end zone for a safety. This gave Bon Homme a 2-0 lead midway through the opening quarter.

Viborg-Hurley got a spark on their ensuing defensive possession as sophomore Hayden Gilbert came up with an interception on a heave from Crownover. Unfortunately for the Cougars, their offensive once again came up short. Through the first quarter of play, they had -10 yards of total offense.

Bon Homme found the end zone early in the second quarter when Riley Rothschadl connected with Joshua Crownover for a 12-yard score. This increased the Cavaliers lead to 9-0.

Viborg-Hurley found offensive success on their next drive when Mason found Shane Anderson for a 56-yard touchdown. A two-point attempt was no good, and at the 10-minute mark of the second quarter, Bon Homme held onto a 9-6 lead.

Mason found Anderson again on the Cougars next offensive possession, this time on a 49-yard touchdown catch and run. Another missed two-point try held Viborg-Hurley’s lead to 12-9 over the Cavaliers.

With 2:15 to play until halftime, Bon Homme retook the lead at 16-12. Crownover scored from 8-yards out on a fourth down quarterback keeper.

Viborg-Hurley wasn’t done though… Chase Morgan broke free for a 73-yard touchdown run. This gave the Cougars the lead back at 18-16 at the 1:08 mark.

Bon Homme wasted no time in hitting a big play to start the second half. Noah Heesch exploded for a 74-yard touchdown run, tying the 9AA state championship game record for longest run from scrimmage. After a successful two-point conversion, the Cavaliers led 24-18.

With 6:34 to play in the third quarter of play, Viborg-Hurley capped off an 80-yard, 11 play drive with an 8-yard quarterback keeper from Mason. After the successful two-point attempt, the Cougars led Bon Homme 26-24.

Viborg-Hurley would increase their lead on its next possession when Mason cut loose for an 80-yard run. This run DOES break the record for longest run from scrimmage in a 9AA state title game. The Cougars held a 34-24 lead with 3:29 to play in the third quarter.

The Cougars increased the score margin to 42-24 early in the fourth quarter as Carter Gust blasted up the middle for a 29-yard touchdown.

Viborg-Hurley would score one more time to put the dagger in the contest, Mason to Anderson for a one-yard touchdown pass and catch. This gave the Cougars a 50-24 lead with 3:09 to play in the contest.

This is the first state championship for the Viborg-Hurley co-op, and the first for the community of Viborg since 2000. Cougars quarterback Chase Mason had a total of 416-yars (passing and running), which broke the 9AA state title game record of 413 total yards set by Cory Jacobson, also of Viborg-Hurley, in 2010. Jacobson is an assistant coach for this year's Viborg-Hurley team as well.