On Thursday, January 30, 2020, Oklahoma-based artist Marilyn Artus added South Dakota's stripe to Her Flag at an event at the South Dakota Cultural Heritage Center in Pierre. Her Flag is an national collaborative project commemorating the centennial of the ratification of the 19th Amendment to the U.S. Constitution. The 19th Amendment affirmed at the Federal level that women have a right to vote.

Vermillion artist Klaire Lockheart created South Dakota’s stripe and watched as her work was sewn onto the bottom of what will one day be an 18-foot by 36-foot flag. Her flag is in more or less the same design as the American Flag, but instead of 13 stripes, Her Flag will have 36, one for each of the 36 states to ratify the 19th amendment. The stripe at the top of the flag represents Wisconsin, the first state to ratify the suffrage act. South Dakota was the 21st state to ratify, preceded by North Dakota and followed by Colorado.

Her Flag is the brainchild of Oklahoma-based artist Marilyn Artus. She wants it to be something can people together in a country she sees as quite divided.

"After the last Presidential election a lot of us were really happy and a lot of us were really sad. But I really felt like every American needed to step in and contribute to the country in a positive way because there's so much division, people at each other's throats and it just doesn't get us anywhere. It's picking our commonalities and finding things we can all as Americans support," Artus said.

The Her Flag project is an ambitious adventure for Artus. She planned the details of it for two years before launching into it. She’s traveling to 36 states over the course of 14 months in 17 separate trips. It’s 50,000 miles, and 132 hotel nights.

Every state event is a performance that includes music and everyone who contributes to the Her Flag project is paid for their time.

"Women, and especially women artists have been asked to work for free for so long and it was just a really important part of the project," said Artus.

Klaire Lockheart’s South Dakota stripe began as a four-foot strip of fabric featuring the printed images of 4 toy dinosaurs. The strip became a stripe when Lockhart repeated the pattern on a 26-foot piece of purplish-pink fabric. Why dinosaurs?

“I picked dinosaurs to represent that women have been fighting for equal rights since the dawn of time. And I use toy dinosaurs to invite the audience in and consider my humor, which I amuse myself quite a bit, but when I do something silly on the surface, it invites the viewers in and helps them contemplate these deeper issues like the fight for women's suffrage a hundred years ago. It was a way to represent like the ferociousness and the strength and tenacity of women from history and then to make sure it's very South Dakota. I only use dinosaurs that are from South Dakota originally,” Lockheart said.

Lockheart has art degrees from South Dakota State University and the University of South Dakota. She has portrayed women’s issues and the role of women in society in many of her works. Lockheart is one of more than 240 artists who applied for the Her Flag project nationwide. The 36 women selected for the collaboration bring diverse talents, but they do have certain things in common.

"Most of them are professionals in their various fields, a lot of graphic designers, and the biggest artist is the woman who designed the Beatles Sgt. Pepper's 'Lonely Hearts Club Band' album. That is really exciting for me to be included on something with such high ranking and well-known artists," Lockheart said.

Artists were free to create their stripes using whatever design they desired, as long as they stayed within the restrictions of length, width, and base color scheme.

"I had no idea what any of them we're really going to finally do. I just really looked at their past work and what they had to say. I love surprises, obviously," Marilyn Artus said.

Her Flag might be the biggest flag work Artus has produced but it’s certainly not her first.

"Before I even started on this project, I'd been using the American flag as a feminist vehicle for quite a while. My pieces that I have in galleries and stuff are the American flag and have been for quite a few years. It just seemed like a natural progression to take that imagery and use it in a much larger way. I like using the flag because it's related to history and this is about history and also the women's movement started in a sewing circle and to have sewing part of celebrating this anniversary was really important to me and felt like the right way to do it."

Artus calls Her Flag a love letter to the 36 states that ratified the 19th amendment a century ago. But she also sees it as a way to remember and honor all of the women and men who worked for woman suffrage when it seemed like only a far-off dream.

"It was 72 years from that first women's rights conference in Seneca Falls (New York) to when the amendment was ratified," said Artus. "Those 72 years of history... women died before they ever got to vote. Worked their entire lives. And I think in our culture we want things so fast because things happen in our phones, all the computers, technology, but change that large, it takes time."

Although Klaire Lockheart chose a light-hearted albeit provocative design for the South Dakota stripe, her message is a serious one.

"Suffrage is important today for women today because even though that seems like it was a battle that was won over a hundred years ago, Native American women didn't get equal voting rights until much later, same with other women of color. And it's important for me as a woman to be active politically and exercise my right to vote and be a part of our democracy."

Marilyn Artus still has quite a bit of traveling to do, with 15 states to visit and 15 stripes to add to Her Flag. She expects to finish the flag by August 18, 2020, the 100th anniversary of the 19th Amendment’s ratification.

Learn more at the Her Flag Web site and Facebook page. 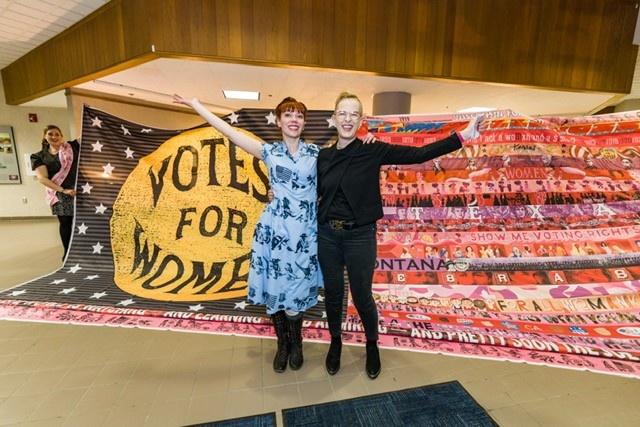 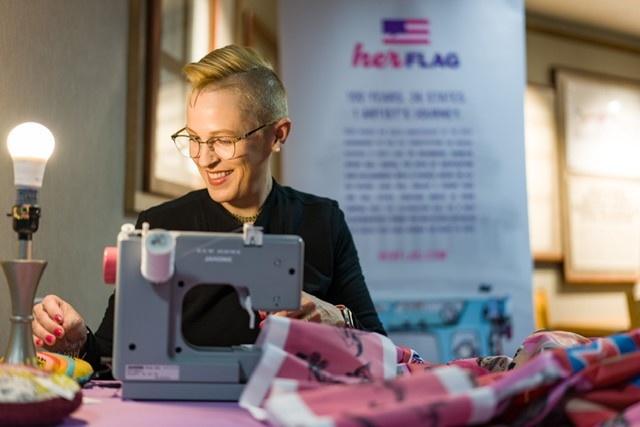 3 / 9
Share This Gallery
Her Flag with the South Dakota stripe attached. 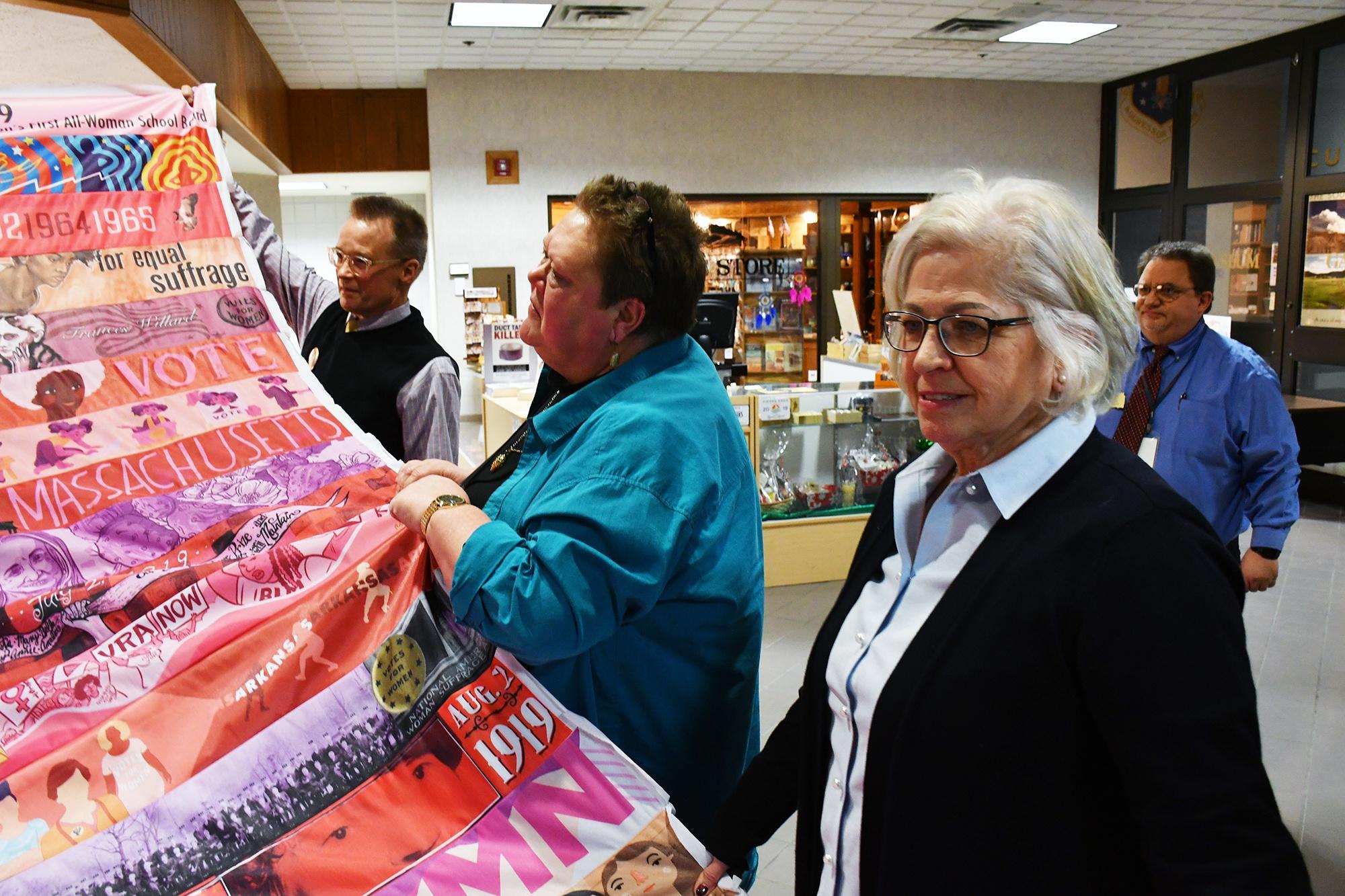 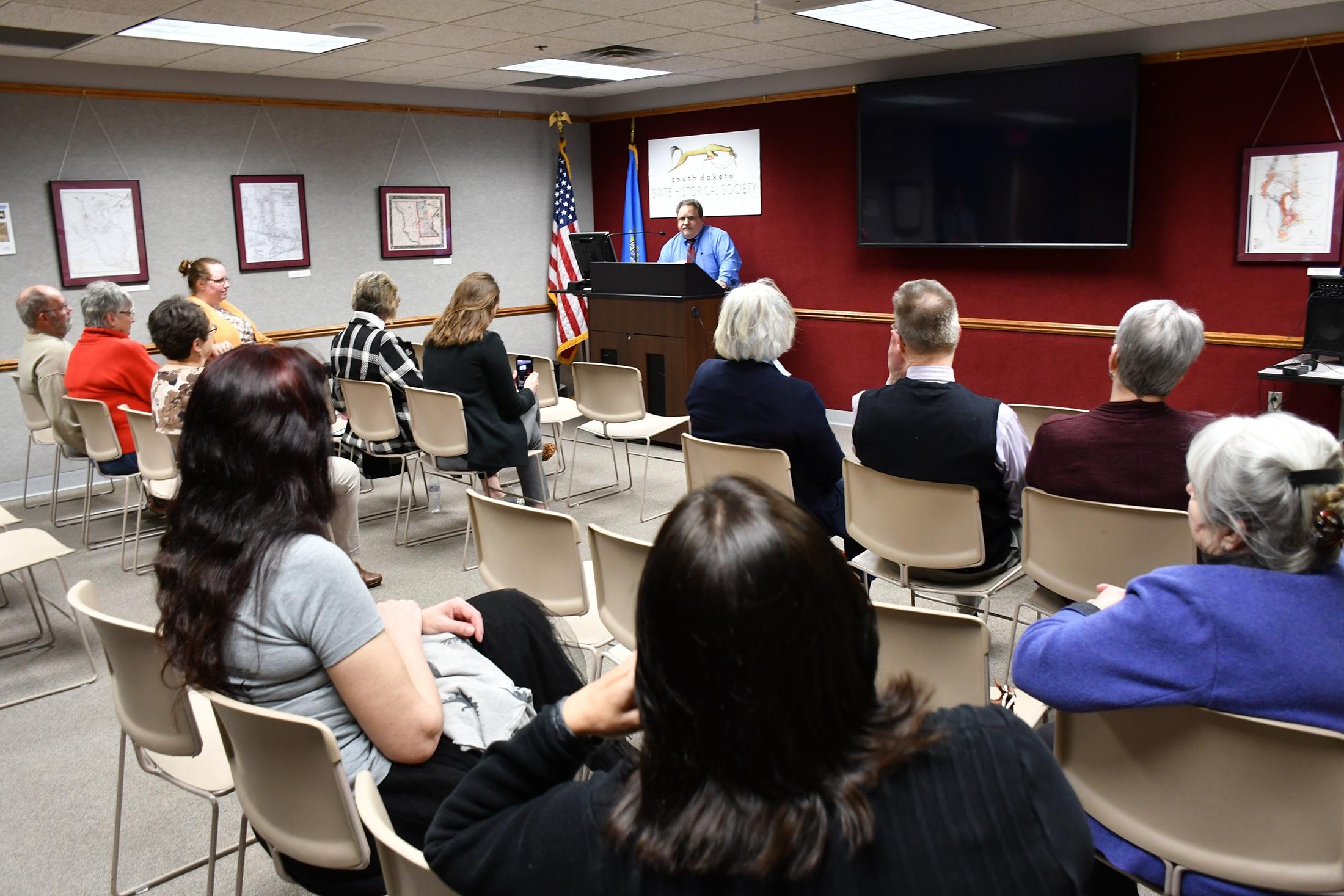 6 / 9
Share This Gallery
Janelle LaFrentz, a music educator from Sioux Falls, performs for the Her Flag audience. 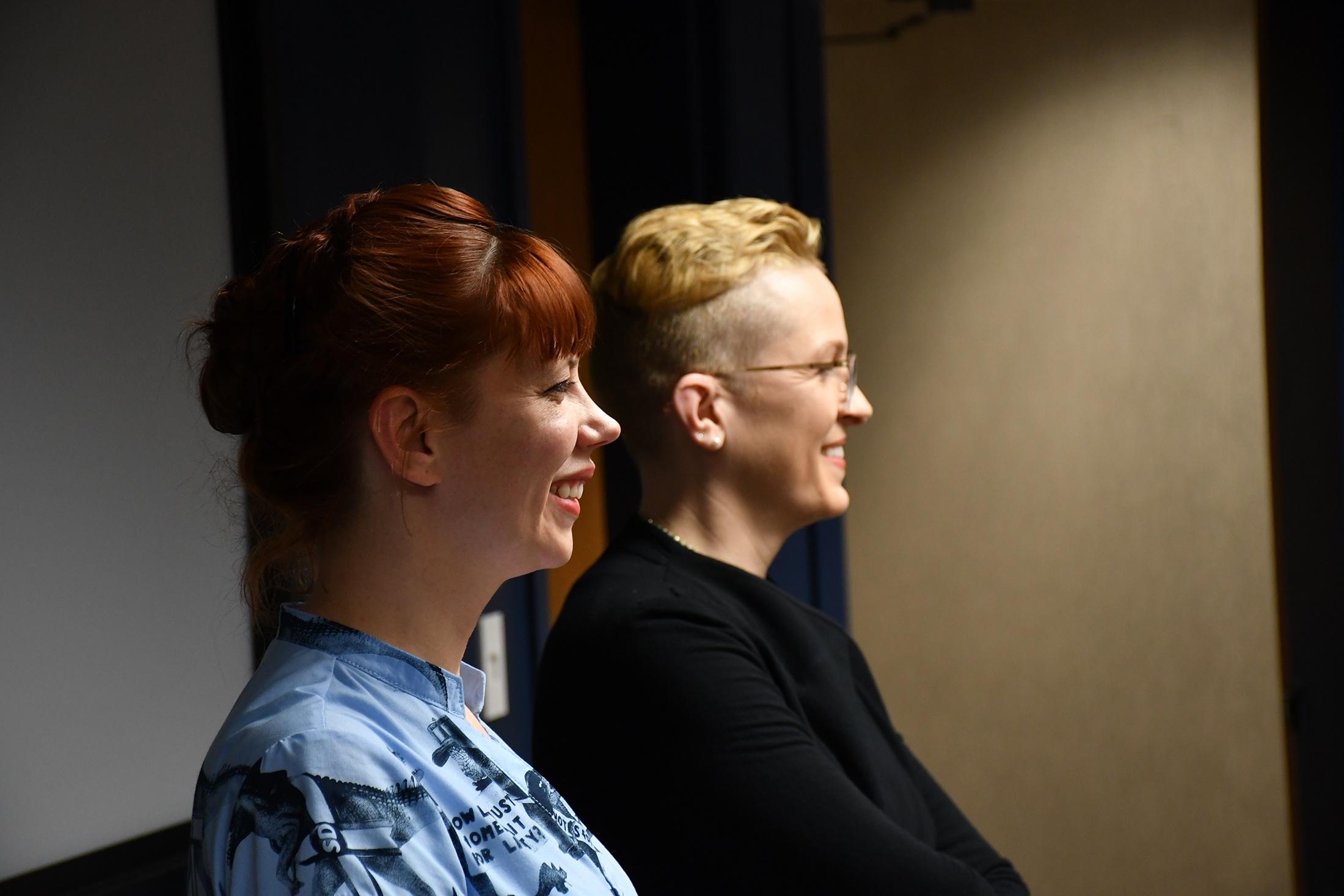 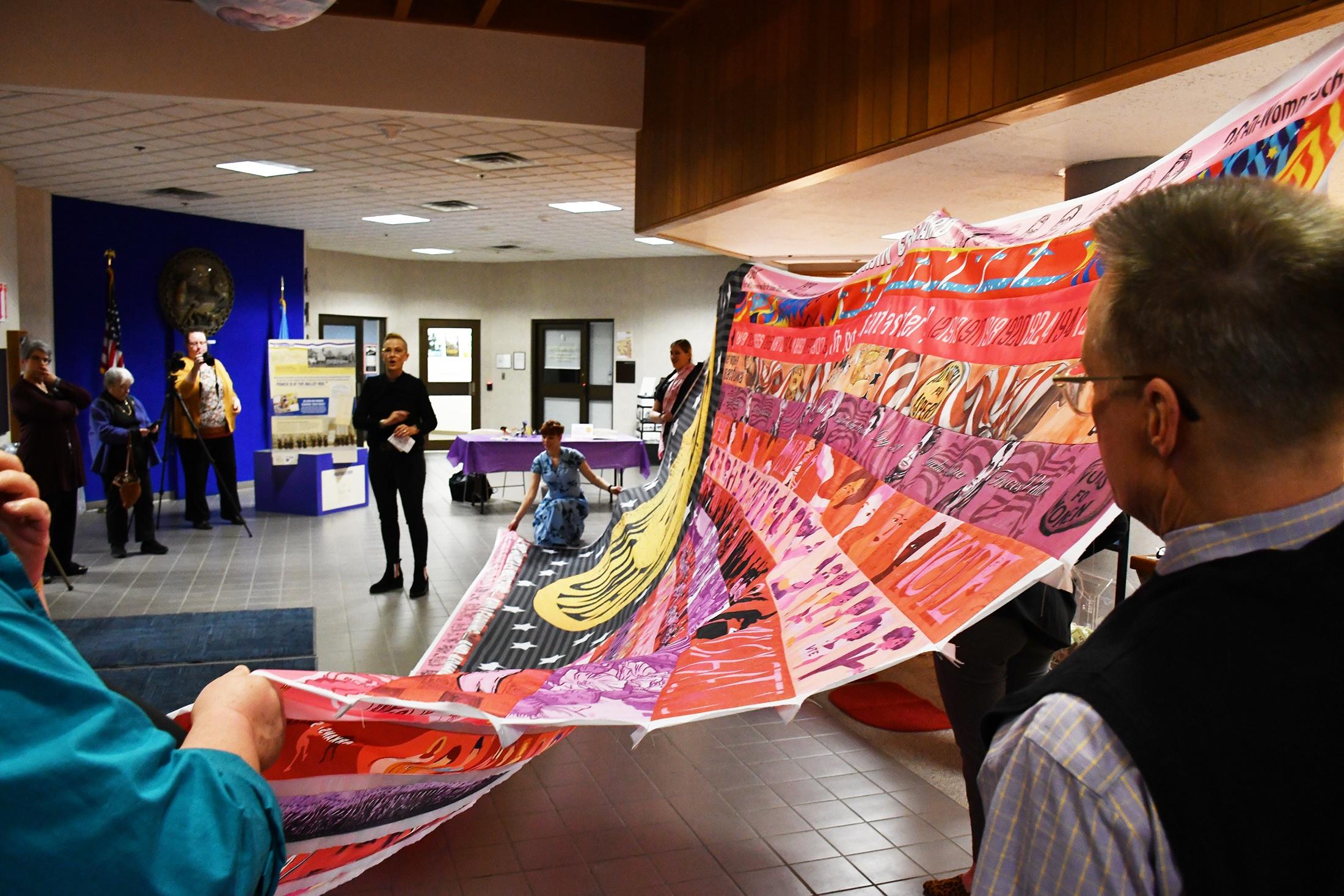