He was captured on March 8, 1864 at Big Black, Mississippi (Vicksburg Campaign) and imprisoned at Andersonville, Georgia, and Florence, Georgia. He escaped on January 10, 1865 and returned to Union lines on February 1, 1865. He was mustered out of service on April 17, 1865.[2]

After the war he attended the University of Wisconsin for one year and then went to the State Normal School at Platteville. He worked as a principal in Darlington, Wisconsin and studied law.  He was admitted to the Wisconsin Bar in 1872.

In June, 1872 he moved to Sioux Falls, Dakota Territory and entered a law partnership with Richard Franklin Pettigrew. In March, 1873 he married Fannie L. Kingsbury, sister of George W. Kingsbury, in Delavan, Wisconsin. They had four children: Sioux, George, Fannie and John.

In 1877, Melvin and George M. Smith established the Dakota Pantograph (newspaper) which they sold after a few months. They then started the Bank of Egan, Dakota Territory with Grigsby as President.

In 1898, Grigsby was commissioned Colonel of the 3rd United States Volunteer Cavalry. The regiment, known as “Grigsby’s Cowboys” was formed at Camp Dewey, Sioux Falls, SD for service in Cuba.  On June 2, 1898 Colonel Grigsby was appointed Brigadier General of the 1st Cavalry Brigade, 1st Army Corps.  He was mustered out of service on September 8, 1899.[7]

In 1903, he resided at 217 S. Dakota Avenue in Sioux Falls with his wife Fannie. Grigsby authored a book entitled “The Smoked Yank” which chronicled his Civil War experiences in Andersonville and at Florence Georgia. He died on February 15, 1917. He was buried in Mt. Pleasant Cemetery. [8]

In the Moment Interview with: 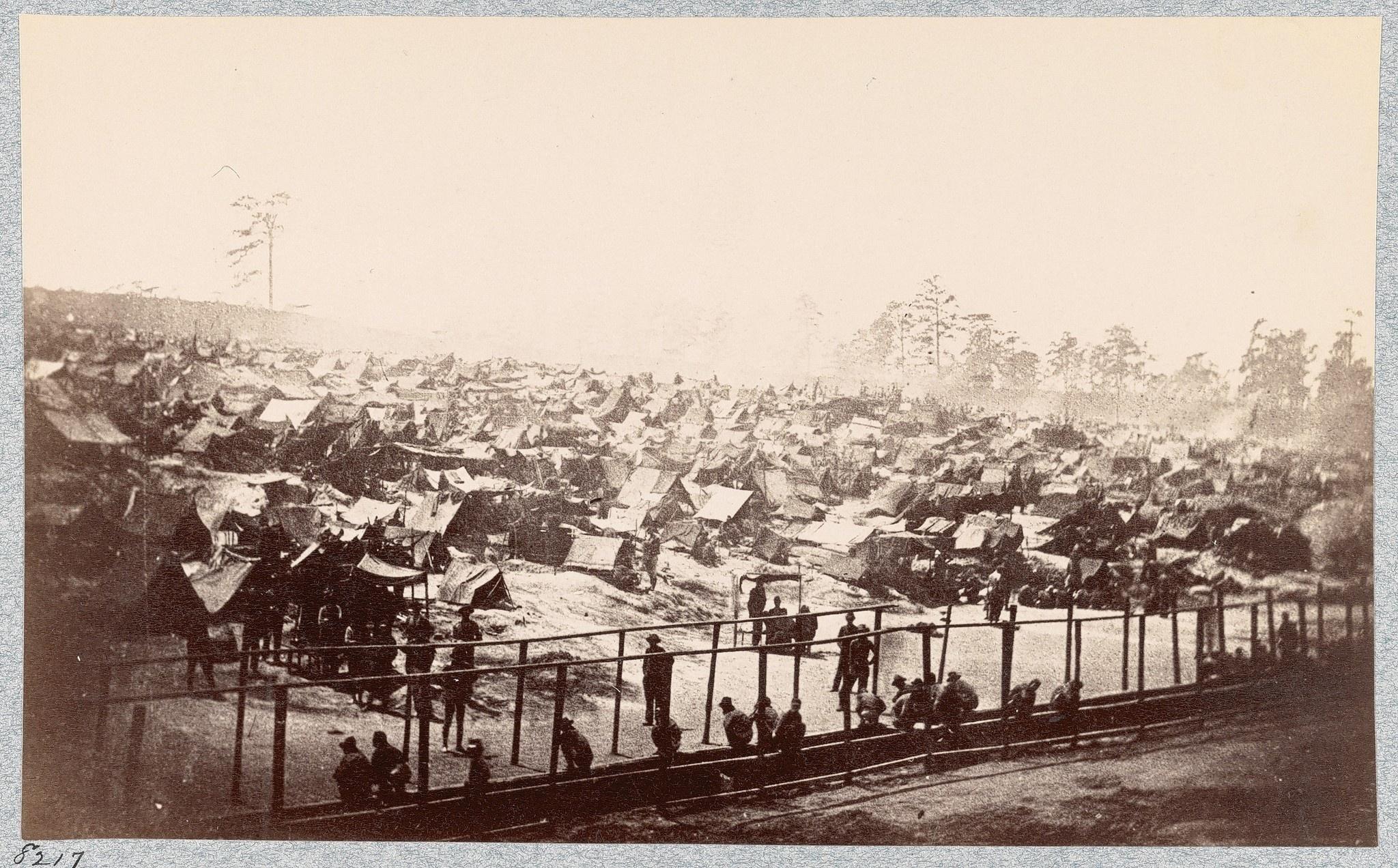 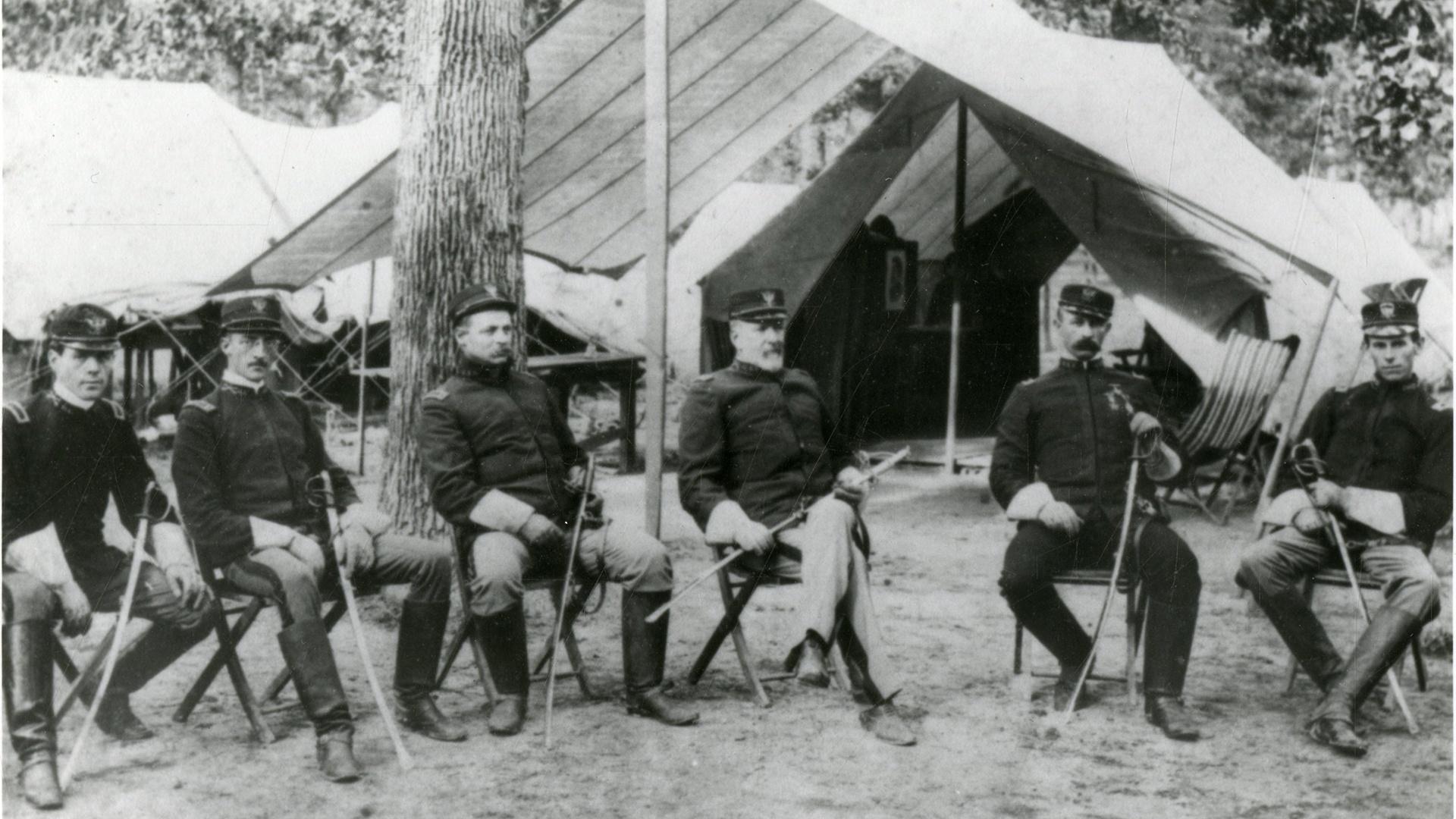 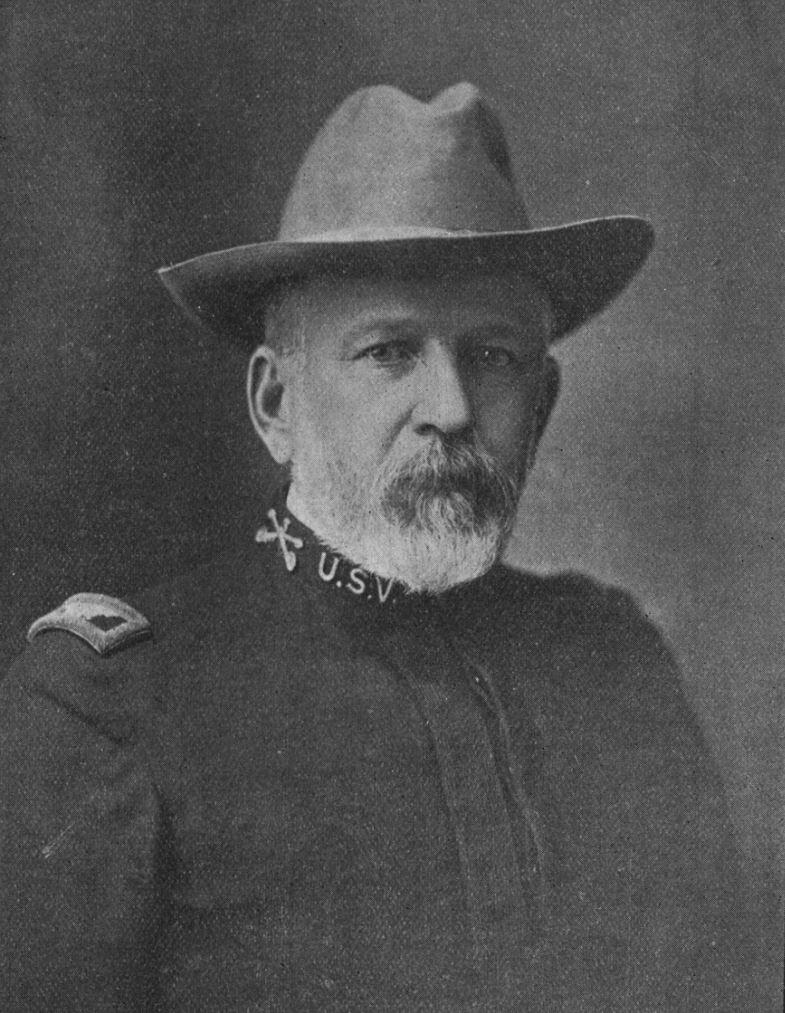 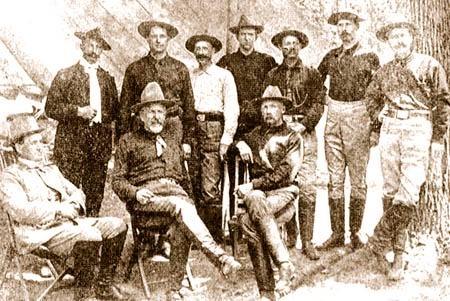 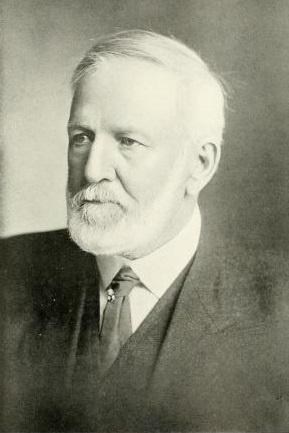 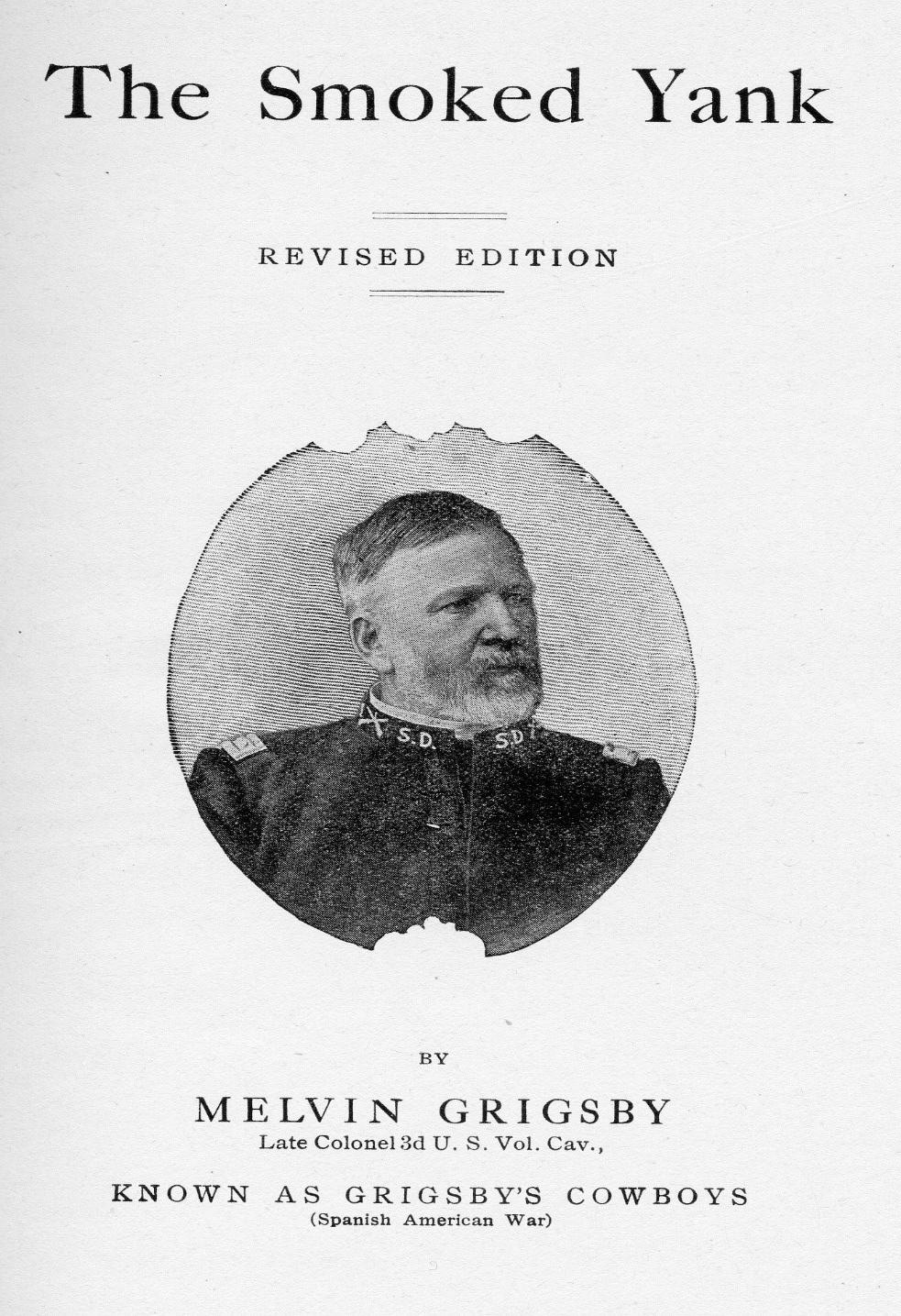 Transcript of an interview with article author Bill Hoskins on SDPB radio's "In the Moment" program.

Lori Walsh: You're listening to In the Moment on South Dakota Public Broadcasting. Well, not long after the end of the Civil War, tens of thousands of people came to Dakota Territory seeking land or gold, or the sorts of business opportunities that go with the settlement boom. Thousands of the new settlers were Civil War veterans. Some of them were the movers and shakers of their day, and their influence on the state's business and political culture is still evident. On today's Images of the Past, the first in a series of stories about those veterans. Joining me is Bill Hoskins. He's the Director of the Siouxland Heritage Museums in Sioux falls. Bill, welcome back to the program. Thanks for being here.

Bill Hoskins: Good afternoon, Lori. Great to be back.

Lori Walsh: Now, I just want to establish for listeners before we talk about some of these people and really how many of them came to the Dakota Territory, your experience in this in my mind, is really unparalleled, but this is Civil War history and how it intersects with Dakota Territory and the origins and the beginnings of the City of Sioux Falls. That interest in that and your research on that is, it goes way back. Tell us a little bit about why this topic has been so compelling to you for so long.

Bill Hoskins: Well, a long time ago, when I first started in Sioux Falls at the Old Courthouse Museum in particular, I heard about this army fort called Fort Dakota that stood on the side of Sioux Falls from 1865 to 1869. There were a number of soldiers who died in service there, and their graves had been moved from a military cemetery up on Duluth Avenue to a city cemetery called Mount Pleasant. I went out there one day looking for them, and was able to find their graves in the northeast corner of Mount Pleasant. But I noticed there were a lot of other military markers, a lot of Civil War veterans, and that got me started. Over the years, it's just finding and discovering these great stories has been, really, it's a hobby that also works well with my job. But there's over 350 Civil War veterans buried in the cemeteries in Minnehaha County, and really across the state. They're sort of the people who helped lay the foundation for our state and a lot of our communities.

Lori Walsh: Now, are most of them ... I want to ask this real quickly, are most of them Union soldiers. Tell me a little bit about, did Confederate soldiers come to Dakota Territory too? What do we know about that?

Bill Hoskins: Well, particularly early on, most of the settlers are Union soldiers, and there's a reason for that. In 1862, Congress passed something called the Homestead Act of 1862, and it provided that people could come and claim government land, a quarter section of land, make certain improvements, build a house, have so many acres under cultivation, and after five years gain title to the property. But, while the Homestead Act provided that if you had served the United States in the Army,, Navy or Marine Corps, you could apply your years of service towards that residency requirement. So if you served three years in Union Army, you only had to live on the land two years to gain title to it under the Homestead Act. But, there was also another provision, and that was that if you ever bore arms against the United States, you are exempt and could not participate. So, as a result, most of those veterans that came, particularly in the early days, are our Union veterans, because the Confederates really couldn't participate in the Homestead Act. They were traitors. So, for instance, in 1885, South Dakota did, or Dakota Territory did a census of veterans, and there's over 10,000 Union veterans in Dakota, but only about 80 Confederate veterans, at the same time.

Lori Walsh: And, it was by design in a lot of ways. The welcome wagon was definitely set out for the Union soldiers, and not ... Yeah, interesting. I want to ask a little bit about some of these people because they have such great stories. Tell me about Melvin Grigsby and folks can go online to sdpb.org/imagesofthepast to find photos, and the full story from Bill. But bill, while you're here, at Melvin Grigsby, who is he?

Bill Hoskins: Well, he's a real interesting character. Melvin was born in Southern Wisconsin in 1845, and when the Civil War broke out, he enlisted in Company C of the 2nd Wisconsin Cavalry. He was only 16 at the time, so he's underage and the 2nd Wisconsin served in the Western theater of operations in Mississippi, Alabama, Tennessee. He was captured at the Big Black, Mississippi in March of 1864, the cavalry engagement there, and was imprisoned in Andersonville, Georgia and later was moved to Florence, Georgia, where he escaped, managed to escape in January of 1865, and returned to Union lines in February of 1865. After the war, he made something of himself.
He went to school. He studied Law at the University of Wisconsin, and came to Sioux falls in June of 1872, where he entered practice of law with Richard Franklin Pettigrew, among others. He's a real interesting character, and he's very involved in the community. He was an alderman for Sioux Falls. He was on the Territorial Council, and in the territorial days, the council was like the Senate is today in the State Legislature. He served on the Constitutional Conventions for the new State of South Dakota. In the 1890s, was serving as the Attorney General of South Dakota when the Spanish-American war broke out. When that happened, he secured a commission as Colonel of the 3rd United States Volunteer Cavalry, known as Grigsby's Cowboys. They were organized at Camp Dewey, over where the Sears Payment Center used to be.

Bill Hoskins: That was Camp Dewey in Sioux falls, for service in Cuba. Melvin did a couple of years in the Army, and then returned to civilian life, and died in 1917. But, you can hear or read about some of his Civil War experiences in a book he wrote, published in 1888, called Smoked Yank. It's an entertaining read.

Lori Walsh: Okay. I want to go back to the whole idea that he escaped. Was that common to escape from being a prisoner of war? Did that happen all the time in the Civil War, or was that a fairly big deal?

Bill Hoskins: Certainly some do, but not a lot.

Lori Walsh: I wouldn't think so.

Bill Hoskins: He states, and he spent a month behind the lines before you re-entered, rejoined Sherman's Army as they were marching to the sea. So, that's an accomplishment in and of itself and-

Bill Hoskins: The guy's got some brass. Yeah.

Lori Walsh: Yeah. So, the Grigsby's Cowboys and then this connection with R.F. Pettigrew, what kind of influence do we see him having here? I mean, are he and Pettigrew friends? Do you sort of see some of his connection Pettigrew's Washington or federal efforts? What do we know about their friendship?

Lori Walsh: I should have known that.

Bill Hoskins: That went along. Supposedly, he knew Teddy Roosevelt. Actually, there's a book about Grigsby's Cowboys that was printed in about 1902, and in there, Melvin's claiming that he gave Petti the idea for the Western Volunteer Cavalry guys. And, because Teddy was in the government, he got the first US Volunteer Cavalry, the Rough Riders.

Lori Walsh: Yeah. That's the thing that, they write books. They leave us this historical record, and we look back and we realize that some things never change.

Lori Walsh: As what people do, really.

Bill Hoskins: It's a great story.

Lori Walsh: Yeah. Yeah. But, really great stories and really influential even for us now. Bill Hoskins, we're going to be talking about Civil War veterans in the days ahead on Images of the Past, so thanks so much for getting us started, and we look forward to the next time we talk to you, as well.

Bill Hoskins: I always enjoy talking to you, Lori.