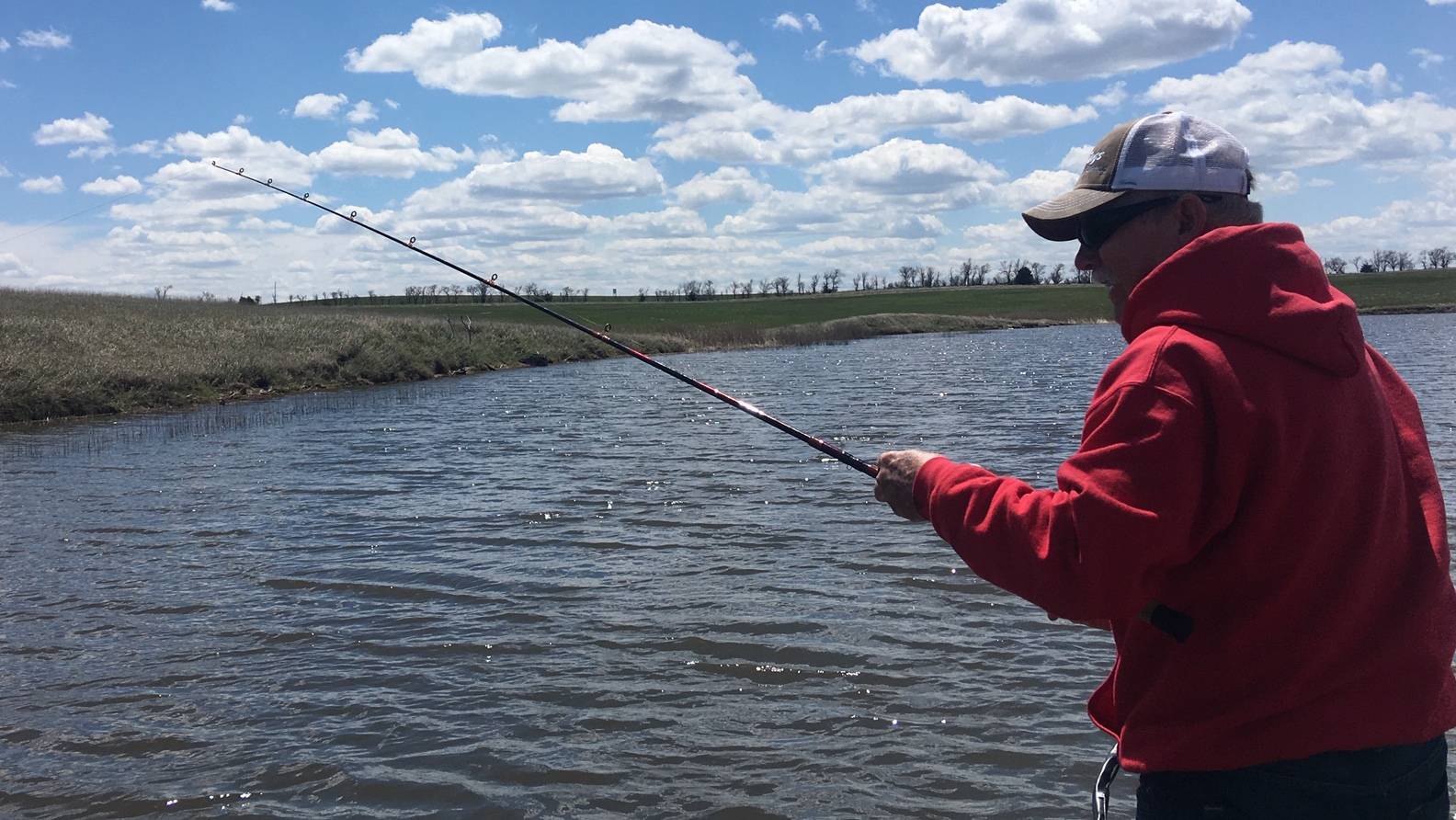 These things used to begin with a phone call. Now it’s more likely a text.

The latest arrived at 8:14 p.m. last Thursday, as I sat in the living room with Mary and watched an episode of Unforgotten, the most recent in a series of British crime dramas that have captivated us by way of Netflix and the PBS Masterpiece archives.

I heard the “ding” of the text and a few moments later reached over to check the screen of my iPhone, which read:

“I’m headed to Murdo tomorrow at 9:30 a.m. Want to meet me there? Promise you a five-pounder! Coop.”

“Coop” is John Cooper, a former law-enforcement agent for the U.S. Fish & Wildlife Service who followed up his federal wildlife career by serving as state Game, Fish & Parks Department secretary in the cabinets of Govs. Bill Janklow and Mike Rounds.

Coop sort of wound down his wildlife work by serving as an appointed member of the GF&P Commission, where he eventually was chairman. He’s mostly retired now, although that doesn’t mean all that much for the 74-year-old California native and Vietnam veteran.

It gives him more time to hunt and fish with his grandkids, and to send old friends an inviting text from time to time. But “retired” to Cooper does not mean disengaged. And I suspect it never will.

So he still gets called upon for some occasional consulting on conservation issues and to provide leadership and perspective to sporting groups on essential outdoor issues. That’s how he recently ended up representing a consortium of sportsmen in writing two letters to Gov. Kristi Noem.

One letter explained the strong opposition of the sportsmen to a controversial portion of Noem’s Second Century Initiative. The otherwise-fine program aimed at promoting habitat development and public-hunting access also includes a creature of controversy called the “nest-predator trapping” program.

Coop doesn’t much care for that, nor do the sportsmen he represents. But he also wrote a follow-up letter to Noem complimenting her on the habitat focus of the Second Century (of hunting) initiative, and offering support on the parts that would improve wildlife habitat across South Dakota and seek more access to private lands for the sporting public.

Big deals, those letters were. But that Thursday night text had import of its own, too.

“I’m heading for Murdo” meant Coop was planning a trip to Murdo Dam, a prairie impoundment of reasonable proportions a couple of miles north of Sen. John Thune’s hometown in Jones County.

I’m fond of pointing out to Thune in a complimentary way that Jones County is like the Blue Ridge Mountains of West Virginia praised in John Denver’s Take Me Home, Country Roads. Both are almost heaven, after all.

So while Jones County is not quite heaven, you can see it from there if you find a patch of high ground and look east, to Lyman County. There among other heavenly offerings, there are some notable fishing waters beyond the fabled Missouri River. They include Brakke Dam, Fate Dam and my personal favorite, for obvious reasons, Reliance Dam, which is just a six- or seven-minute trip on gravel — by Moped, if necessary, I proved as a 13-year-old — from the farm where I grew up.

Murdo Dam is pretty good, too, however. It's bigger than Reliance Dam with better facilities, including an improved-and-relocated boat ramp that local anglers and GF&P  worked together to build during Cooper's time with the agency. And Coop had reports that the largemouth bass there were 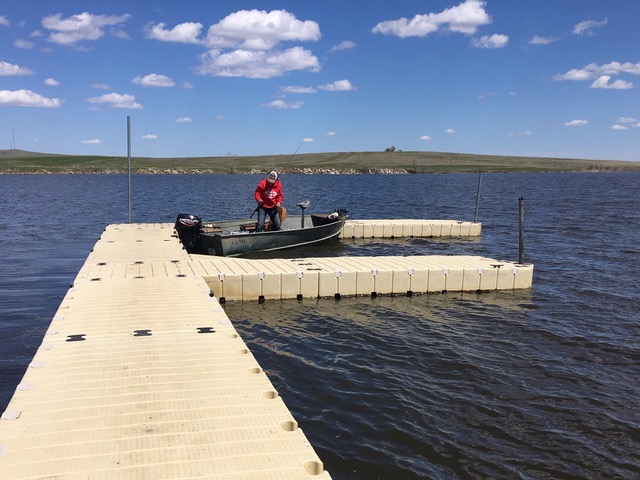 waking up after a late start due to unseasonably cold, wet weather. So after a brief moment of hyperventilation and a chat with Mary about her plans the following day, I responded to Coop with my own text:

“Just checked with my scheduler here. She says I can go!”

I’ve been going one place or the other in South Dakota to meet John Cooper at a fishable body of water for almost 40 years. Those trips have included throwing crankbaits and spoons for big northern pike up on Lake Oahe, jigging for walleyes on Oahe and Sharpe and a pitching jigs and plastic worms in a difficult-to-tabulate assortment of prairie stock dams and small lakes.

Among other prairie waters, we’ve been to Antelope and Beads on the Rosebud Reservation, to Lake Louise and Rosehill over in north-central South Dakota and to Richland and other waters on the Fort Pierre National Grasslands.

We have a routine that works pretty well, outlined briefly in Cooper’s follow-up text to me Thursday night:

“Sounds good! I’ll watch for you and will have my phone along. Give me a call when you arrive. I’ll have rods and all the tackle you need.”

He didn’t mention that he’d also have beverages, lunch and snacks. He didn’t have to. That’s just part of the deal. And it’s a pretty sweet one for me. I just show up and climb aboard whatever watercraft Coop has graciously hauled to the boat ramp.

For Murder Dam purposes, it was a sweet little 14-foot Lund with 9.9 outboard and bow-mount trolling motor, just right for waters of that size.

And a little windier than it was supposed to be

Our arrangement over the years has been Cooper brings the boat, the food and all the fishing gear, and I bring the bad weather. Or at least, complicating weather. And rarely have I failed there. I have been known to inspire a sudden storm front simply by removing  my fishing equipment from the back of a pickup truck anywhere near a large, fishable body of water.

Cooper has survived some of those gales.

All was quiet on the storm front for this trip, fortunately, and the temperature was expected to reach the 60s, which it did. But it felt chillier because the light winds originally expected for that day got more than a little pushy. That made Coop’s job of boat management trickier, and also fought the sun in its essential work of warming the water and warming the bass.

And coming off of a cold front that brought three or four days of rain and daily highs that were 25 to 30 degrees below normal, the bass were lethargic.  We cast pretty consistently — using the slow-down methods that improve your chances with languorous largemouths after a cold front — for four hours or so, to catch four fish. 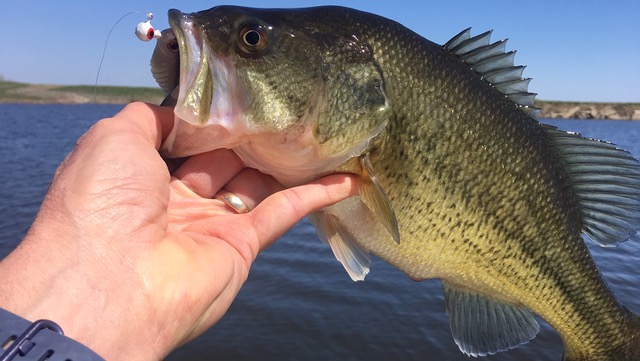 And the first and biggest of the four hit a 3 1/2-inch PowerBait smelt-pattern Ripple Shad on my second cast from the Murdo Dam boat ramp (I usually bring some gear of my own, despite Coop’s bigger, better-cared-for selection) as I waited to be picked up.

I mentioned the bass when Coop pulled up to the dock, but not before he mentioned my hat, a not-so-attractive old outback model that Crocodile Dundee might have refused to wear.

“Wow, that hat!” Coop said, reaching up to give a tug on his more standard baseball-style headwear.  “You’ve been hanging out with those Black Hills flyfishers too much.”

Before the day was over, I would show him three different hats, in fact. All three had brims of one kind or another designed to help me avoid another encounter with squamous cell carcinoma, which cost me half my left eyebrow but inadvertently tightened some of the wrinkles on my forehead a few years back.

Practical they are, those hats. Fashion statements they aren’t.

“I just figured you must have found a rummage sale on hats somewhere,” Coop said.

I suppose a guy could say that I was all hat and no fish. But that second-cast largemouth assured that I would not get skunked. After that, the fishing was hard but the conversation was easy.

Watching the birds while hunting for bass

And the surroundings? Well, they were positively sublime.

Springtime on prairie ponds is a glorious environment, full of life and color and sound and motion. We were the only anglers on the lake, and in good company.

For a time, we were joined by a diminutive, eared grebe, a blackish bird with rufous sides and golden feathers flaring away from its red eyes. The eared grebe is described in one of my bird books as "gregarious at all seasons," and when Cooper greeted it with "Why, hello there" it paddled up to within a few yards of the boat to observe us as we fished.

The grebe was in no hurry to leave us, and stayed close by as it casually resume grebe business, busily picking insects from the surface, dipping to take others just beneath it and occasionally diving deeper, maybe to pursue a minnow or two.

Larger western grebes — the black-and-white ones with the red eyes and the mating-season ballet that sends them dancing across the surface of the water— were scattered across the impoundment, diving deeper and staying under longer in their hunt for fish.

Mallards were paired up. Shovelers were winging past overhead. Blue-winged teal were sliding in for a landing on the surface.

There were red-winged blackbirds and yellow-headed blackbirds in the cattails and yellow warblers in the occasional shoreline bush or tree. And off in the grassy prairie surrounding the lake, upland sandpipers called out to the season with songs that ranged from their familiar twittering to that long, evocative in-flight “wolf whistle.”

And as if what we were seeing and hearing at the time wasn’t enough, we added to it with stories of things we had seen and heard elsewhere, at other times. They included Coop’s personal account of a merlin — the falcon, not the magician or the old BBC TV series — taking a collared dove out to dinner.

And beyond birds, Coop spoke of taking an old fishing buddy out for a meal and one last trip up on Lake Oahe. Bob was nearing the end and suffering from dementia, but once Coop put him on that familiar lake catching those familiar fish, he was like his old self again.

Just for a while, out on the water, where instinct and muscle memory took over.

Bob is gone now, along with other friends and anglers in our age group. Two Johns have been subtracted from our world, along with one Tony and a Bob. But Rick is still going strong, Coop said, which reminded me that I have to reach out to Steve and see if he’s still hunting white bass on the Missouri River this time of the year.

Reaching out — to friends, to familiar places, to wild things and to enduring memories —  is what these trips are all about.

That and a little lunch and an early start for the drive home, which is a good idea for older fellows at the wheel who might slide toward the sleepy side after the sun goes down.

“Say ‘Hi’ to Mary,” Coop said as we shook hands at the ramp.

And with that we ended our day on the water. But not the texts. Or the trips. Or the emails, either. There was one of those waiting when I got home.

“Really enjoyed our day together,” Coop wrote. “Always good to talk and laugh, even if the bass kicked our butts.”

They do their fair share of that, especially after a cold front with just a little too much wind on the water.

Next time, though, I know we’ll get that 5-pounder.

Meanwhile, I'll be watching for that next text. 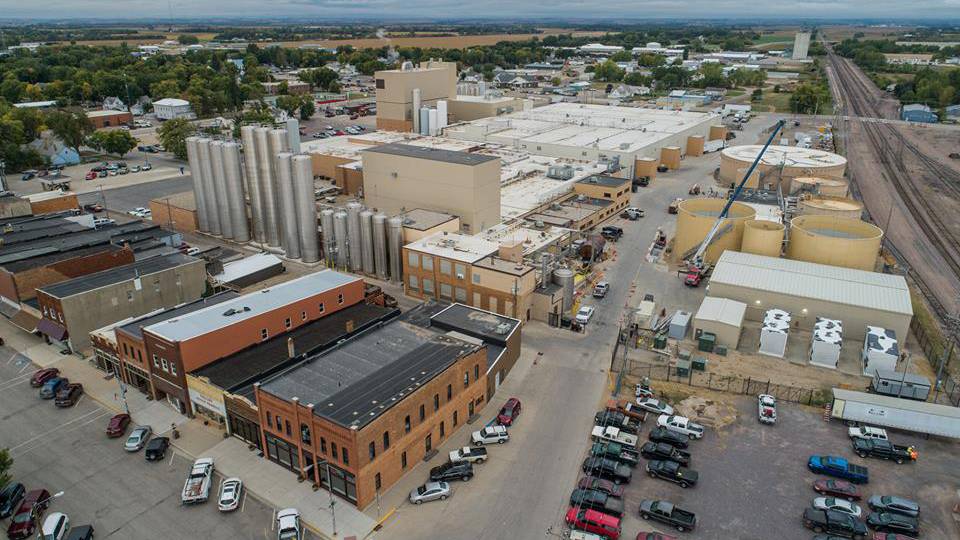 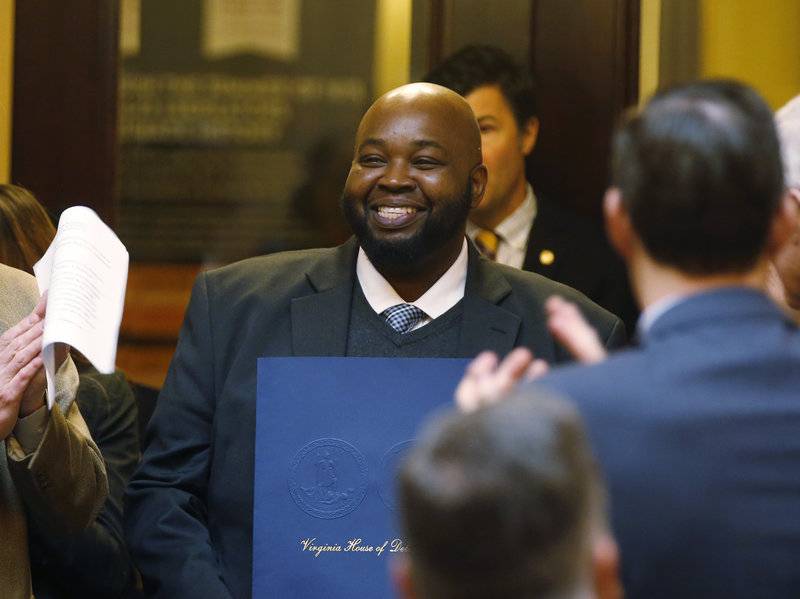