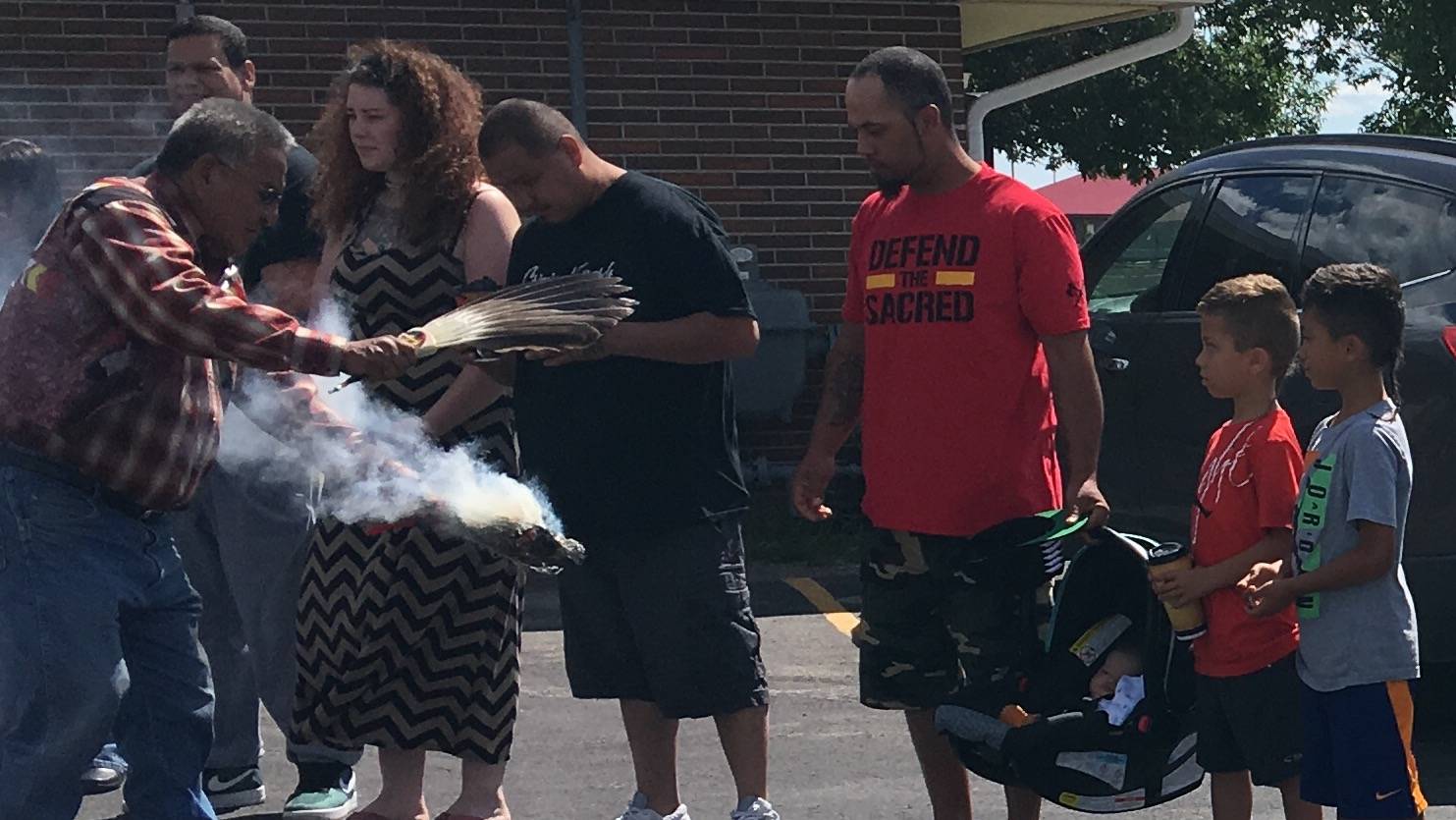 With burning sage, Sonny Richards smudges marchers against meth
On the Other Hand

As the circle began to take shape Saturday morning — one human being at a time — in front of  the Mother Butler Center in North Rapid, Richie Richards spoke of the nephew he lost to meth and murder.

“He was a family guy, someone who brought a lot of humor to our family,” Richards said. “And now, his beautiful children are left without a father.”

Largely because of meth, Richards believes.

Baptiste White Eyes was shot and killed by 21-year-old Jared Stone in April of 2016, following an altercation outside the Lucky Lady Casino in Sioux Falls. A jury later found Stone guilty of second-degree murder, first-degree manslaughter, possession of a controlled substance and weapons possession by a convicted drug offender.

Stone was sentenced to life in prison. And White Eyes family members have their own sentence: a life without a loved one who lost his way because of meth, ended up behind bars and was struggling to reconstruct his life outside of prison when the shooting occurred.

“His death really affected our family,” Richards said. “And as a journalist and community leader here in Rapid City, I felt I needed to do what I can to prevent this from happening again.”

He won’t, of course. It will happen again. And again. Meth is a monster that way.

But lives can be saved and painful family losses prevented or at least reduced with more community involvement in the battle against methamphetamine.

Which is why Richards, his uncle, Sonny Richards, and others with a personal, family stake in drug-abuse prevention and intervention gathered Saturday morning for prayer, smudging and eventually a march through North Rapid neighborhoods where meth is disrupting and in some cases destroying lives.

The Meth Awareness Four Directions March was coordinated by Rapid City Collective Impact, a broad-based initiative aimed at improving the quality of life and addressing problems in Rapid City. But the foundation of the event was built on many other groups and individuals, too.

There was another group involved, too, with another Richards driving it. Julie Richards is Richie’s cousin, and she shaped pain and anger over impacts of meth on her own family into the Mothers Against Meth Alliance, centered on the Pine Ridge Reservation.

Julie Richards is a powerfully outspoken and strong woman, who has faced threats and vandalism from meth dealers without flinching or turning away from the fight. When I worked for KELO TV, I covered some of Julie’s anti-meth marches and other events on the Pine Ridge. I didn't’t see her at the march on Saturday, but Richie says she’s still in the middle of the fight, especially out on the sprawling reservation.

A warrior, after all, is not a term tied to gender — especially in battles like this.

“She is very much a warrior,” Richie said of Julie. “Women on many levels are leading the movements lately.”

The anti-meth movement traveled on Saturday through North Rapid and its heavy concentration of low-income, Native American neighborhoods, which Richards called a “high risk” area for meth use and the human carnage it can produce.

It can’t go on without a response, and not just from law enforcement, Richards said.

“It’s very important that the people of North Rapid know that we are with them, that we are part of them,” he said. “Whether or not you want to believe it, we’ll be walking past homes where parents should be up making breakfast for their children … but instead they’re probably sitting in a room, high out of their minds.”

That’s not the majority, of course.  But a troublesome minority of meth users and dealers cause great harm to their own loved ones and to the safety and quality of life of the great majority of Native people who are simply working to make a living and care for themselves and their families.

“We need to help them find their way back,” he said.

They have a place of support waiting for them if and when they do.

Meanwhile, he said, meth use must be opposed at every opportunity.

“We can’t turn a blind eye on this,” Richards said. “If we do, we have a circle of leaders that have ignored them.”

Richards said he and others in leadership roles will not let that happen.

The  circle of leaders grew to 70 or 80 Saturday, as the collected in front of the Mother Butler Center. Mother Butler is a rallying point and community center adjoining St. Isaa Jogues Catholic Church, where Father Ed Witt serves as pastor and ministers to the North Rapid community.

Father Witt joined the prayer circle before the march, embracing Sonny Richards as Catholic and Native American spiritualists joined together in the fight against the meth plague. It's a battle that need all the forces it can organize.

Also joining in was Senior Officer Tim Doyle, a liaison officer at Rapid City Central High School and the only survivor of a North Rapid shootout in August of 2011 that wounded Doyle and killed two officers and a 22-year-old Native American man.

I was the night reporter for the Rapid City Journal that day, and had just come on shift when "officers down" screamed out over the newsroom police scanner.

Daniel Tiger had attended Isaac Jogues as a youth with his grandmother, a church elder. But he came to struggle with drug and alcohol abuse and had been in and out of jail and prison for several years prior initiating an explosion of violence that even Tiger’s Native companions that day later said was not provoked by police.

During an afternoon stop by the three officers on a sidewalk in North Rapid nor far from Saturdays' march route, Tiger pulled a .357 caliber handgun and shot Officers Ryan McCandless, Nick Armstrong and Doyle, before being fatally wounded in return fire.

McCandless died that day. Tiger died the next day. Armstrong a few days later. Shot in the face and chest, Doyle eventually recovered and returned to duty — and continues to work with and for Native children at Central High School and in North Rapid.

Doyle said he joined the march for the same reason other participants did — to support the community and fight meth use, especially among kids.

“It’s hitting younger and younger,” Doyle said, as he hustled to catch up to the departing marchers. “We have 11- and 12-year-old kids who are getting into it.”

Doyle said anti-meth marches and community involvement help. But it’s especially important that family members create an environment where children feel secure and loved and are less likely to be vulnerable to meth and other drugs.

Sonny Richards, who led prayers and smudged those in the circle with burning sage, agreed that strength of family creates the strength for children to resist meth.

“Be there for your children and love them,” Richards said. “As parents, we must be the providers and the protectors.”

“It’s up to the warriors to stand up,” he said. “If we are warriors, we have to make a stand.”

They stood up on Saturday. Then they prayed. They marched. And they promised it won’t be the last time.

The march against meth will go on. 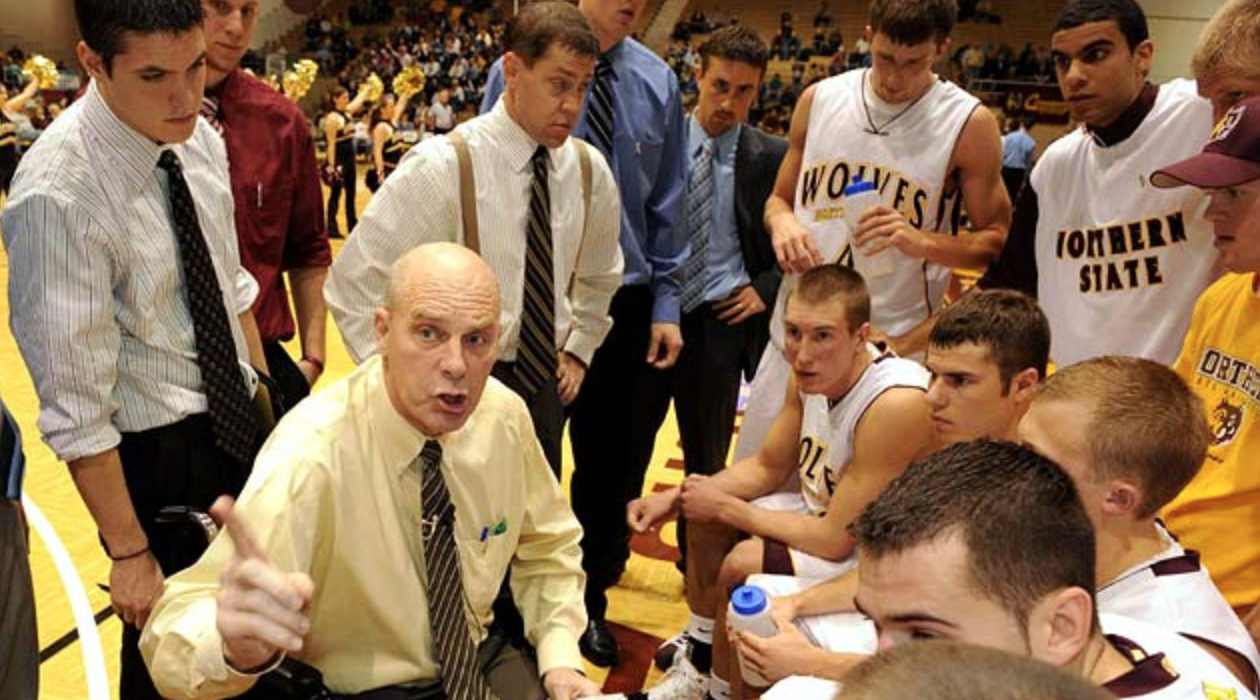 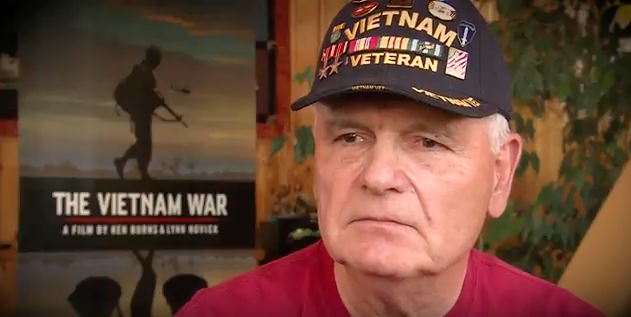