This summer, the U.S. Army Corps of Engineers is taking new steps to prevent and limit damage to the dams along the Missouri River. Invasive zebra mussels are clogging up power generating systems and could increase rates for customers.

Gary Hinkle, deputy chief of operations in Omaha for the U.S. Army Corps of Engineers, said Gavin’s Point Dam in Yankton County has been hit the hardest so far.

“For the summer of 2020, Gavin’s had to have each of the three units shutdown at three different times to clear the zebra mussels from the cooling water piping,” Hinkle said. “A typical Gavin’s point outage for a week could be up to 50,000 dollars in lost revenue.”

Hinkle said that loss of revenue could raise utility prices for customers of the Western Area Power Administration.

“People that benefit from the power that we produce actually have an arrangement where they will provide the government upfront funding for important projects, usually capital improvement projects,” he said.

According to Hinkle, zebra mussel damage has not caused prices to rise yet.

Gavin’s Point Dam is the only one on the reservoir that’s needed maintenance for a zebra mussel infestation so far. But the Army Corps is using other methods to prevent the zebra mussels from spreading.

“You’re probably talking a good month to remove all the air coolers and clean them out and so forth so that’s a lot of revenue loss,” Kieffer said. “It could be millions in lost  revenue just for an outage to take care of something and you know that can be easily treated for $25,000 to 30,000 a year using or put an EarthTec QZ chemical in an injection system.”

To get ahead of the problem, Kieffer said Fort Randall Dam will inject a diluted copper ion solution into the cooling system of the dam later this summer. It will knock zebra mussel colonies out of the piping.

Kieffer said even further upstream at the Big Bend Dam, they are using a copper generator that works similarly to the copper ion solution. Both facilities received pesticide permits from the state to use copper in their cooling system because the copper eventually makes its way downstream.

Hargrave said the Corps will continue to watch levels of copper concentration.

Zebra mussels are native to Eurasia, but hitchhiked in the ballast tanks of ocean-going ships. They were first discovered in the Great Lakes in 1988. Since then, the mussels have lake hopped to other waterways across the U.S.

Tiny young zebra mussels are called veligers. UV light systems can destroy them, – a technique the Corps is trying in some locations.

Harrington said that’s the reason for a state law that makes people take their boat plug out - when moving from one body of water to another. 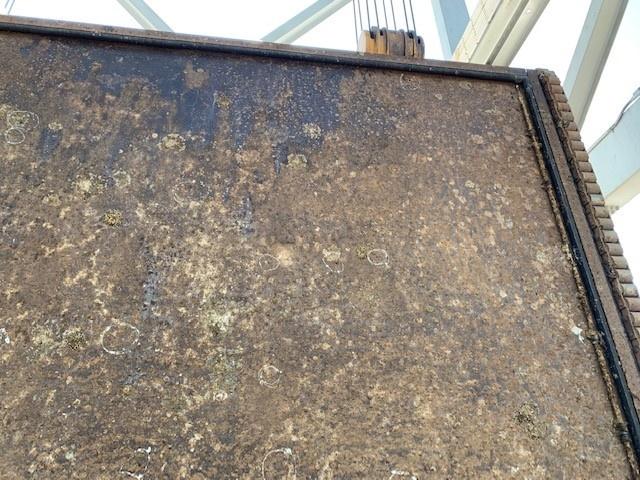 1 / 2
Share This Gallery
Images of the water intake gates at Big Bend Dam show before zebra mussels colonized and after they attached to the gate. 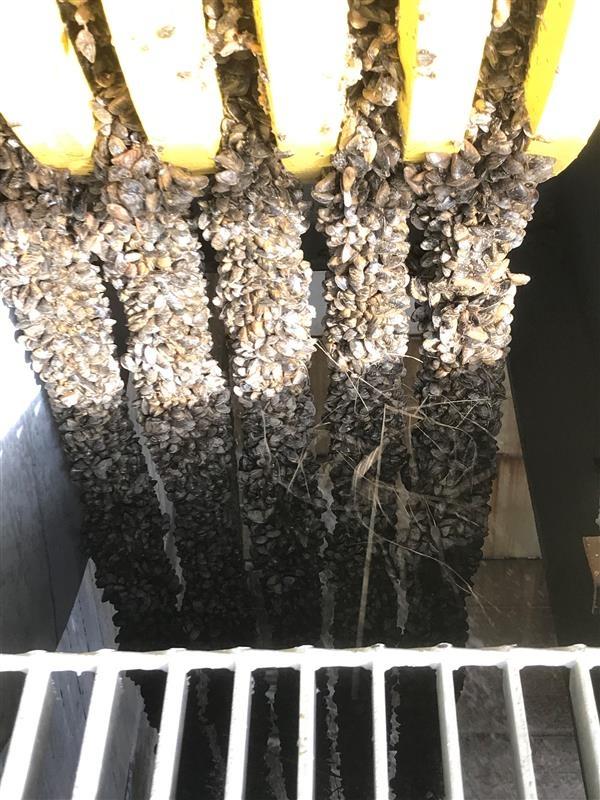 2 / 2
Share This Gallery
Images of the water intake gates at Big Bend Dam show before zebra mussels colonized and after they attached to the gate.