Mickelson Trail Trek organizers make a point of letting riders know that Day Two is the hard one. The reason they give has less to do with the distance (39.5 miles) than with the many long uphill and downhill stretches that riders will have to deal with between Custer and Rochford.

The reason organizers don't offer to is unspoken but clear to almost everyone who rode on Day One. Some riders might be a little stiff and sore, or even more than a little bit so.That was the case with our riding companion, Kent Porter from Omaha. He'd endured Day One on a pretty decent rental bicycle, but you could compare riding out on an unfamiliar bike to hiking out a long-ish backpacking trip with a brand new pair of boots. Something's going to have to get broken-in. It might not be the boots and it won't be the bike saddle. Heeding the advice of his wife, who happens to be a physician, Kent wisely decided to drive our support vehicle for the remainder of the trip.

People start their day of riding at different times. There's no group start but there is kind of a pattern. In my two years of riding the Mickelson Trail Trek as a participant and one covering it for SDPB, I've noticed that a few riders will hit the trail at oh-dark-hundred. I know this from having been one of them once, and only once. The largest group of riders leaves two, three, or four at a time within half an hour of the official 8:00 am start time. A few people start riding just before 10:00 am at the closing side of the official departure window. Riders can start any time they want to but there are shuttle logistics at the end of the day's ride and it's better to not keep people waiting. Today, we were going to be leaving somewhere in the middle of the third group. - BG

I think Brian and I had every intent to get on the trail a little earlier, there wasn't any rain on Saturday, just a cooler. But it seemed like little things conspired against us. Tweaks to the bikes, before we left town a stop at Shopco for some gloves, my back tire felt low and the first service station with a serviceable air pump was on the southeast end of Custer while the trail leaves Custer to the northwest. So our ride started towards the back of the pack and uphill.

There are several beautiful photos op's in those first miles, away from the highway and heading through canyon and pasture uphill towards Crazy Horse. It was a nice distraction to my already tight legs. My two wheeled recumbent's center of gravity puts more pressure on the back tire adding slightly to the work load of each pedal stroke. So my goal in the opening miles was to find the gear that I could sustain over multiple miles and still make time. As much as I wanted to stay on the middle crack gear, I dropped to the lowest and settled for second or third on the back wheel. They are a couple of my lowest gears, but with a decent cadence, I was maintaining 6 to 7 mph on the uphill stretches. - LR

I thought of Day 2 from Custer to Rochford in five parts and three of them are uphill: about 7 miles up out of Custer to Crazy Horse; 9 downhill to Hill City; a break and then 8 uphill out of Hill City with a quick transition to 8 down hill to Mystic; other break then the final 7ish up hill to Rochford... no in between. And the speed variation from that 6 mph on the uphill streaches to riding the breaks to keep it around 20mph going down. The trail is in great shape and the 20mph does not feel loose and I was passed more than I passed anyone. Brian and I didn't stay on each other's wheel, his uphill pace was quicker and sometimes I caught up going down and sometimes not. I did miss Kent today and was hoping he would be on board for Sunday. - LR

The central Black Hills are home to Black Elk Peak, Sylvan Lake, the Needles, and of course Mount Rushmore. One of these days there might be a new recreational trail connecting the Mickelson Trail to Mount Rushmore National Monument. It's going to be expensive and it won't happen quickly, but some serious people are working on it. We'll see.

I didn't happen to notice any support riders on the first day of the Trek. Several volunteer riders are spread out over a day's route. It's good to know that there's somebody looking out for you if you get a flat or worse.

Just about everyone stops to look at and photograph the Crazy Horse sculpture north of Custer. They might also be stopping because they've been pedaling up the railroad grade for a number of miles and they've hit the divide between one watershed and the next. It's a good idea to check brakes here, the downhill run to Hill City can ridden at a fairly spritely pace. Actually, riders may find the limit of their need for speed on this crushed rock riding surface. (By the way, most of the trail is in excellent condition and all of it is good. Even so, things can fall onto the trail and there can be soft spots so riders really ought exercise their best judgement on the downhills.)

I was looking forward to the streach from Hill City to Rochford. It's in the central western hills, and the tree profile has more aspens (showing their fall colors) and thick stand of Black Hills spruce. In general, it's a less traveled part of the hills and I love the views, sounds, and smells.

A reward for the uphill hours on your legs are the tunnels. Four in all on the trail and three of them are just a few miles either side of Mystic. - LR

The long uphill grade out of Hill City ends with a speedy downhill into Mystic. It's the official GFP rest stop on this stretch so there's water and whatever else you might need. They don't have snacks but that's totally o.k. because a coupld of miles north of Mystic comes the sweet high point of the day for a lot of riders. Every year for many years, a group of Mystic area home and property owners bring water, coffee, and a TON of homemade baked goods to the trailside. Cookies and bars and muffins, oh my. Everyone on the ride really appreciates this generosity on the part of the property owners and most take the time to thank them. As I will do here: Thank You!!

There are a couple of tunnels on either side of Mystic. It's easy to see that a lot of engineering and work had to be applied to the construction of the railroad line through this part of the Hills. It's also easy to see that the Trail has passed into a different sort of eco-system. There is less Ponderosa pine and a lot more white spruce, aka "Black Hills Spruce." There's less of the granite predominant in the central Black Hills and more sedimentary rock. Sharp-looking slabs of gray rock streaked with black and orange minerals stick out of the ground at various angles. The Trail is adjacent to small streams in several places and this year they are running high. As you ride upstream you see numerous rapids and one or two small waterfalls. A few people stop to take pictures or, like me, just watch and listen.

At the end of the day's ride, bikes are left in a large parking area and people walk about a quarter of a mile into the little village of Rochford, which amounts to several houses, a bar, a store, and a public meeting hall.

There's a lunch of sloppy Joes and fresh vegetables available in the meeting hall. A large tent has been set up in an open area about a block away and a band is playing. Large coolers have been lugged out of support cars and there's a party atmosphere in the tent, but it's still cold outside so a lot of people are sitting at tables inside the Moonshine Gulch Saloon, Rochford's old and venerable watering hole. Pop, beer and food are also available at Rochford's general store.

At the end of Day Two, Trail Trek participants and their crews need to live with a choice they ought to have made well ahead of time. Be shuttled back to Custer and stay there overnight, or go back to Custer, get in a vehicle, and drive to Deadwood for an overnight stay. Sunday morning, shuttle busses will start carrying riders from Deadwood back to their bikes in Rochford at 7:00 am. - Brian Gevik

By the time were left Mystic for the final streatch, I was counting the mile markers. We left Custer passing marker "44" so Rochford would be just past "83". It was! I coraled the bike, slowly walked up to the Rochford Community building for lunch. I knew I was tired when I realized how slLarry Rohrer​owly I was chewing my sandwich and veggies. Brian and Kent took me back to Custer for my car and we were off to overnight in Deadwood. The car ride was a bit of a recovery, but honest to god, I was in Deadwood on Saturday night and never left my room. - Larry Rohrer 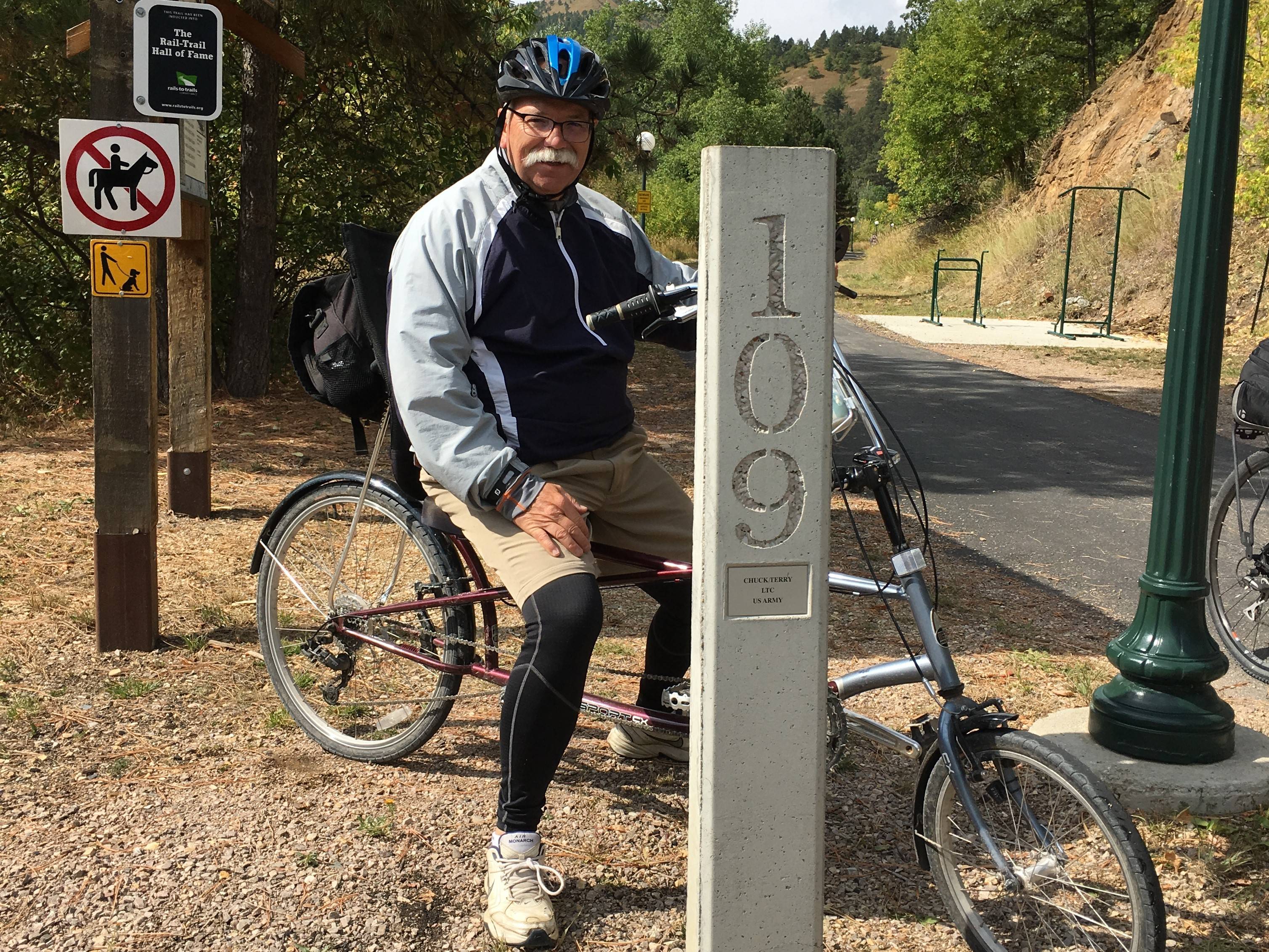 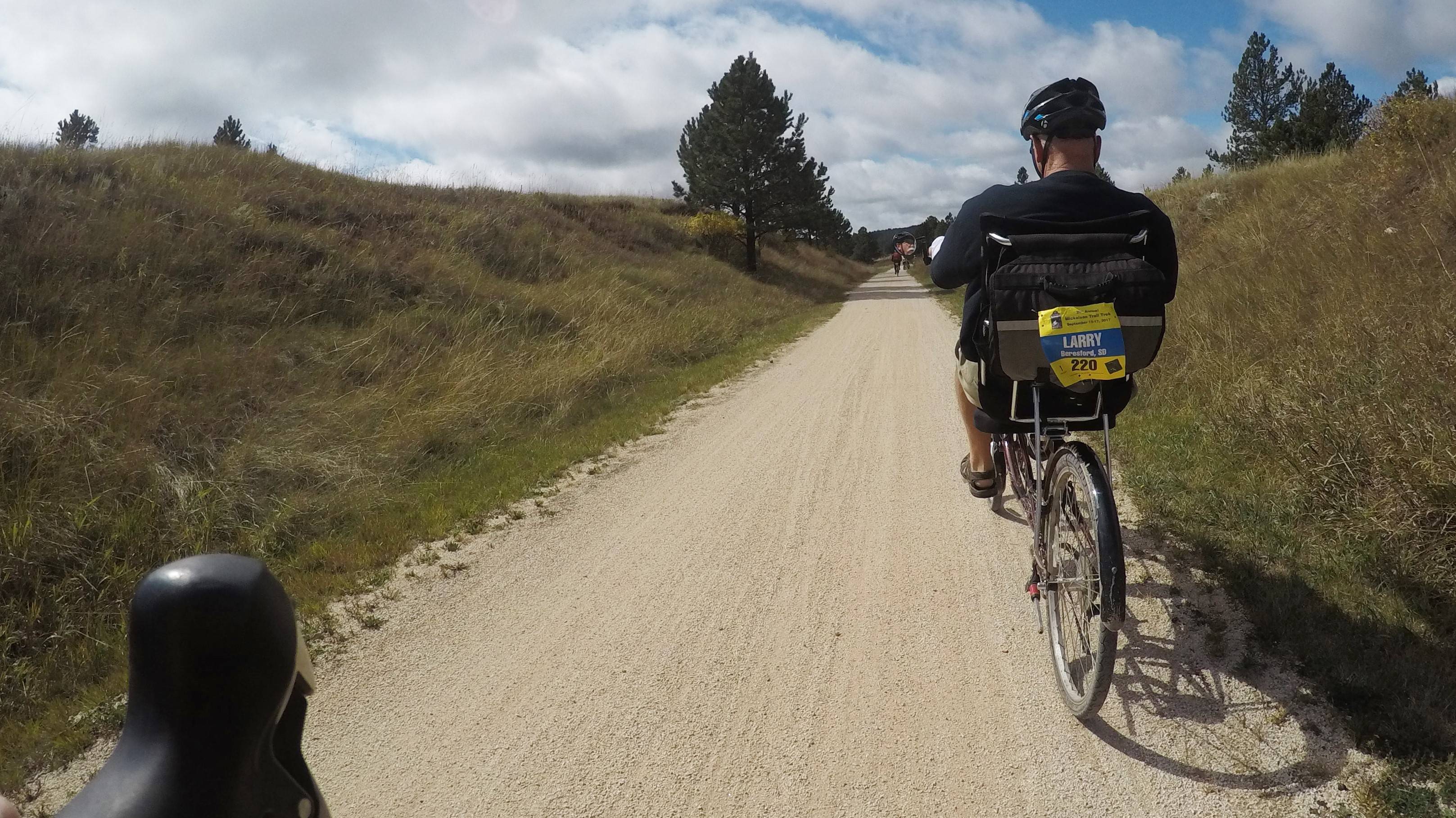