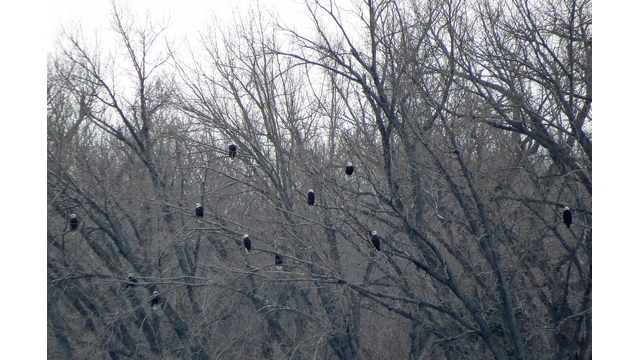 Our national bird is a common sight along the Missouri River and other waterways throughout South Dakota, but the Lake Andes National Wildlife Refuge (NWR) Complex may be one of the best spots in the state for eagle watching.

The complex includes the Karl E. Mundt NWR and the Lake Andes Wetland Management District. The nutrient-rich lake in Southeastern South Dakota is a stopover for many species of waterfowl and waterbirds. Eagles tend to migrate with waterfowl. Where they go, there will be food sources, like fish, and the waterfowl themselves make for another food source.

Recently dozens of eagles could be seen, perched high in large cottonwoods around the lakeshore or standing atop melting ice drifts. They were there for the buffet — thousands of dead carp there for the taking.

A large algae bloom had temporarily lowered the oxygen content in the water, causing a massive fishkill. Then the cold froze thousands of carp in sheets of ice atop the lake. At lake’s edge, sheets shifted like glaciers and bowed exposing the tail ends of wild-caught fish stcks.

Eagles and other fish eaters laid in wait until the thaw. When the thaw came, the pale-headed hunters ringed round the lake for a feast to rival Caligula.

The algae bloom that set in motion the carp massacre was fed by high levels of phosphorus and nitrogen in the water, the byproducts of fertilizer runoff. The eagles didn’t mind, and the carp will recover. Runoff can cause problems for the ecosystem at Lake Andes however.

“Low dissolved oxygen negatively affects fish, invertebrates, aquatic plants, algae and even chemical processes important to lake functioning,” says Lake Andes NWR Project Leader, Michael Bryant. “When algae or even dead fish decompose this consumes dissolved oxygen in the water. It’s interesting to note that the feeding behavior of carp (they stir up the sediment on the bottom) reduces light penetration in the water and reduces the potential for photosynthesis in the lake, which is unfortunate because photosynthesis produces oxygen.“

This June on a segment of our SDPB-original series DAKOTA LIFE, we’ll take a closer look at Lake Andes and the Karl E. Mundt NWR. Named after the long-serving South Dakota Senator who was instrumental in designating the refuge as federally protected land, the Mundt NWR was founded in 1974 specifically as a refuge for bald eagles. At the time, the American icon was in serious decline, another of the avian species nearly decimated by unforeseen effects of the insecticide DDT. Since that time, bald eagles have made such a determined comeback that in 2007 the US Fish and Wildlife Service removed them from the list of Endangered and Threatened Species.

The Karl E. Mundt Refuge is a clever use of human intervention to the advantage of wildlife. Because it's located on the Missouri river just below the Fort Randall Dam, the water stays open and mostly free of ice-cover year round, providing a hunting grounds even when much of the Missouri in this region can be iced over.

Bald eagles look for a confluence of factors to provide the ideal habitat: open water, tall sturdy trees — like the cottonwoods along the Missouri and around Lake Andes — that can support their enormous nests and give them watch over fish and waterfowl, and lightly wooded open terrain for hunting pedestrian prey. Opportunistic feeders, they like having options, and will conserve energy, if say, a lake buffet is available, or joust with a snow goose in midair if they need to.

The complement of ecosystems at The Lake Andes Complex attracts many eagles, and other bird world rock stars like snowy owls as well, making it a worthy stop on any birders itinerary. The Fifth Annual Birding Festival at Fort Randall, which will be held May 1-3, is as a good a time as any. 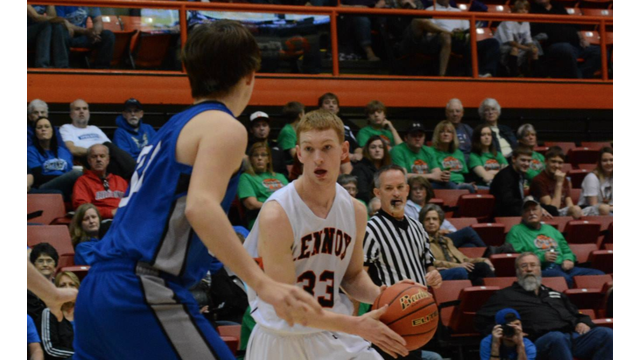 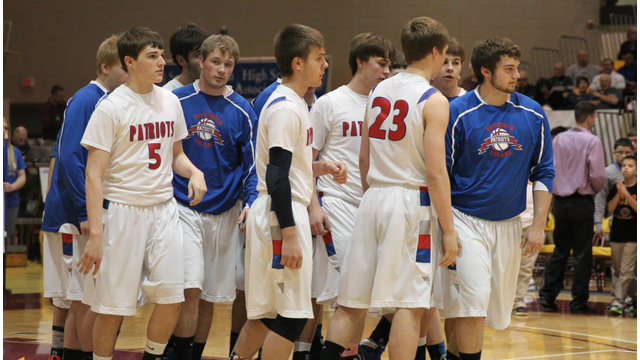