From Fort to Field on the Mighty Mo 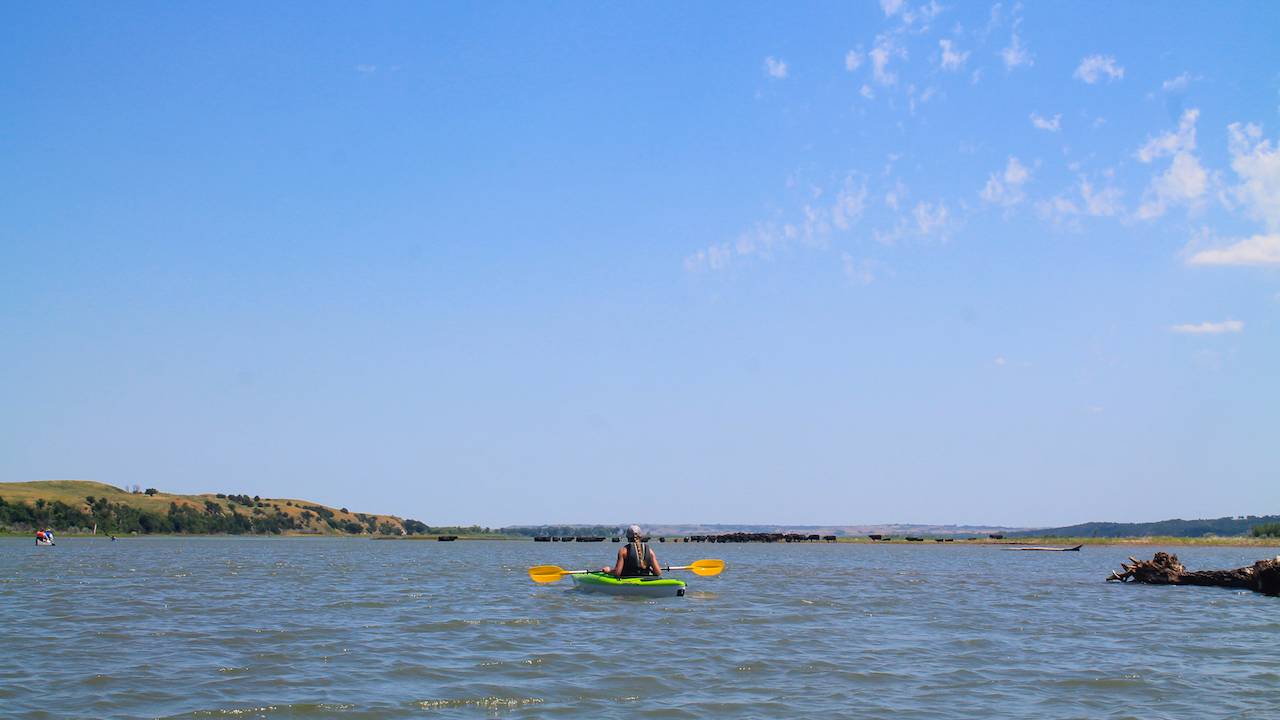 The Fort to Field 50 brings paddlers together from around the region and beyond to explore one of the two pristine stretches of the Mighty Mo that together form the Missouri National Recreational River.

Last Saturday at 7am, 81 souls launched their vessels Springfield-bound from the Randall Creek Recreation Area. The F2F covers all of the 39 mile Northwestern stretch of the MNRR, plus another eleven miles. The South Dakota Kayak Challenge (SDKC) covers the Southeastern 59 and then some.

The river is the whole draw at the F2F. There aren’t many Michelin-starred restaurants or modish gastropubs in the area, though Norm’s Liquor in Springfield does have a cool Hamm’s sign out front, and sometimes karaoke.

The Big Muddy is a mercurial body, shape-shifting and altering landscapes as it sees fit. But in the stretches that make up the MNRR, change is more something the river does than something done to it. The river writhes like a big bull snake on the land, and the ground more or less makes way. Between the dams that harness its power, the wild Missouri expands, contracts and meanders as it wants.

Roughly eight river miles south of Pickstown (on the first leg of the F2F) Lewis and Clark’s Corps of Discovery spotted a dome-shaped hill — now known as Tower Hill or Old Baldy — on the Nebraska side. They docked the keel boat they were wrestling upstream and climbed the hill, where Clark wrote that they “discovered a Village of Small animals that burrow in the grown [sic] (those animals are Called by the french Pitite [sic] Chien).” The Corps whiled away a few hours trying to catch one of those "little dogs" by dumping barrels of water into their holes. Finally, they captured one for special delivery it to President Jefferson.

The Old Baldy dog town is gone. And the “Greid many Buffalow & white wolves” they encountered in the area. The river remains. In some hidden channel an eddy plays an endless loop of dogsong. And paddling in the shadow of Old Baldy, past sheer chalkstone bluffs, and reedy islands rustling with river critters its possible to imagine the scene as they saw it, and the Ponca people who were already there had known it.

Your correspondent arrived at the Springfield Recreation Area in beautiful Bon Homme County on Friday afternoon. The idea is to drop your boat and camping gear (if you’re camping) off at Randall Creek Rec, then drop your car at the finish line and catch the shuttle back to RCR. The shuttle in this case was a school bus outfitted with futons, corded stand-up fans and a full-size fridge stocked with Busch tall cans.

The shuttle made a run to the Wagner Gus Stop then rolled into RCR. I met John from Sioux Falls and Ashley from Omaha, both first-timing on the Mo, and assured them that fifty miles couldn’t be that bad, or at least had to be easier than the SDKC’s 72.

The safety briefing kicked off with a welcome from MNRR Superintendent Daniel Peterson, who seems sincerely enamored of this relatively unknown Park. Race organizer Jarett Bies covered the requisite advisories then called out raffle numbers. John from Sioux Falls won a slick carbon fiber paddle. A guy from New Approach South Dakota announced that he was gathering signatures for petitions to legalize medical and recreational marijuana.

The caterer forgot to show up, so the shuttle took a group to Fort Randall casino for dinner. I had some trail mix and a couple Shiners and talked river talk under a big full moon with John and Ashley till it was time to turn in.

A 4am thunderstorm interrupted the night’s sleep, making for a groggy morning, but some coffee and Casey’s-brand breakfast pizza got me rarin’ to go. The boats lined up at the start in the cool morning air to wait for the starting gun. There were serious paddlers with sleek fiber glass kayaks and surf skis, and a couple guys with a heavily cooler-laden canoe they called the Party Barge. At seven we were off, and John and Ashley quickly outpaced this (very) slightly more experienced river rat.

The morning mist burned off quick as the thermometer climbed its way toward ninety, which was better then Sunday’s high around 100. I was glad I brought a three-liter CamelBak in addition to a water bottle I could refill at the checkpoints.

At one point on the journey a river cattle crossing conjured images of cowboys driving beeves toward the iron horse, bound for the Chicago stockyards.

The F2F route passes one Nebraska river burg where speedboats and jet skis make their wakes, where you could slip into a Luddite-ish contempt for motors if you haven’t built up an immunity to that kind of thinking. Most of the way the river looks like it probably has since canoes were carved or burned out of wood.

After the first sixteen mile leg, a volunteer at checkpoint one helped me get the skeg unstuck on my borrowed kayak, which helped lessen the zigzagging. After the next, better twelve, I figured the rest would be easy.

Then a headwind came in somewhere around the confluence of the Missouri with the Niobrara. Clark described the Niobrara as “not navagable… Throwing out Sands like the Platt (only Corser) forming bars in its mouth.” If it can suck you in, the Niobrara will chew you up. It’s best to stay river left.

Finally, the river widened out again but the headwind only got stronger on the way to Running Water and checkpoint three. As Standing Bear bridge came into view it seemed to float down river at roughly the speed I chased it. My shoulders reminded me that I haven’t exactly mastered the whole more-push-than-pull thing on the stroke. But then came Running Water around the bend.

I’d been told that the last eight miles are like riding a kayak on one of those airport conveyor belts through a cool breeze flitted through by butterflies trailing rainbows but it didn’t work out that way. Finding the way forward isn’t always easy. There are numerous channels and choices on the Mo. Sometimes what looks like a channel might be a dead end. Making a wrong choice will add distance to the finish.

Kayakers up ahead started to look confused. Then there weren’t any other paddlers in sight. Shadows got longer while the sun got hotter. Toothy beasts rustled in the reeds. Giant prehistoric pallid sturgeon nursed ancient grudges just beneath the surface. As-yet-undiscovered poisonous water serpents lurked. Then, around a bend, the cool blue Springfield water tower beckoned like a tall glass of ice water with a pointed cap.

Jarett and crew pulled me out and helped me stand up on stiff legs. John and Ashley were already long gone. I had barely beat the Party Bargers, who looked as if the party had bailed the barge. I can say I’ve paddled both stretches of the MNRR, an accomplishment that will not get me a spread in Outside magazine, or much of anything but a few blisters and some more memories on the Missouri. For that, I’ll be back. 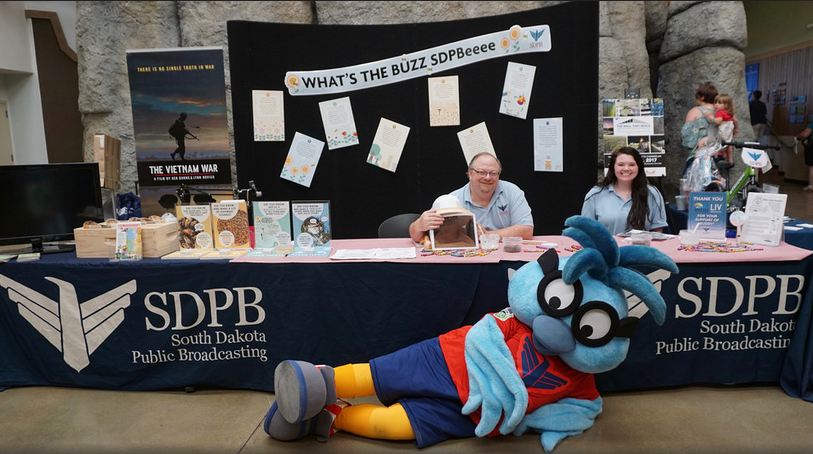 previous Post
Learn
Buddy & SDPB at Storybook Land
by krystal schoenbauer
•
next Post
On the Other Hand
In an era of the impolite, South Dakotans cling to courtesy -- even at contentious town hall
by kevin woster
•
next Post 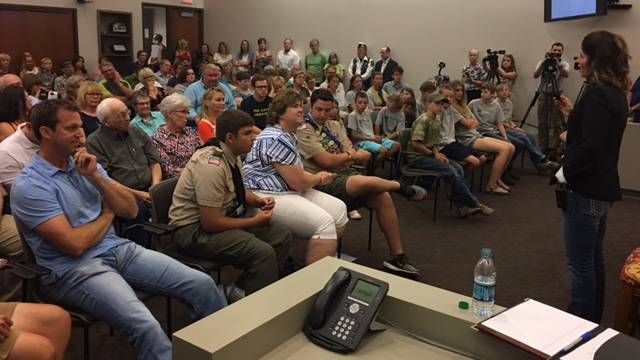